THE KILLING OF GEORGE BELVERSTONE – How an easily-led and impressionable young man met his death at the hands – and fists – of a man known as ‘The Russian Hog’.

DEATH IN THE FENS – the killing of John Robbie Auger

THE ADVERSARY by EMMANUEL CARRERE – the true story of Jean-Claude Romand, and his living lie.

“and OVER HERE!” The story of wartime executions of American servicemen at Shepton Mallet prison

A CRIMINAL ANCESTOR – The story of a man transported for theft, and the family he left behind

A PILGRIMAGE – In search of William Tyler and Ralph Joscelyne

THE WYLIE – HOFFERT CASE: A guest post by Robert K Tanenbaum, lawyer and writer. He believes that this double rape-murder was the biggest murder case of the century.

THE FRAUDSTER WHO FOOLED THE BANK OF ENGLAND: A guest post  by Nicholas Booth. The tale of Austin Bidwell.

LONDON HAS DRAWN CRIME WRITERS to itself like a flame beckoning moths. This is hardly surprising since, in real life, the capital has been the stage set against which some of Britain’s most sensational crimes have been played out. This account is, of course, highly selective – and subjective. Some old favourites – like The Whitechapel Murders – could not be left out, but there are also some lesser known horrors selected, particularly representing the less-than-leafy suburbs. Most modern crimes have been left out, not through any judgment on their significance, but rather from the view of practicality. The almost weekly butchery of young men due to gang crime is a national scandal, but would take up a website of its own. Coverage of these twenty four crimes moves not chronologically, but on a general north – south axis. 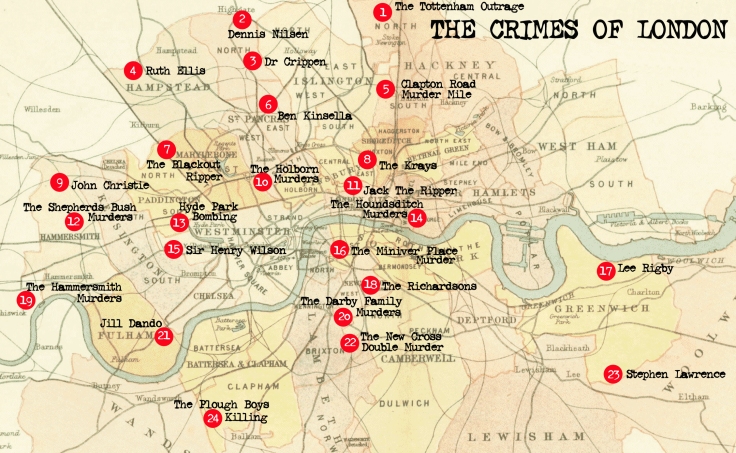 Each link takes you to a separate page with details about the crime.