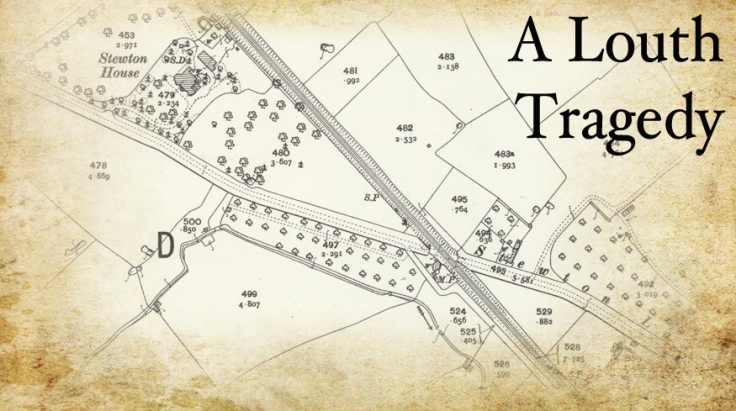 ON SATURDAY 23rd JULY, 1927, Bertram Horace Kirby was told in Louth Magistrates Court that he would be sent to the next Lincoln Assizes to be tried for the murder of his wife on Tuesday 11th July. Throughout the hearing, Kirby had spoken only once, to tell the court that he was handing everything over to his solicitor, and would have nothing more to say, other than admitting that Minnie Eleanor Kirby had died at his hands. Meanwhile, poor Minnie had been buried in her home town of Boston.

“The funeral of Mrs. Minnie Eleanor Kirby, Louth, took place at Boston Cemetery on Friday afternoon last. The coffin was conveyed in motor hearse, there were one car and a motor-car for the mourners, who numbered six. The most pathetic figure was the deceased’s son, Mr. Harry Kirby, tall and fair haired, who appeared very distressed, particularly at the committal portion of the service. The remains were first of all taken into the little church, where a short service was conducted by the Rev. O. K. Wrigley, who also officiated at the graveside. The floral tributes were both numerous and beautiful. Included were the following: “Mother,” with fondest love from her boys, Harry, Ralph and Norman; To darling Minnie, from her sorrowing sister, Emilie; “Pax ; At rest ” darling sister Minnie with fondest love, from Edith; to dear Minnie from her sorrowing brother and sister, Charlie and Judy, Gillingham ; Auntie and Uncle; Phoebe: In affectionate remembrance from L. A. and M. Kirby ; with deepest sympathy from L. A. and A. C. Kirby; Kate; Mr. and Mrs. G. A. Brough and family; R. Watson; B. and W Took ; Miss Carter and Miss Teanby.

The events surrounding the killing of Minnie Kirby became clear following witness statements in front of Louth magistrates. On the morning of 11th of July, at 7.30 am, Mrs Kirby had taken delivery of some letters from the postman, and a little later, 8 year-old Norman had set off to school. At some point during the morning she had been sitting at the table writing a letter to her son Ralph, who had emigrated to Canada. Bertram Kirby had fetched an axe from the woodshed and struck one savage blow to the base of her neck, probably killing her instantly. Kirby had made some effort to clean up the blood around his wife’s head, but had made to attempt to move her body.

He then walked into Louth where he called at the home of Mrs Took, where his older son Harry was a lodger. He asked Mrs Took if young Norman could come for his dinner, as he himself had to go to Grimsby on business and his wife had travelled to London by a morning train. On the way to Mrs Took’s house, he had called in at The Brown Cow pub, at the junction of Church Street and Newmarket and asked the landlady, a Mrs White if he could leave a bag and a parcel with her. She testified that Kirby looked “pale and agitated in his manner”.

On several occasions during the 11th and 12th July, Kirby took various parcels of women’s clothing to a little second hand shop run by Mrs Ryley, at 8 Eastgate, and exchanged them for cash. On the evening of 11th July, Kirby went to the Wheatsheaf Inn and played dominoes for most of the evening. He then walked back to the bungalow and spent the night sleeping in the same house as the corpse of his wife. As we have already read, he was then arrested on the evening of 12th July.

When the case finally came to trial at Lincoln Assizes on 2nd November, it was a brief affair. Representing Kirby, Mr T.K. Fitzwalter Butler did his best to persuade the jury that Kirby was insane, reminding them that he had joined the army – The Leicestershire Regiment –  in 1914, but by early 1915 was in a mental facility at Netley Hospital, Hampshire, after attempting to commit suicide, and had subsequently been discharged as unfit for service. The Lincoln jury, however, were having none of it, and after retiring for just twenty five minutes to return a verdict of guilty. Mr Justice Swift (right) promptly donned the small square of silk known as The Black Cap and sentenced Kirby to death.

Kirby’s date with the hangman was originally scheduled for December, but a plea for a reprieve was lodged with the Home Secretary of the time, Sir William Joynson-Hicks, was not in a giving mood, and he dismissed the appeal. At 8.00 am on Wednesday 4th January, Kirby made the short walk from the condemned cell (apparently after eating the proverbial hearty breakfast) to the Lincoln Prison gallows, where Albert Pierrepoint tightened the noose under his ear and pulled the fatal lever.

This is a strange case, and a horrid one, as the killing took place yards away from where I spent many happy hours as a youngster. No-one ever established a plausible motive for the murder. Kirby was clearly in a dire mental state, but what did he hope to gain from his wife’s death? Between the killing and his arrest he claimed to have sold the bungalow, but there was no evidence of this. I have no idea what became of the bungalow – a fellow train-spotter, now old like me, remembers going to it as a dare to see if he could see the ghost. And what became of the boys? Ralph may have lived the rest of his life out in his adopted Canadian home, and there is a record of a Harry Kirby dying in Colchester in the 1960s, but of young Norman, not a trace. Minnie lies in Boston Cemetery, in a rather overgrown grave (below) which can be found with a bit of effort and help from the cemetery keeper.

And Bertram? His grave is probably marked by one of these modest little headstones in the prison burial ground with the walls of Lincoln Castle. 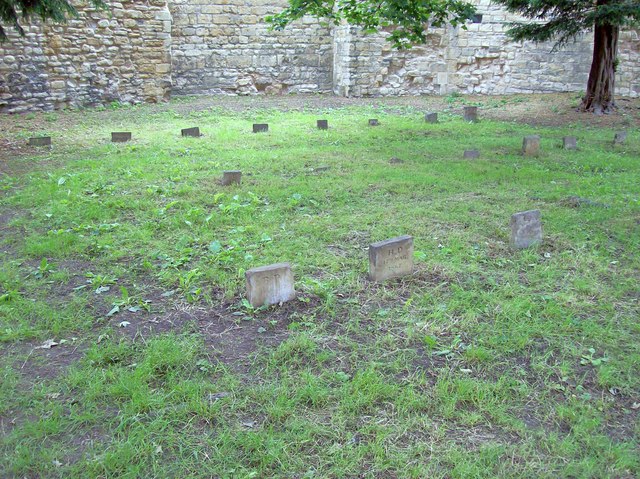