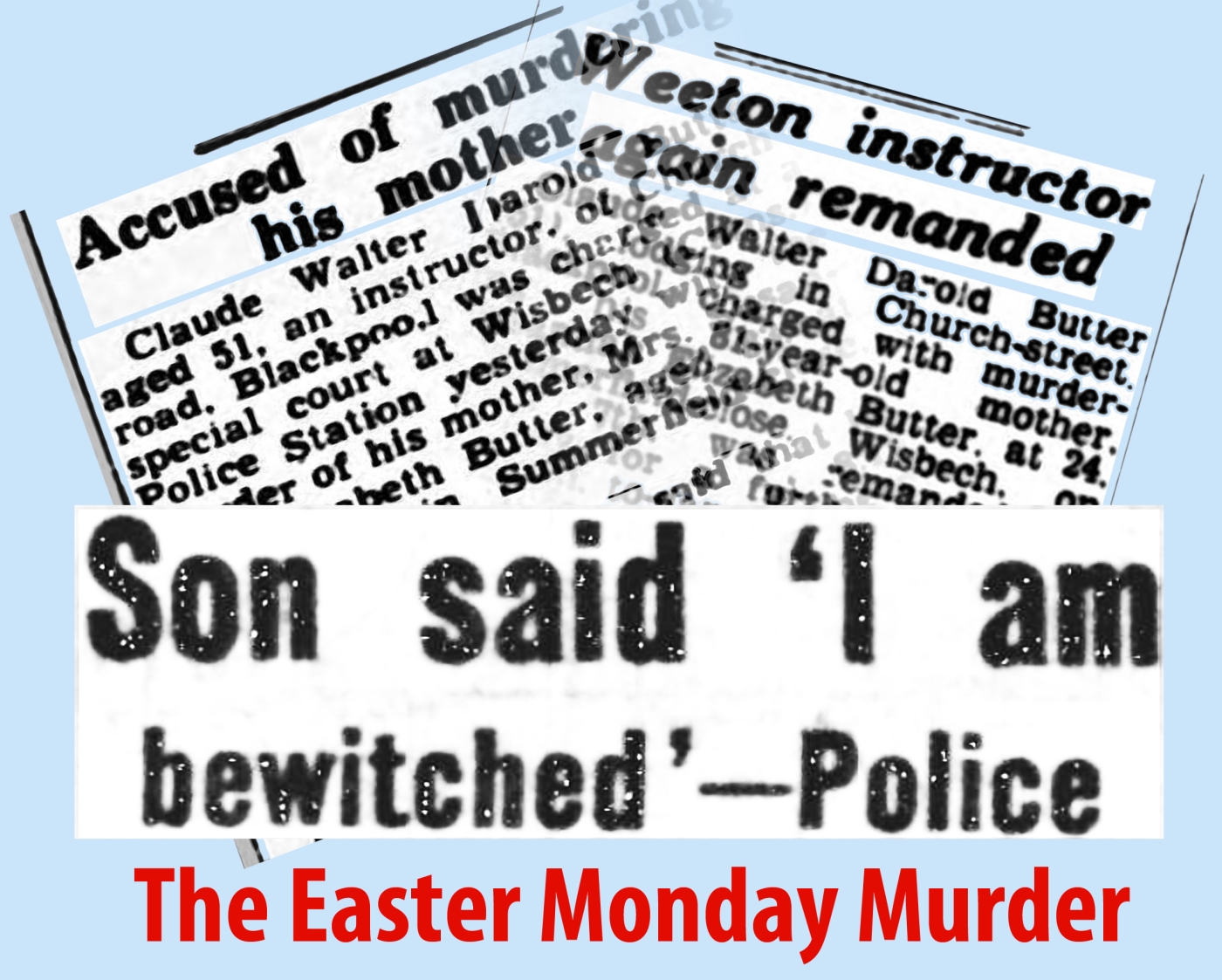 1953 had not begun auspiciously for East Anglia. Overnight on 31st January a fierce storm had brought devastating flooding to the coast from Lincolnshire to Norfolk. Amost exactly a year earlier, King George VI had died at Sandringham, and the preparations for the June coronation of the young Queen Elizabeth were well advanced. Wisbech Town were struggling in the Midland League, but did manage to beat Gainsborough 5-3 on Easter Saturday, 4th April.

On Thursday 2nd April, Claude Butter arrived at his mother’s house in Wisbech, having traveled down from his lodgings in Church Street, Blackpool. The 51 year-old was a civilian instructor at RAF Weeton, in Lancashire. He had been away from home since he was 16. When his father died he was abroad but in a later statement he said:

“I tried to get home, but I understand that the then Superintendent of police said my presence was not necessary. That sort of gave me the impression that I was not really wanted.”

81 year-old Susannah Elizabeth Butter lived on Summerfield Close, in a modest 1930s council house in a set of terraces built around a circular green. Her other son, Charles, lived either in Milner Road, Wisbech, or with his mother – newspaper reports differ.

That Sunday, 5th April, was Easter Day. On Easter Monday, Mrs Butter and her sons sat down to supper. It was to be her last meal. At 7.45am the next day, Mrs Butter’s next door neighbour was roused by a frantic knocking on the door. When he answered the door, he saw a dishevelled Claude Butter, who said:

“Fetch the police. I have killed my mother. I am mad.”

Mr Jackson and his wife went into number 74, and found Mrs Butter slumped at the foot of the stairs, her head a bloody mess. Claude, meanwhile sat slumped at the kitchen table, muttering:

“To think I should have done this.”

Several times he also said,
“I sent her to heaven. God rest her soul.”

When the doctor arrived, Mrs Butter was pronounced dead. The police had found a poker near to her body, and subsequent tests revealed that it was stained with the old lady’s blood.

When Butter appeared in Wisbech Magistrate’s Court on 22nd April, the national press were preoccupied with the misdeeds of a certain John Christie, who had been arrested on 31st March. While the full horror of what Christie had done would only emerge over the next weeks and months, Butter’s crime was relatively cut and dried, the only question being “why?”.

Being a trial for murder, business was transferred to Cambridge Assizes, and on Tuesday 20th May, Claude Butter was found guilty of his mother’s murder, but declared insane, and sentenced to be detained “until The Queen’s pleasure be known.”

“The accused man, my brother, was a bachelor whose life had been centred round our mother. The relationship between them was of the highest and there was genuine affection on both sides.”
(Pettefar) “Would you agree he would not have killed her had he not had a brainstorm of some kind?”
“Yes.”

“What he did that morning was to kill the nearest and dearest person to him on this earth?”
“Yes.”

There was little for the police to do except take Butter to a secure place and try to fathom out what had possessed him to kill his mother.

It was disclosed in court that Claude Butter had made the following statement to police:

“I was not the fellow she thought I was or who anyone thought I was. I didn’t want her to know. I do things on mad impulse. All my life I have been bewitched by the devil.”

Summing up the case for the prosecution, Mr Jardine reminded the jury:

The inner torment which drove Claude Butter to kill his mother can only be guessed at. His death was registered in the St Pancras district of London in the summer of 1960, which suggests he spent the final years of his troubled life in one of the capital’s longest established mental health institutions, St Pancras Hospital.