THE MURDER OF LUCY LINGARD . . . A Grimsby tragedy (part one)

Lucy Margaret Mullins was born in the village of Worlaby in 1869. Her father James was Irish, and worked as a groom. Her mother Jane was from the Lincolnshire village of Great Limber. In the 1881 census the family had moved to Little Limber Grange, near Brocklesby. In April 1889, Lucy married John Lingard in St James Church, Grimsby, and the census two years later shows that they were living at 6 Vesey’s Buildings in Grimsby, and they already had two children, Rose (2) and William (10 months). By 1901 they had moved to Sixth Terrace, Hope Street, and had two more children, Nellie (8) and Arthur (4). Also living in the house were two of Lucy’s adult relatives.

The 1901 census was taken on 1st April, and by the autumn of the next year John and Lucy Lingard had separated, Lucy remaining in Hope Street with the children. By the autumn of 1902 she had given birth to another child, born earlier in the year. The census also tells us that a fisherman named Samuel Henry Smith was also living in Hope Street, apparently on his own. His background has been difficult to track. The census records that he was born in Norfolk, but later newspaper reports suggest that his home town was Brixham in Devon.

It is not clear if Harry Smith was in any way responsible for the break up of the Lingards’ marriage, but by November 1902 it was clear that Lucy Lingard and Harry Smith (also separated from his spouse) were in a relationship, when he was not out on the North Sea on a trawler.

At this point, it is worth pausing the story to compare how people lived – in terms of house occupancy – back in the day. It was very common for ordinary working people to share houses with others. I was born in 1947, and my parents rented a room in a Victorian terraced house, which was shared with another couple and the owner, a single man. Each had a bedroom to themselves, and the kitchen and scullery were shared. There was no bathroom. There was running water, but also a pump in the scullery which drew water from a well. There was no electricity until, I think, 1951 and lighting was from gas lamps which were lit by pulling a little chain, which struck a flint, rather like the mechanics of a cigarette lighter. 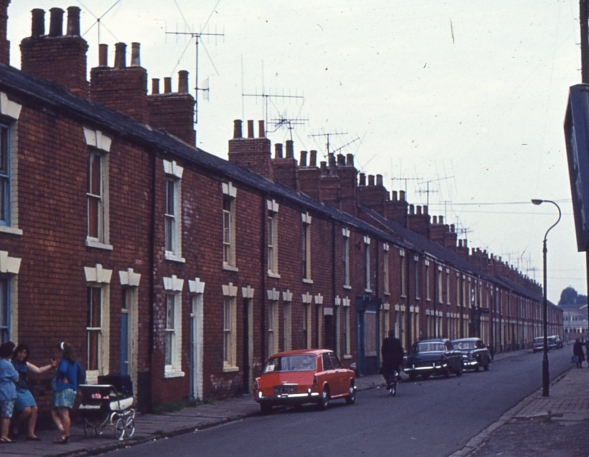 Hope Street in Grimsby was cleared of its terraces in the late 1960s (pictured above, thanks to Hope Street History), but a late 19th century map shows back-to-back houses opening directly onto the street, and every so often there would courtyards, each open area being surrounded on three sides by further dwellings. For those interested in the history of Hope Street, there is a Facebook page that gives access to an excellent pdf document describing the history of the street. That link is here. It is also worth pointing out that house ownership, certainly in 1902, would have been in the hands of landlords. The great majority of people in streets like Hope Street would be tenants.

We must now move on to the events of 18th November 1902. Harry Smith’s trawler docked that morning, and he had spent the best part of the afternoon and early evening in the company of Lucy Lingard. Smith at one point went down to the docks to collect his wages from his latest voyage. He and Lucy Lingard were at each other’s throats, perhaps because she had refused him ‘conjugal rights’, and he had struck her several times, giving her two black eyes. In spite of this, they went out drinking again, but what happened when they returned to Hope Street later that evening was to send a shiver of revulsion through the whole area.

IN PART TWO
A daughter’s testimony
Denial, trial – and the black cap