I’ll be quite upfront. I am in my seventies and most people consider me a reactionary. I rant on with the best (or worst) of them about the decline in modern morality and the collapse of traditional family values, but as I research these old murder cases, it becomes increasingly apparent that the ‘good old days’ of sound and stable families may be something of a false recollection. This case involves a terrible murder in the village of Harbury in September 1922. The victim was a 24 year-old woman called Rosilla Patience Borton.

Rosilla was born in 1898, and she first appears on public records in the census of 1901. She is living in Cross Green, Bishop’s Itchington  a member of a large household headed by William Freeman, and his wife Rachel. Seven of the ten children have the Freeman surname, while Alice Violet (9) Arthur Henry (7) and Rosilla share the surname Constable. Rosilla is described as ‘daughter of the wife’. William Freeman, like many other men in the village was a stone quarryman. So, already, there is something of a puzzle. It seems that Rachel Freeman had a dalliance with someone called Christopher Constable, long enough to produce three children. Constable, incidentally, died in 1898 at the age of 35. Whatever the truth, we mustn’t ponder too long, because there are more mysteries ahead.

In the summer of 1915, Rosilla married Edward James Borton. He and his family are listed in the 1911 census as living in Binswood End, Harbury (above) He was 18 years senior to Rosilla, and died at the age of 36 in April 1917. Rosilla may have mourned his passing, but she was young, and had cause to hope that her best years were yet to come. In January 1918, Rosilla married William Rider, again a much older man. He was a chimney sweep and window cleaner who lived in Rugby. He was, to put it mildly, a ‘wrong ‘un’. It transpired that he had never divorced his first wife, who was still alive. The home, in Pennington Street, Rugby (below),  which Rosilla joined, already had two young women in residence. One was Rider’s daughter by his legal wife, and two were the fruits of Rider’s relationship with yet another woman.

It was not a happy house, at least for Rosilla, as Rider had started knocking her about. To make matters even worse, Rider seems to have tired rather quickly of his new ‘wife’ and instead began making advances to Rosilla’s half-sister Harriet. Harriet was born in 1906, so she was only just ‘of age’ by the time Rosilla was killed, and it seems she had fallen under Rider’s spell some time before this.

Rosilla had, on several occasions fled the house in Rugby to seek refuge with her mother who, by this time was living in Binswood End, Harbury. Was this the same house previously occupied by the Borton family? I can’t answer that question, sadly.

The Gloucester Echo of 11th September 1922 carried this chilling story:

A murder
Trial and conviction
A job for Mr John Ellis 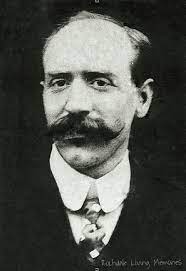