THE WHITE HORSE MURDER . . . A brutal killing in a Lincolnshire market town (2) 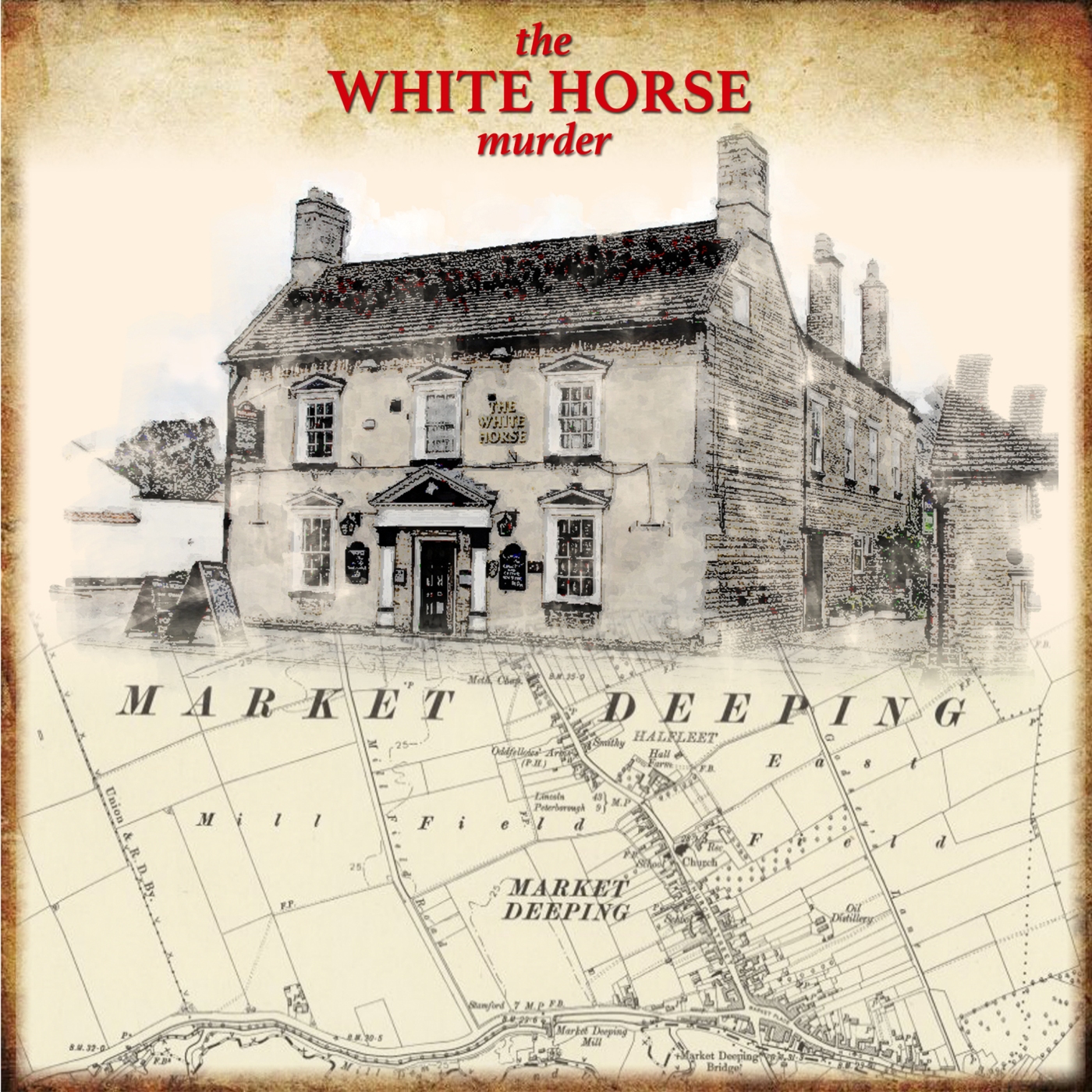 SO FAR – Market Deeping, Lincolnshire. September 1922. On Wednesday 20th, 18 year-old Ivy Dora D’Arcy had married her sweetheart, George Prentice. On the following Monday, her widowed mother Edith – landlady of The White Horse – was to remarry. At around 9.00pm on Saturday 23rd, Edith, Ivy, her sister Gertrude, and Edith’s soon-to-be daughter in law Eva are examining wedding presents in a back parlour, lit only by a candle. As ever, what happened next is vividly described by a local newspaper:

At the coroner’s inquest on Monday 25th September, Edith D’Arcy explained that she was now Mrs Kitchener. Her new husband’s rather hard-hearted employers The Great Northern Railway Company, had refused to extend his leave of absence despite the tragedy, and so they had been married just an hour or so before arriving at the inquest. They are pictured below. 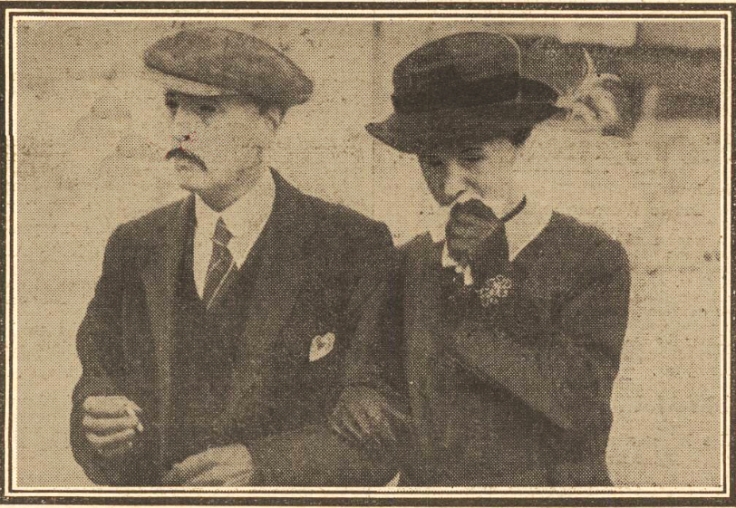 Barely managing to keep her composure, she told the court that in the darkness, no-one realised what had actually happened. She said:

“Gertrude cried, “Bring a light, Ivy has been shot. I got some matches and lit the gas, and I saw them lifting Ivy onto a chair. She was smothered in blood, and a big clot of blood as big as my hand lay on her lap.”

What she saw was described in more chillingly anatomical terms by the doctor who was called to the scene:

“Dr. Benson stated that he was called to The White Horse Hotel soon after 9.20, on Saturday evening. Deceased was dead on his arrival. Her clothing was saturated with blood, and there was a 2½ inches by 3 inches wound on the left breast, whilst several ribs were smashed. A large cavity was formed In the thorax. The full charge from the gun had entered her chest at close range, from close range. Death was instantaneous, and due to haemorrage and shock. The wound was consistent with having been caused by the charge of a sporting gun such as that produced.”

It is almost impossible to imagine the devastating effect this murder would have had on George Prentice. For three days he had a lovely young wife with the promise of children and years of happiness. Because of an instant of jealous rage, those dreams lay in tatters. He is pictured below, the man on the right, supported by a friend, arriving at the inquest. 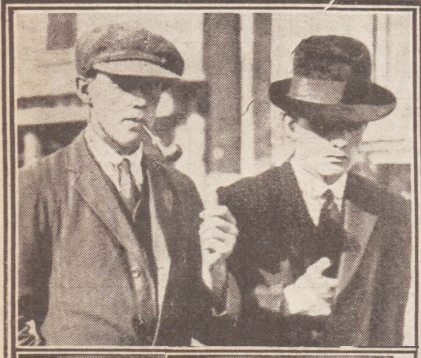 Worse was to come for George Prentice. He had to watch as his young wife was lowered into the ground on Wednesday 27th September while the solemn words of the burial sentences were intoned.

I am the resurrection and the life, saith the Lord : he that believeth in me, though he were dead, yet Shall He live: and whosoever liveth and believeth in me shall never die.
I know that my Redeemer liveth, and that he shalt stand at the latter day upon the earth.
And though after my skin worms destroy this body, yet in my flesh shall I see God:
Whom I shall see for myself, and mine eyes shall behold, and not another.

It is hardly surprising that the occasion was too much for George Prentice to bear. 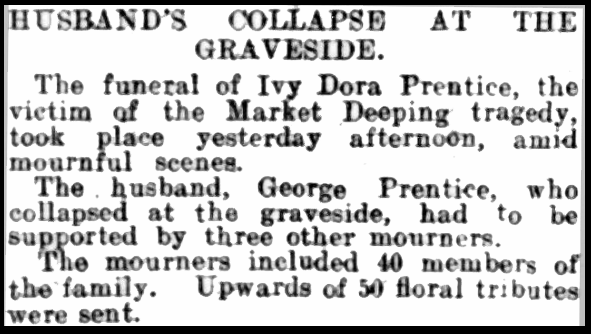 Ivy’s grave is very weathered, but can still be found in Market Deeping cemetery. 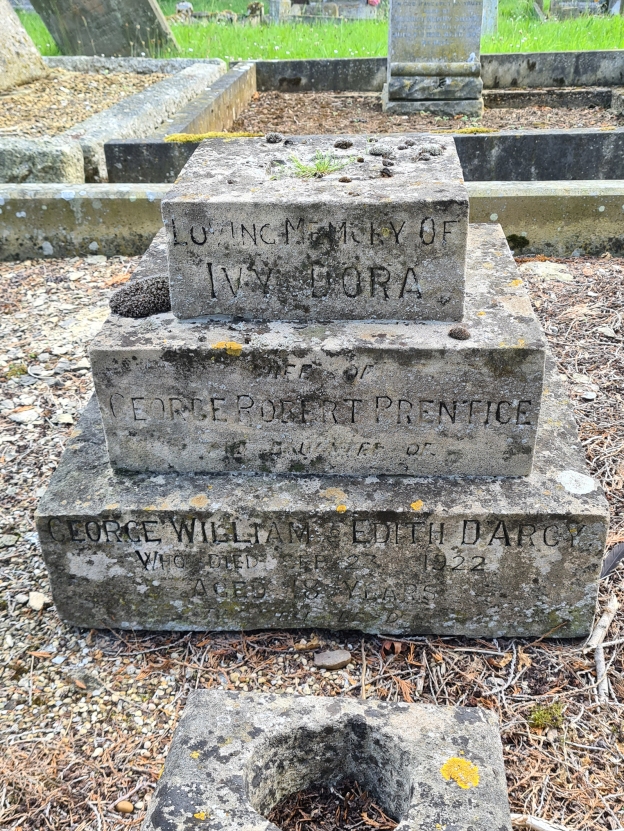 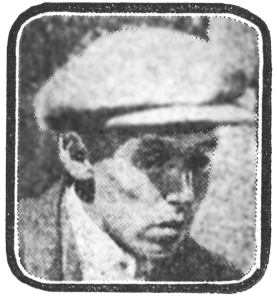 As for Fowler, (pictured left, leaving the inquest) he was clearly as guilty as sin. In his mind he had painted a picture in which he and Ivy D’Arcy were destined to be man and wife, despite the lack of any encouragement on her part. He was sent for trial at the autumn assizes in Lincoln, and it wasn’t until the jury found him guilty of murder, and the death sentence had been imposed by Mr Justice Lush  that his defence team  decided to ask for a  a repeal on the grounds of insanity. This was rejected, and Fowler was booked in for an appointment with the formidable Thomas Pierrepoint, (right). 13th December 1922 was a bad day for Lincolnshire, as the double execution despatched two men of the county, Fowler and a man called George Robinson who had murdered another 18 year-old girl in Dorrington. 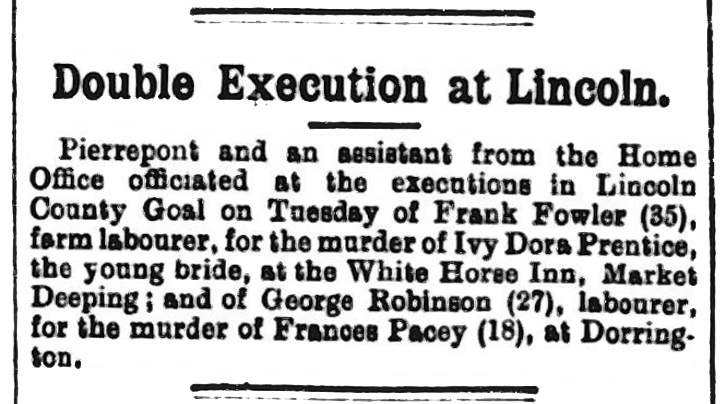 As for Fowler’s motivation, one has to accept Edith Kitchener’s statement that there was never anything between Fowler and her late daughter. Whatever relationship there was must have existed purely in his own head. At the time of the shooting he was heard to say, “Now I’ve had my revenge.” He had determined that if he couldn’t have Ivy Dora D’Arcy, then no-one would.

These stories would wander interminably if we followed the future lives of the surviving participants, but thanks to Chris Berry, whose family tree Ivy D’Arcy is part of, I can add that George Prentice married again in 1927, to a woman called Florence Taylor. He died in October 1960, leaving the tidy sum of £20315 which is close on £330000 in today’s money. Edith and William Kitchener were recorded as living in Tallington in the 1939 register. She died in the spring of 1945, aged 75, while William died in the spring of 1951.