Asked to name  counties associated with England’s coal mining heritage, many people would say, “Yorkshire and Nottinghamshire.” The more knowledgeable might add Lancashire and, perhaps, Kent, but few would be aware that until relatively recently there was an important mining industry in North Warwickshire. One of the most significant centres was the village of Baddesley Ensor (below), near Atherstone. Mentioned as ‘Bedeslei’ in the Domesday Book, the village has a long and fascinating history, but the events of a day in late August 1902 are the focus here. 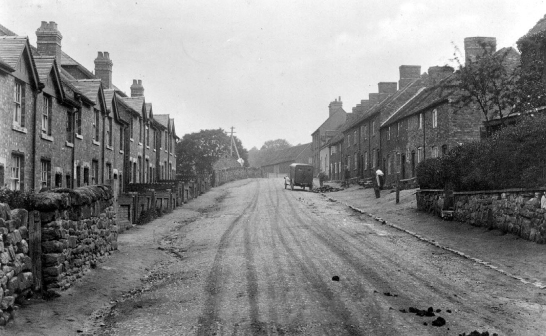 The 1901 census tells us that the Chetwynd family, comprising John (56), wife Eliza (60), Joseph (22) and Eliza (19) lived at 177 Watling Street Road, in what was known as Black Swan Yard. Not far away, on the same road, a young man called George Place, described as a coal hewer, lodged with William Aston and his wife Martha. At some point later that year George Place and the younger Eliza became, as they say, “an item” – to the extent that Eliza became pregnant. On 14th August 1902, Eliza gave birth to a baby boy. Much had happened prior to this. On 19th March John Chetwynd died leaving the two Elizas and the his as-yet-unborn grandson to manage on the income of young Eliza’s brother Joseph Chetwynd who, inevitably, was another coal miner. It seems that George Place had moved in with the family, and had become informally engaged to Eliza, but his contribution to the the family finances must have been minimal, as Eliza had served him with what was known as an Affiliation Summons – a kind of paternity order, what we know as a Child Support maintenance enforcement.

George Place was not a Warwickshire man. He was born in 1874 in Radford, an outer suburb of Nottingham. His was a large family, even by the standards of the day. He was the elder of nine children. In 1891, at the age of 17, he was listed as living at 72 Saville Street, Radford, working as a cotton spinner. Whether he became a miner by choice or through necessity, we will never know, but fate brought him further south into the Warwickshire coalfield.

Having researched and written about many of these historical murder cases, the question of evil versus insanity comes up every time. The central question is simple: Would someone committing a murder in plain sight have to be unhinged to think they could get away with it? Another question: Can insanity be temporary, so that when a murderer is apprehended, he/she may seem perfectly sane? These days, of course, the distinction is largely irrelevant, as no murderer will lose their life as a result of a guilty verdict; the only variable is the kind of institution in which they will serve their sentence. What follows in this story will explain why I have raised the philosophical question.

As is often the case, there is a back story here, and the Nuneaton Observer (left) made much of the troubled relationship between George Place and the Chetwynd family.

Quite why George Place felt so aggrieved at being asked to contribute to the upbringing of the little boy he had fathered we shall never know. When the summons making him responsible for his eleven day old son was served on Place, he threatened that all the Chetwynds would get out of him would be a bullet. This sounds like empty rhetoric, uttered for dramatic effect, but what followed was truly horrific

Three bullets. Three lives
A date with the hangman