CRIME ACROSS ENGLAND. . . 6: Worcester and Bath 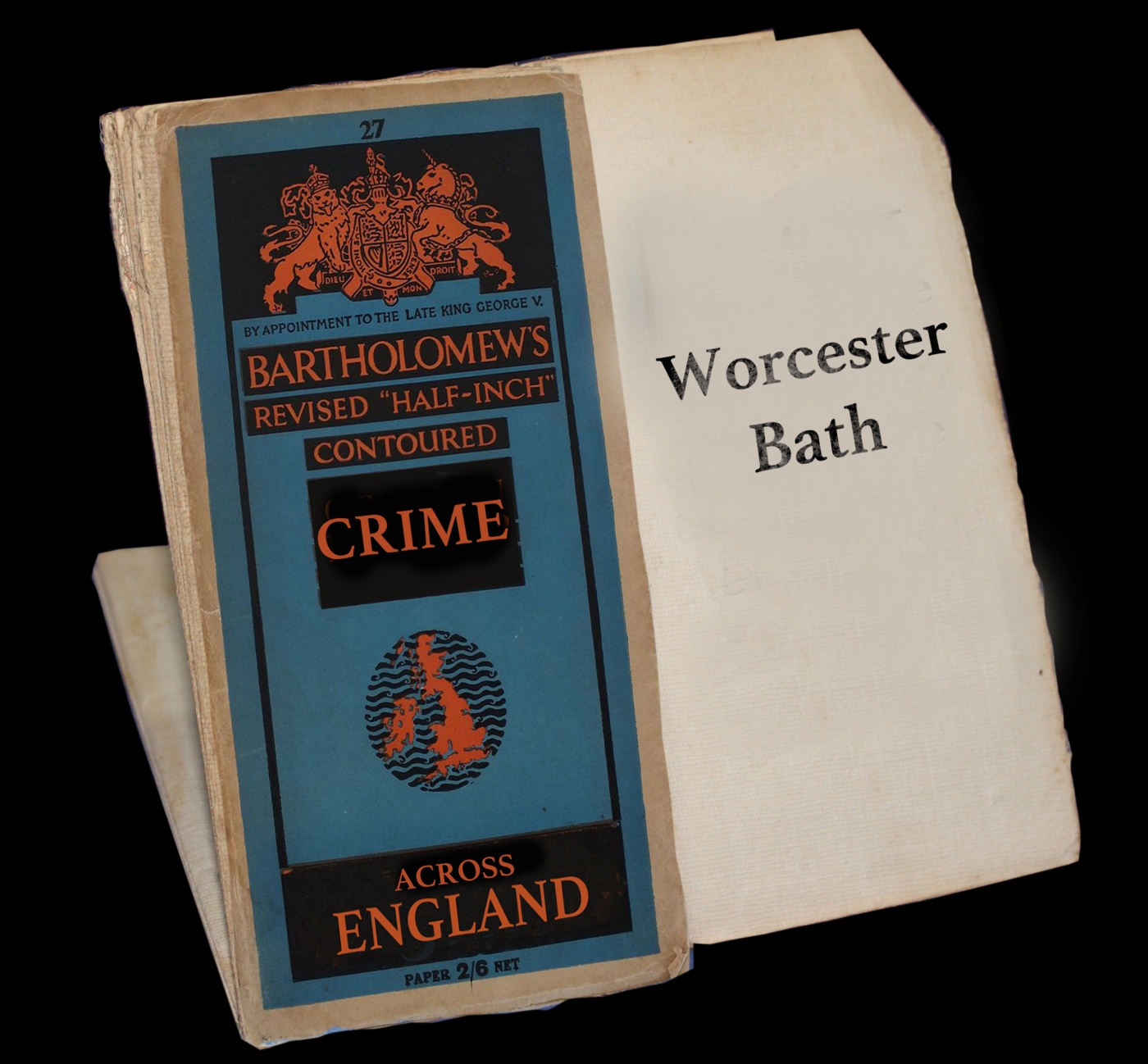 Just 50 miles or so from the town of Shrewsbury is Worcester and it is here, more or less inhabiting the same time frame as Cadfael, we find Under-Sheriff Hugh Bradecote and his rough-hewn assistant, Serjeant Catchpoll. Worcester, at that time, was a busy market town, and it would be many years before the Benedictine Priory would be transformed into what is now Worcester cathedral. 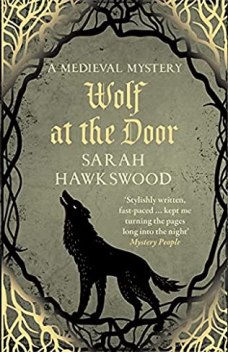 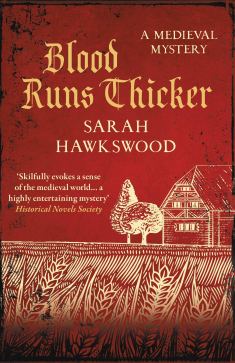 Author Sarah Hawkswood is a serious academic historian, and she has set the series against the political and military turmoil that prevailed during the reign of King Stephen, and his war with the Empress Matilda. Such was the insularity of even relatively large towns like Worcester, however, that national events can take weeks and months to impinge on the lives of townsfolk and villagers. Hawkswood paints a picture of a time that was a brutal struggle for the majority of the population. Disease, hunger, violence and intemperate weather were constant threats, but in these novels we come to appreciate the rhythm of the seasons and the wildness of the landscape beyond the scattered villages and hamlets.

Best of all, though, is the fact that these are great crime novels, with tantalising plots and storylines in the great tradition of detectives and detecting. Sarah Hawkswood’s website is here, and you can also read detailed reviews by clicking on the cover images in this feature. 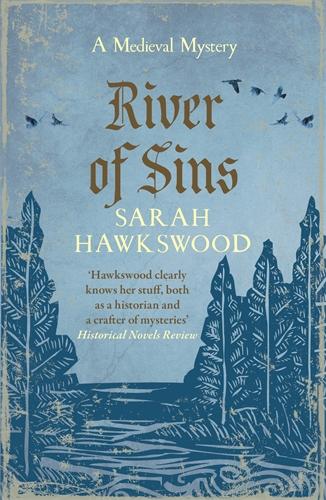 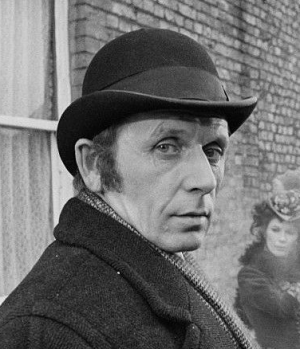 To Bath now, and a character created by (I think) Britain’s longest living (and still writing good books) crime author. Peter Lovesey was born in Middlesex in September 1936 and, after National Service and a career in teaching, he published his first novel in 1970. Wobble To Death was the first of a hugely successful series of historical novels featuring Sergeant Daniel Cribb and his assistant Constable Thackeray. Older readers will remember the superb BBC TV adaptations starring Alan Dobie (left) as Cribb. The stories were also dramatised by BBC radio. 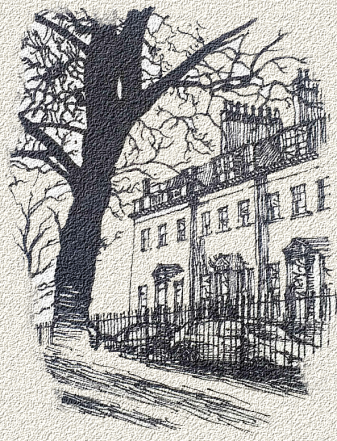 But Cribb was very much rooted in London, and we must look at a more modern detective, plying his trade in the ancient town of Bath, with its Roman baths and glorious Georgian heritage. We first met Peter Diamond in 1991, in The Last Detective. The title refers to Diamond’s outright reluctance to adopt modern technology, as he sees gadgets and gizmos as the enemy of good old fashioned police work. Lovesey describes his man:

“Difficult to tell whether Detective Superintendent Peter Diamond, on duty in the gardens, was overt or covert. If he had been in the race, you might have taken him for one of the jokers in fancy dress. He might have stepped out of a nineteen-forties film, a sleuth on the trail of Sydney Greenstreet. The gabardine trench coat and dark brown trilby, his so-called plain clothes, weren’t plain at all in twenty-first century Bath.”

In The Last Detective,  the naked body of a woman is found floating in the weeds in a lake near Bath with no one willing to identify her, and neither marks nor murder weapon. Diamond’s reliance on tried and trusted methods  are tested to the limit. Struggling with a jigsaw puzzle of truant choirboys, teddy bears, a black Mercedes and Jane Austen memorabilia, Diamond doggedly stays on the trail of the killer even after this bosses have decided there’s enough evidence to make a conviction.If you click the image below you can read my review of the 2020 novel, The Finisher. 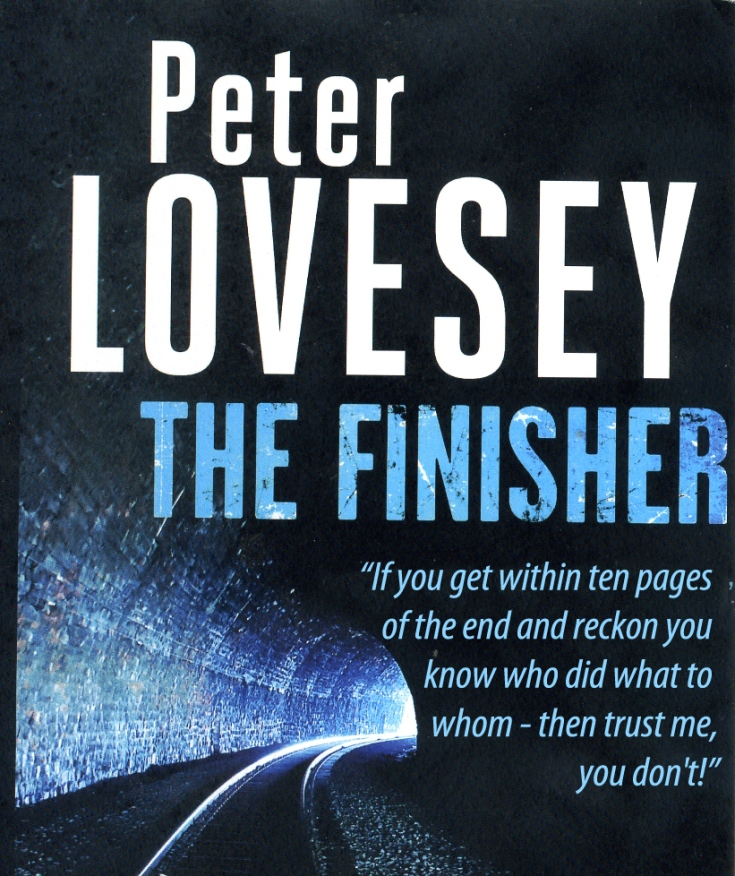 WOLF AT THE DOOR . . . Between the covers 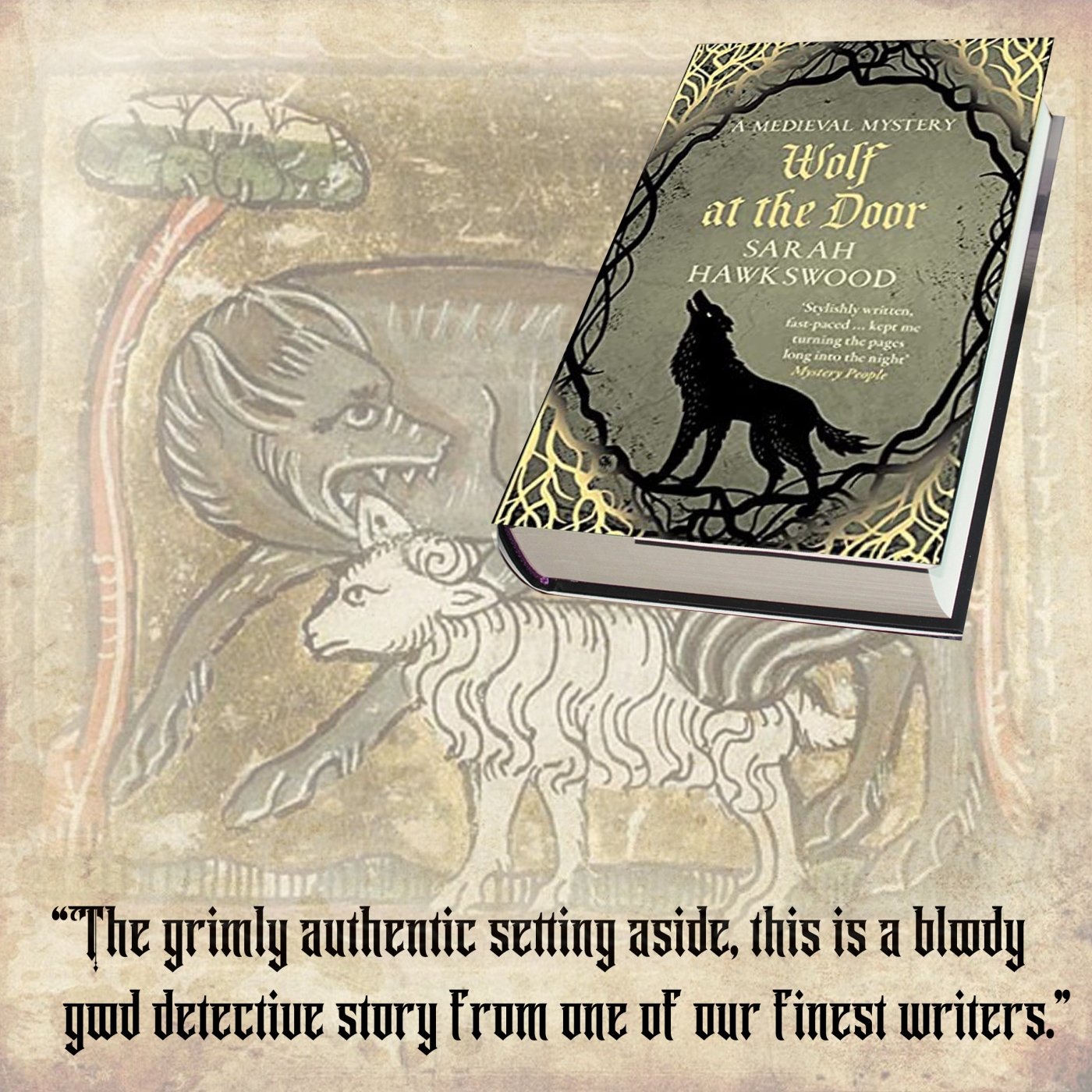 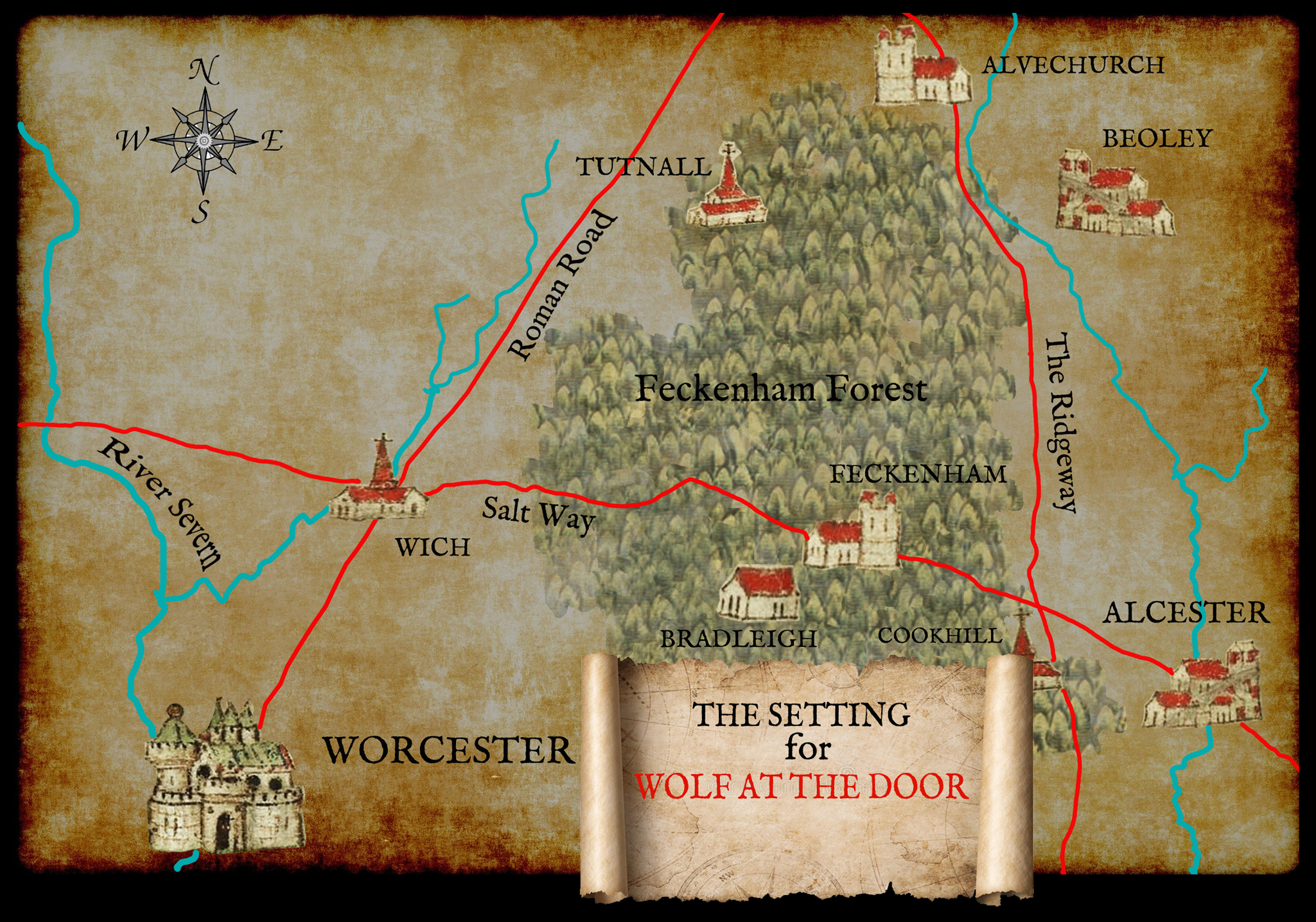 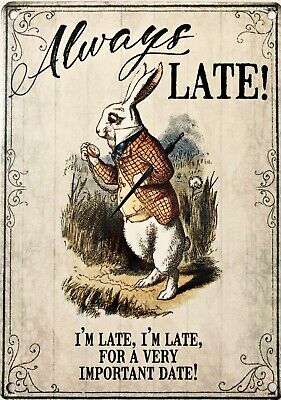 Rather like Charles Lutwidge Dodgson’s White Rabbit, I am always late. Late, that is, to many excellent crime fiction series that have been on the go for some years. I often come to them a few books in and, having enjoyed what I have read, try to solve the dilemma, which is this. Do I abandon everything else on the TBR pile to read the earlier books, or do I shrug my shoulders and convince myself that the books will always be there, and that I will get round to them “at some point”? Don’t get me wrong, I’m not complaining about being a book reviewer. Publishers send me free books on the understanding that I will read them and that my reviews will help to sell the novels. That’s all good, but one gets locked in to a reading timetable that can be very unforgiving, particularly when blog tours are involved. Reading for pure pleasure and relaxation has to take a back seat, I’m afraid.

That long digression is a background to this review of the latest Bradecote and Catchpoll novel by Sarah Hawkswood. I read – and loved – two of the series, River of Sins and Blood Runs Thicker, and you can read my reviews by clicking the links. Now, the ninth in the series, Wolf At The Door, is with us, and it is every bit as good as the other two have read..

For people who are even later arrivals to the party than I, we are in 12th century Worcestershire. Hugh Bradecote is the Under Sheriff of the county, and is of noble birth with a degree of hauteur, while Sergeant Catchpoll is Worcester through-and-through, rough and ready, but very street-wise. Walkelin – the apprentice – is something of a ‘gofer’, but is bright, perceptive, and not afraid to speak his mind. This story begins with the discovery of a man who has met a violent death. His face has been removed and his throat has been ripped out. Extensive damage to his limbs suggests an assault by a violent animal. A wolf, perhaps? But even in the Royal hunting Forest of Feckenham1, wolves have not been seen for many a year.

Hugh Bradecote is on what we could call paternity leave. He is particularly anxious about his heavily pregnant second wife, as his first wife died in childbirth. With some villagers of Feckenham convinced that Durand Wuduweard 2 was savaged by a wolf, and the more credulous of them even believing that the killing was the work of a werewolf, Bradecote has to return to duty.

We are some half way into the book before the officers have any concept of who – and what – is responsible for the death of Durand. More corpses and a savage attack on a landowner prompt an even greater sense of urgency to the quest, but then Bradecote, Catchpoll, Walkelin and their boss De Beachamp finally realise that the motive for the crimes is one of the oldest and deadliest – revenge, bitterly fermented and long standing.

One of the qualities of a natural and gifted storyteller is the ability to provide atmosphere. Sarah Hawkswood recreates a cold and grey Worcestershire at the onset of November. Many of the poorer folk will struggle to survive the next four months and will succumb to cold, hunger, disease – or a mixture of all three. The wolves may have mostly disappeared, but the forest is a dark and unforgiving place for the people who have hacked out space within it for their precarious lives. The grimly authentic setting aside, this is a bloody good detective story from one of our finest writers. Wolf at the Door is published by Allison & Busby and is out on 19th August.

Blood Runs Thicker . . . Between the covers 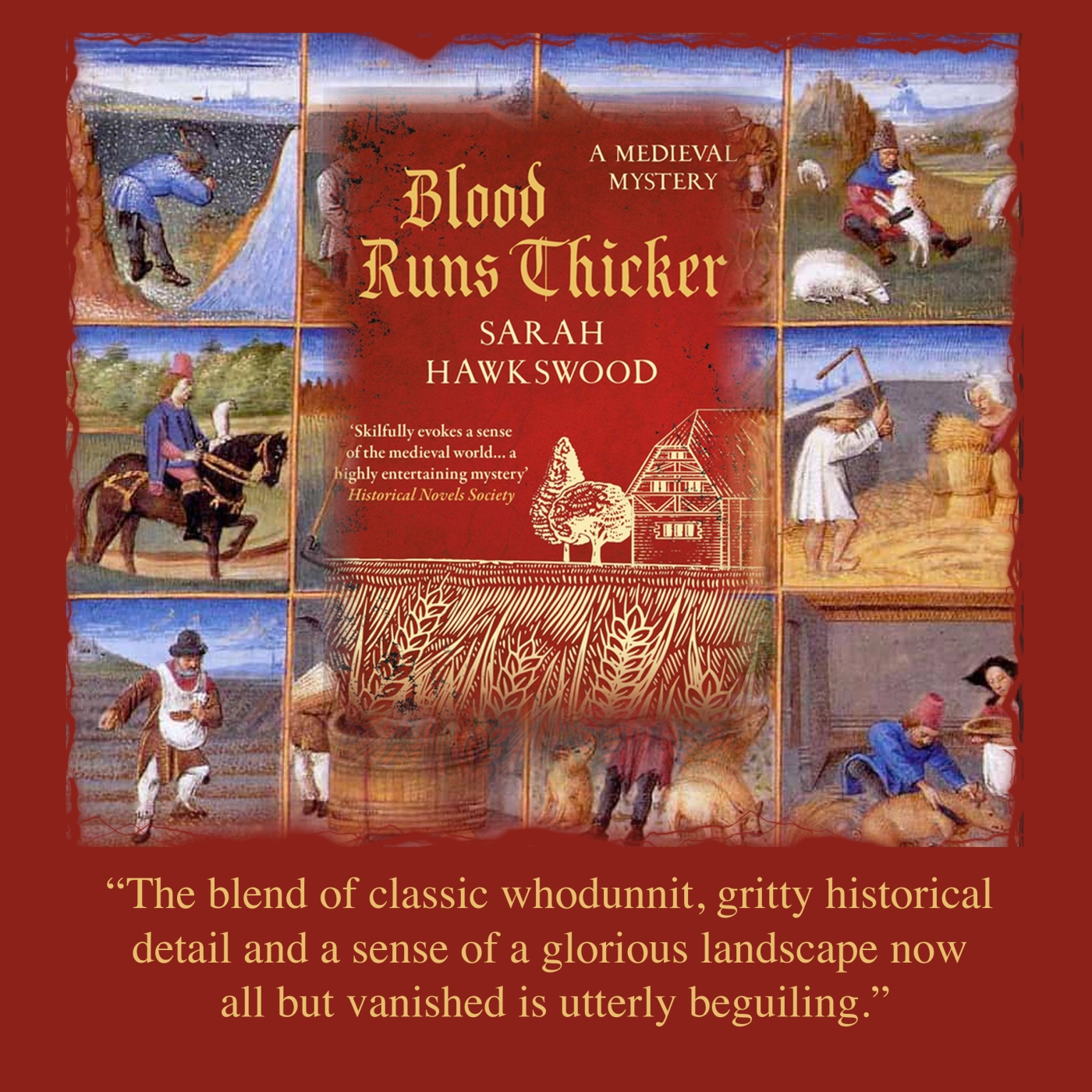 This is the eighth book in a very popular series set in 12th century Worcestershire. I am a latecomer to the party, but I thoroughly enjoyed the previous book River of Sins, and you can read my review by clicking this link. Now, Under-Sheriff Hugh Bradecote and his grizzled ally Serjeant Catchpoll – along with apprentice lad Walkelin – investigate the murder of an irascible and little-loved nobleman, Osbern de Lench.

The late man had a habit of sitting on his horse atop a small hill near his house and gazing at his land. It was said that doing so calmed him down when he was in one of his more wrathful moods. On the fateful day the horse comes back alone and a search party finds de Lench stabbed to death. His family was certainly not a happy one. Baldwin, his son by his first wife (who died in a mysterious riding accident) has the same choleric temper as his father. There is a second son – the result of de Lench marrying again, but Hamo is very different from his half brother. He is studious and solitary and probably has what we now call Asperger’s Syndrome.

Incidentally, there are three real-life villages near Worcester which rejoice under the names Church Lench, Ab Lench and Rous Lench, but I believe Osbern de Lench exists only in Sarah Hawkwood’s vivid and blessed imagination. Back to the novel, and Bradecote & Catchpoll learn that de Lench had ‘history’ with other local landowners, but was this enough to link any of them to his death? And was Fulk, the family Steward providing home comforts to Lady de Lench, a woman not unused to being roughly dealt with by her husband? The seemingly pointless murder of Mother Winflaed, a harmless woman who ministers to the villagers with her herbal knowledge – and also delivers its babies – only adds to the confusion.

The ingredients that make up the chemistry between the three investigators is cleverly worked. Young Walkelin is callow, but clever and inquisitive, while Catchpoll’s world-wearness is an excellent counter balance to Bradecote’s more lofty idealism.

By no means is this a preachy or political novel, but Sarah Hawkswood has some pertinent points to make – via Hugh Bradecote – about the treatment and role of women, and the very real perils of childbirth. As a man of advanced years I can find much to moan about in current society, but modern obstetrics (at least in the western world) is something for which we should all be eternally grateful.

I am very much an amateur book reviewer, and there are probably hundreds of us who love to read, and are grateful for publishers and publicists who trust us to deal fairly with the books they send us. One of the downsides is that there is always a To Be Read pile, with deadlines to meet, and little chance to sit back and read purely for pleasure. I am determined, however, to find time to catch up with the previous books in this series. If they are all as good as this one, then my time will not be wasted

This novel is thoroughly immersive and the blend of classic whodunnit, gritty historical detail and the sense of a glorious landscape now all but vanished is utterly beguiling. Blood Runs Thicker is published by Allison & Busby, and is available now.