BAD TIMING . . . Between the covers

Nick Oldham (left) is a former copper from Lancashire,and his novels featuring Henry Christie have been delighting readers for many years. I believe that Bad Timing is the 27th in a series dating back to A Time For Justice, which came out in 1996.

Here’s a very quick Henry Christie CV ( or resumé for American readers). He worked his way up through the ranks of Lancashire Police, but never wanted the kind of seniority that meant braid on his ceremonial uniform or role where he spent most of his time behind a desk massaging crime figures for the Home Office or, even worse, managing the force’s diversity targets. He has been shot, beaten up, sacked and re-instated, and has seen the very worst of criminal lowlife in England’s north-west. He has now retired and is running a moorland pub, while still mourning the deaths and various departures of women in his life. 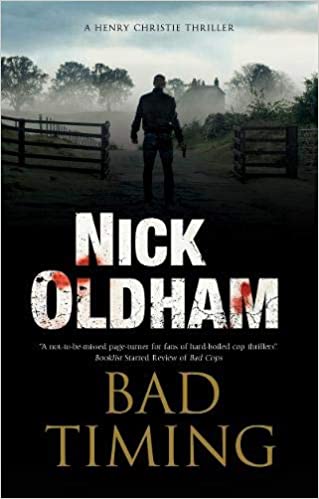 Bad Timing is a kind of sequel, or perhaps the final chapter of a story which began in the previous novel, Wildfire. If you click the link you can get the background story. In short, a married couple who made a tidy living out of creative accounting – laundering money for some seriously bad gangsters have been murdered in their luxurious converted farmhouse. The problem is that huge sums of money have gone missing, probably sucked into a Bermuda Triangle of dodgy companies, offshore investments and Swiss bank accounts. And now, the bad guys want the money back.

A word to the wise. Don’t be misled into thinking that the partly rural setting of these novels mean that it you will be reading a cosy Heartbeat-style tale of lovable rogues and amiable coppers on push-bikes. Oldham tells it how it actually is, and Christie’s world is one of ruthless criminal families, vicious thugs, appalling council estates with endemic crime, and toxic traveller sites populated with opportunists who are as violent as they are anti-social.

When the body of the daughter of the murdered accountants is found in a remote lake, the police realise that the case is far from closed and there is still a killer out there. Henry Christie is brought back as a consultant, and although he is ‘chaperoned’ by Detective Diane Daniels, it is his nose for danger that pitches them into a head-on collision with a gangland killer who is as black of heart as anyone Christie has encountered in his long career.

Christie is, to put it mildly, getting on a bit. His body is just about up for the demands of pulling pints, concocting exotic designer coffees and serving full English breakfasts at his pub, The Tawny Owl, but now he is out there challenging a man half his age and twice as malevolent.

Bad Timing is as brutal and unflinching a thriller as you will read all year. It is published by Severn House and is out on 30th September.