THE HANGING PSALM . . . Between the covers

Honest broker that I am, and the modern equivalent of Robespierre in my sea-green incorruptibility, I must declare an interest here. I am an unashamed and avid fan of anything written by Chris Nickson. I hope that if he did write a duff book – or chapter – or page – or sentence – I would say so. Happily, that dilemma is one that I have yet to face. 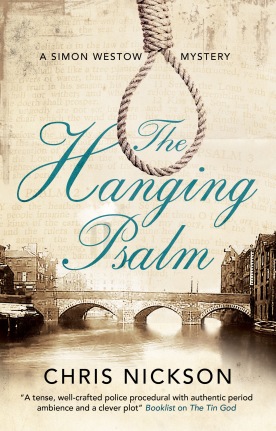 Nickson’s latest book introduces a new character, Simon Westow, who walks familiar streets – those of Leeds – but our man is living in Georgian times. England in 1820 was a kingdom of uncertainty. Poor, mad King George was dead, succeeded by his fat and feckless son, the fourth George. Veterans of the war against Napoleon, like many others in later years, found that their homeland was not a land fit for heroes. The Cato Street conspirators, having failed to assassinate the Cabinet, were executed.

Simon Westow is a thief-taker. These days, he might be a bounty hunter or a PI. There is no established official police force, merely a Constable who is neither use nor ornament.
“The constable. It was a name rather than a job. A position. All the ceremony and the money that went with the post, but none of the work. Cecil Freeman had been part of the council long enough to earn the sop, a nest to gild his retirement. He supervised the watch, old men who covered the different wards of Leeds and hobbled a mile rather than risk a fight.”

Westow is a tradesman, just like a plumber. He is paid by results, and when he is tasked with finding the kidnapped daughter of a prominent mill owner, it poses no major problem and the young woman is soon found and returned to her family. But – and it is a huge ‘but’ – Westow and his ally, a wraith-like and embittered girl of the streets called Jane, learn that there is much more to the kidnapping than meets the eye. Their nemesis is a vengeful and resourceful man called Julius White, who has returned from a seven year transportation sentence to settle scores with those who put him on the prison ship sailing to Australia.

Samuel Johnson said, “When a man is tired of London, he is tired of life,” but Nickson has eyes and ears only for Leeds. I am always drawn to writers who make a vivid sense of place a major character in their novels, hence my fascination with the London of Christopher Fowler, Jim Kelly’s Fenland and the brooding hills of the Welsh Marches as portrayed by Phil Rickman. Nickson, and his Leeds across the generations, is up there with the best. Think of the subtleties of a Rembrandt portrait, every line and wrinkle faithfully reproduced, but also think of that great painter’s warmth and the deep compassion of his vision.

Nickson employs a simple but astonishingly effective plot device, that readers of his novels will recognise. A crime is committed. The perpetrator is either unknown, or a known villain who has gone to ground in the alleys and ginnels of Leeds. The central character, be it Richard Nottingham, Tom Harper, Lottie Armstrong or Dan Armstrong, must then call in favours, walk the streets, mingle with pub low-life or knock on the front doors of posh houses in search of information. This enables Nickson to bring Leeds to life across the centuries, its dark places with poverty so intense that it reeks, and those airy vaulted buildings where men of property and money take their leisure and talk business.

The author is also a highly respected music journalist, and he will be aware that the great Woody Guthrie said something along the lines of, “I only use three chords; maybe four, if I’m trying to impress a girlfriend.” Nickson is equally parsimonious with his prose. There are no flounces, no frills and no flourishes but, maybe because of this economy, there is memorable poetry, albeit bleak, such as when he describes the ‘fallen women’ of Leeds.

“Too many were desperate. All it took was the promise of a meal and a bed. And then enough gin and laudanum to dull the pain of living and the agony men inflicted. If a few died, there was ample room for the burials. Girls without names, without pasts; no one would ever ask questions.”

Westow’s pursuit of Julius White is thrilling stuff. The ex-convict’s desire for revenge has created a fire, and the character forged in its flames emerges as the embodiment of evil. Maybe it’s just me, but this novel casts a more sombre shadow than previous Nickson Leeds novels. Westow certainly carries deep psychological scars from his institutional upbringing, and Jane is a very dark, complex and troubled soul.

The Hanging Psalm is published by Severn House and will be available from 28th September. In case you are puzzled by the price on the Amazon listing, you need to know that the publishers sell mainly to public libraries, so check that your own library has this book on its acquisition list.

If you are new to the books of Chris Nickson, then click the blue link to discover why I am such an admirer.