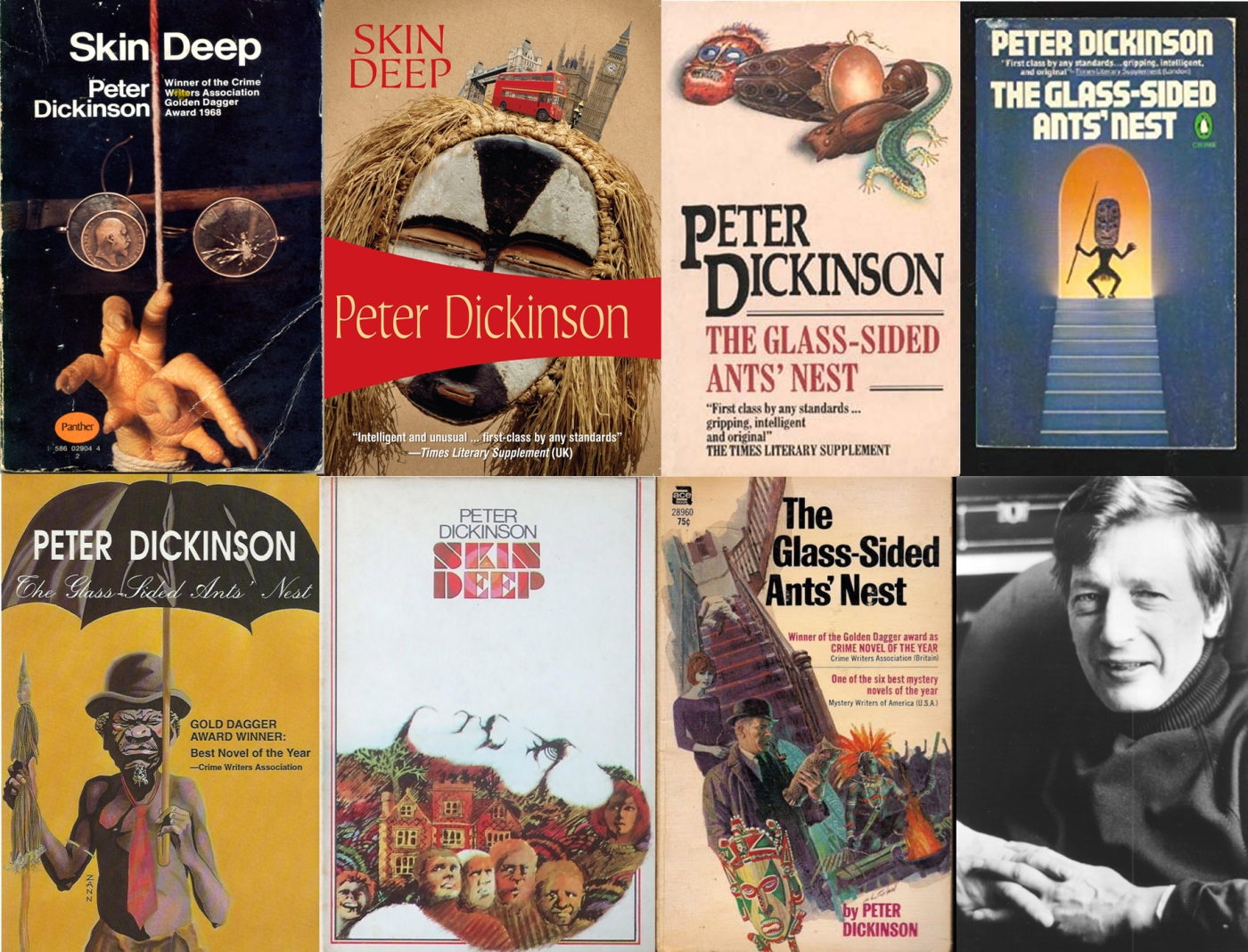 In June 1968 USA publishers Harper & Row released a book titled The Glass Sided Ants’ Nest. The novel, by Peter Malcolm de Brissac Dickinson, aka Peter Dickinson, was simultaneously published in Britain by Hodder & Stoughton as Skin Deep and won a CWA Gold Dagger in that year. Both titles are still available

Incidentally, I don’t think there are many Old Etonian authors around these days, but Dickinson (left) was there from 1941 to 1946, and it is tempting to wonder if he ever rubbed shoulders in those years with another Eton scholar by the name of Robert William Arthur Cook, better known to us as the Godfather of English Noir Derek Raymond, who was there from 1944 until 1948.

Skin Deep introduces us to London copper, Superintendent Jimmy Pibble, who was to feature in several subsequent mysteries. Already, Dickinson sets out his stall. Writers more ready to twang the purse strings of the book buying public might name their hero something more suggestive of intrigue and danger, like Jack Powers, Max Stead, Dan Ruger, Will Stark or Tom Caine. But Jimmy Pibble? He sounds more like a walk-on player in a Carry On film. But this, we soon learn, is Dickinson’s little joke, perhaps at the expense of lesser writers or less demanding readers. Pibble is highly intelligent, sensitive, but no-one’s pushover and, despite several bitterly ironic turns of events, nothing in the story is played for laughs.

The stage set of Skin Deep is brilliantly bizarre. Even the modern maestro of wonderfully eccentric plots, the Right Honorable Member for King’s Cross, Mr Christopher Fowler, might have baulked at this one. In a sturdily-built but nondescript London suburb, Flagg Terrace, live the exiled sole survivors of an ancient New Guinean tribe, the Kus. They survived a massacre by Japanese invaders in 1943 and have relocated to London. These folk, some crippled by genetic ailments, have transformed their home into a strange replica of their home village. The men lead separate lives from the women, and they practice a religion which is a perplexing blend of missionary Christianity and their native beliefs. Flagg Terrace has not been gentrifird:

“The tide of money had washed around it. The hordes of conquering young executives, sweeping down like Visigoths from the east and driving the cowering and sullen aboriginals into the remoter slums of Acton, had left it alone. Neither taste nor wealth could assail its inherent dreadfulness.”

When Aaron, the leader of the Ku folk, is found dead, battered to death with a carved wooden owl, Pibble is given the task of discovering the killer. He is clearly regarded by his more conventional superiors as a good copper, but something of an oddball, and someone to be kept as away as possible from high profile cases.

To say that the Kus are an odd lot is an understatement. Among the residents are Dr Eve Ku, a distinguished anthropologist. She is married to Paul Ku, but she can only be referred to as ‘he’ due to her countryfolk’s distinctive take on gender politics. Robin Ku is, on the one hand a rather clever teenager who has an alter-ego as a Ku drummer, beating the traditional slit drums as an accompaniment to sexually charged tribal rituals. Add into the mix Bob Caine, a neighbour of the Ku’s. He is what John Betjeman called “a thumping great crook”, but he is a sinister fraudster who was not only implicated in the Japanese destruction of the Ku people, but has serious connections to organised crime in the here-and-now.

Skin Deep is a wonderful example of literary crime fiction in which the author doesn’t write down to his audience, but skillfully uses language to evoke mood, ambience and atmosphere. Dickinson’s ear for dialogue is attuned to the slightest inflection so that we instantly know how is talking, without the need for clumsy prompts. Jimmy Pibble is a delightful character with a gentle streak of misanthropy in his soul. His idea of a good pub is:

“…a back street nook kept by a silent old man who lived for the quality of his draught beer. It would be empty when Pibble used it, save for two genial dotards playing dominoes.”

Pibble’s view of the policeman’s lot is similarly sanguine:

“That was the whole trouble with police work. You come plunging in, a jagged Stone Age knife, to probe the delicate tissues of people’s relationships, and of course you destroy far more than you discover. And even what you discover will never be the same as it was before you came; the nubbly scars of your passage will remain.”

Don’t be misled into thinking that there is anything remotely Golden Age or cosy about this book. It is often darkly reflective, and Aaron’s killer is both unmasked and punished in one tragic moment of unfortunate misjudgment by Jimmy Pibble. There were to be five more novels featuring the distinctive detective:

Peter Dickinson was also a successful and widely admired author of children’s books. He died in 2015 at the age of 88. Click the link to read an obituary.