Two surnames repeatedly crop up in these 19th century accounts. One is the Coroner, Dr Sharpley, and the other is Alfred Ticklepenny, the lock-keeper, whose house often played host to the melancholy duties of Dr Sharpley. Where was the house? I am told that there were only two lock-keeper’s cottages actually built beside the canal, and they were at Tetney and Top Lock. Old maps show a building just to the east of the lock, but nothing remains of it now.

This is from Stuart Sizer, who is the archivist of the Louth Navigation Trust:

When the Louth Navigation Canal was built, one of the locks of the canal was built on the land farmed by Joseph Ticklepenny.  This lock subsequently became known as “Ticklepenny Lock”.  Joseph’s youngest son, Thomas, became the lockkeeper at Ticklepenny Lock.  In addition, he farmed the land inherited from his father (the death/burial of Joseph has not been found).  For the next 115 years the family was associated with the canal in one way or another, either sailing the canal, (one became captain of a sea-going vessel which plied as far as Scarborough and Grimsby), or as lockkeepers, and one became overlooker of the canal.

Meanwhile, the tragedies continued to happen.

The Stamford Mercury of Friday 16th May reported “a very painful case of self-destruction. 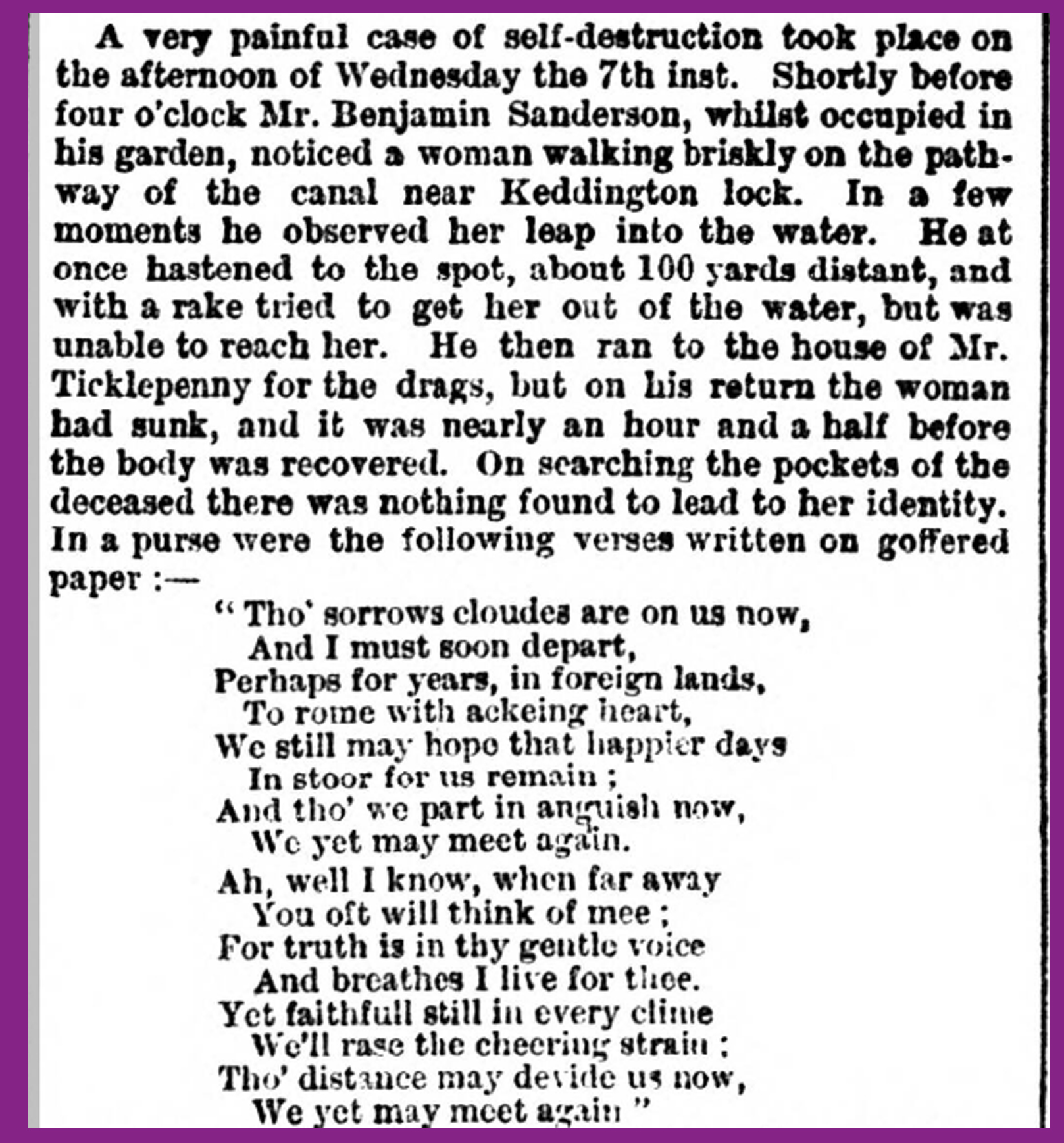 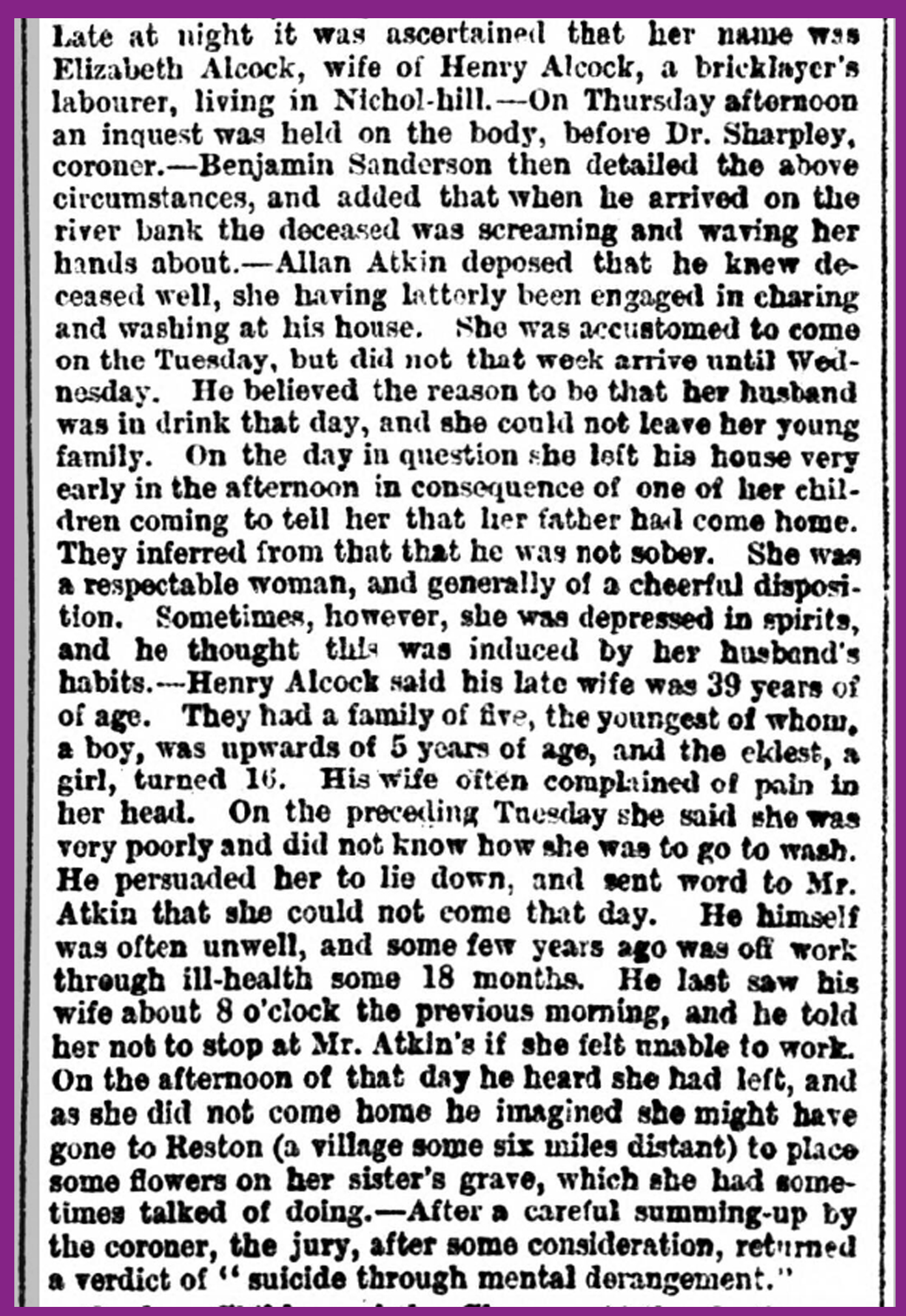 Last week Dr. Sharpley, coroner, and a jury composed of gentlemen from Louth and Keddington, met at the house of Mr. Ticklepenny, near the Keddington lock and bridge on the Louth canal, to inquire into the death of Thomas Swaby, aged 31, unmarried, son of Mr. Swaby, clothier, Eastgate. John Gray said he was passing along the bank on Sunday morning before ten o’clock when he saw a man’s coat lying on the footpath and a hat floating on the water. He at once went to the house of Mr Ticklepenny close by, and got a drag, with which, however, he failed to secure the body he supposed to be under the water.

He then hurried to the police-station and gave an alarm. John Robinson, labourer, Louth, said he was passing by on the morning in question when he was told by some persons about the coat and the hat. He at once plunged into the water and dived, but did not discover anything. On diving a second time he came in contact with the body of deceased. Life was extinct. Mr. Alfred Ticklepenny said he was on his way to the Sunday school about 8.40 when he met Swaby between a quarter and half a mile from his house, and coming from Louth. He did not then know who he was, but he noticed that he looked very peculiar. He did not look like a tradesman on a Sunday morning’s walk, as his boots were very dirty, and his general appearance was that of a man of dissolute habits.

J. Smurthwaite, carpet weaver, 72, James Street, said that about a quarter to 12 on Saturday night a neighbour of his named Brookes, living in Ramsgate, brought Swaby to his house to see if he would give him a night’s lodging. Brookes said he would have taken him in, but his wife was ill. He agreed to do so, and Brookes paid sixpence for the lodging. Swaby told witness he had been locked out. He saw nothing particular in his manner or appearance; he was as bright and sober as possible. Deceased had not been to his house before.

On Sunday morning he called to witness, and asked him if he knew what o’clock it was. He answered he did not, when Swaby said it was just eight o’clock, and wished he would come down and open the door, as he could not manage the queer old lock. He left the house without breakfast. A man named Sanderson deposed to having noticed deceased early on Sunday morning. He saw him coming along towards Mr. Smith’s gate and then turn back again. He took hold of a gate-post and turned round two or three times, and at, last turned off into the road leading to Louth. He thought the man did not look quite right. Thomas Padman, of the county policed, stated that on his being acquainted with the affair he at once went to the scene. In deceased’s pockets were a bunch of keys and a knife,  but no money. Gray gave him a letter which he had found, and 22 photographic, cards of celebrated sports- men, actor; and actresses.

The Coroner said the letter “did not throw ‘any light on’ the matter in hand.” It alluded to family matters and disputes with friends and relatives. It contained the ominous words, “they may I regret it when it is too late.” It was written apparently on the preceding Tuesday. He should be glad if he could advise the jury to deliver a verdict of accidental death or found drowned, but they must take into consideration the surroundings of the case. There was the coat deliberately taken off and laid on the bank, and as to the hat, it might probably have been placed by it . and been blown into the water. Isaac Swaby said his brother was always irritable and excitable after having been drunk; he could not at such times bear a word of a reproof, and had at such times repeatedly talked of putting an end to his existence.

On the following Bank Holiday last year the deceased told his friends he should make an end of himself. His brothers often remarked that he must be going crazed. He had for some time past been irregular in his habits. He had latterly paid his addresses to a respectable young woman, a servant in a gentleman’s family, and was in her company at the Mablethorpe regatta on the preceding Thursday. The jury returned a verdict of “Suicide whilst temporarily insane.” The Coroner said it was remarkable that when he held an inquest a few years ago on one who committed suicide by drowning in the canal be had been called upon to hold four inquests within a few days, and that this case was one of a similar multiplicity of inquests.

Reynolds News, in January, reported on what it called “a Singular Suicide.”

“Dr. Sharpley, the district coroner, hold an inquest at Louth, Lincoliishire, on Monday, on the body of William Barton, aged fifty-live, a publican. The deceased sent for his doctor on Saturday night, who found him evidently suffering from the effects of drink, and prescribed for him an opiate. Deceased then went to bed at midnight, but on Sunday morning he was seen by several persons walking rapidly from his garden into the country. It appeared he walked for two miles to the Louth Canal, into which he precipitated himself. When the body was recovered life was extinct. A verdict of ” Temporary insanity ” was returned.”

James Ingoldby was a disturbed young man whose mental frailty combined fatally with a liking for drink. He was found in the canal basin in March, and the inquest determined that he had taken his own life while temporarily insane.

From the Lincolnshire Chronicle, 18th June:

“On Friday second, inquest was held before the Deputy Coroner, respecting the death of man named Charles Turner, whose body was found in the canal, near Ticklepenny’s lock, on Thursday afternoon. Deceased, who was a Louth man, kept the Bell Inn, at South Somercotes, some years ago; recently he has been living at Hull. Thursday morning he left the Woolpack Inn, River Head, which is kept by his mother in-law, Mrs. Hewson. Some time afterwards, in consequence of his coat being found on the bank of the canal, a search was made for him; his body was soon found in the water, and on being taken out, life was quite extinct. After hearing the evidence, the jury returned verdict of “Drowned himself whilst of unsound mind.”

And there was this, from the Stamford Mercury, published on the same day: 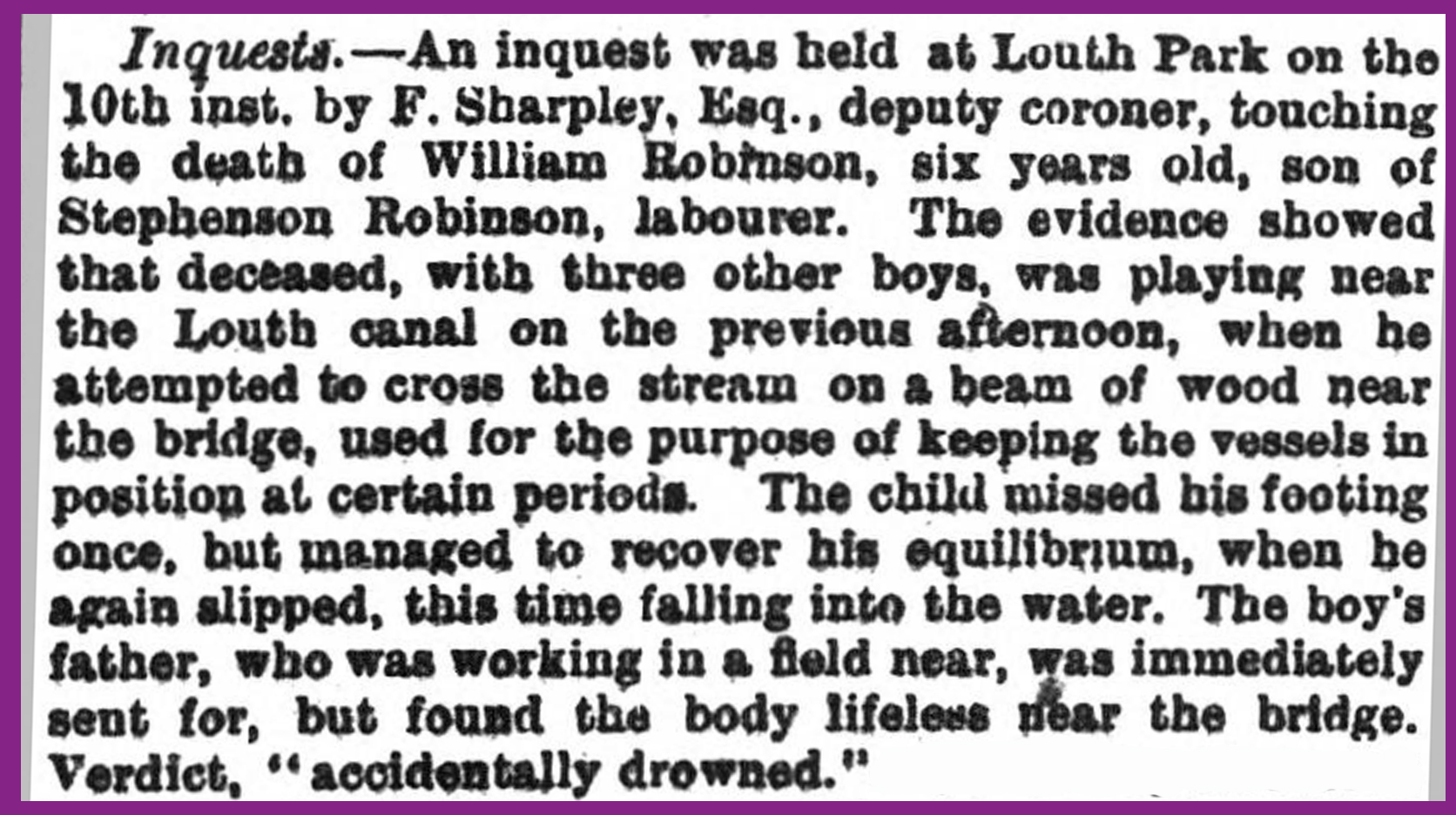 The Boston Guardian just had three lines to spare here in June. “A married woman named Grantham committed suicide at Louth on Wednesday. Her dead body was found in the Louth canal.” There were several Grantham families in Louth, and the census information gives us Fanny, aged 43, MA, aged 34 and Elizabeth, aged 18. In the 1891 census there is no mention of Fanny, so perhaps she was the unfortunate soul.

This was a bad year for accidents, with deaths in April and December  .