BLACKOUT . . . Between the covers

December 1939. Berlin. The snow lies deep and crisp and even, and Kriminalpolizei Inspector Horst Shenke is summoned to the Reich Security Main Office to meet Oberführer Heinrich Müller, a protege of Reinhardt Heydrich and recently appointed head of the Gestapo. Müller has a tricky problem in the shape of a former film star, Gerda Korzeny. Her husband is a lawyer and Nazi Party member who specialises in redrafting potentially awkward pieces of existing legislation in favour of the Party. And now Gerda is dead. Found by a railway track with awful head wounds. She had also been brutally raped. But what does this have to do with Heinrich Müller? His problem is that Gerda Korzeny was known to be having an affair with Oberst Karl Dorner, an officer in the Abwehr, Germany’s military intelligence organisation, and the Gestapo man wants the matter dealt with quickly and discreetly.

We learn that Schenke is a very good copper, but that his career has stalled because he has, thus far, refused to become a Party member. In his younger days, Schenke was a well-known racing driver, until a near-fatal accident forced him to quit the sport. His only legacy from those heady days is a permanently damaged knee. He is romantically involved with a woman called Karin Canaris, and if that surname rings a bell with WW2 history buffs, yes, she is the niece of the real-life head of the Abwehr, Admiral William Canaris.

Although he initially believes that the case will not bring him into direct conflict with local Nazi officials, Schenke’s discovery that Berlin has a serial killer on the loose is of little comfort, as everyone in the Party, from Goebbels down to the lowliest apartment block supervisor is anxious to preserve public confidence in these early months of the war.  Oberst Dorner takes a step or two down the ladder of Schenke’s suspects when the killer strikes again, but this time fails to finish the job. The victim survives with bruises and shock, but Schenke finds himself in a tight corner when, after investigating the young woman’s several false identities, he discovers that her real name is Ruth Frankel, and she is Jewish. In normal times, her racial profile shouldn’t matter, but these are not normal times, and Party officials take a dim view of wasting valuable resources on any case involving Jews. 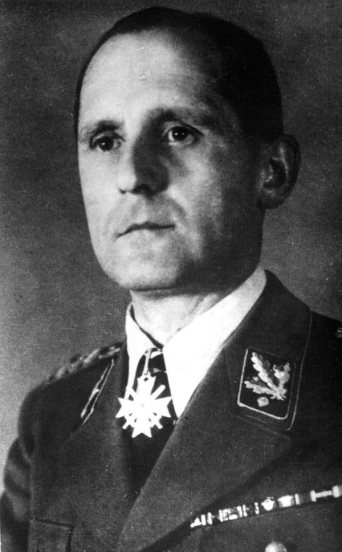 Oberführer Müller, (right) in an attempt to keep tracks on what Schenke is doing, sends a young Gestapo officer called Liebvitz to shadow the Kripo officer, and that allows us to meet a rather unusual fellow. These days, we would probably say he has Asperger’s Syndrome, as he takes everything literally, has no sense of humour and a formidable eye for detail. He is also a crack shot, and this skill serves both Schenke and the department well by the end of the book.

Simon Scarrow cleverly allows Schenke makes one or two mistakes, which makes for a very tense finale, but also establishes him as a human being like so many other fictional coppers before him – tired to the point of exhaustion, frustrated by officialdom and trouble by his conscience. Before the book ends, we also meet the deeply sinister – despite a superficial icy charm – Reinhardt Heydrich.

Comparisons between the worlds of Horst Schenke, Philip Kerr’s Bernie Gunther and David Downing’s John Russell are inevitable, but not in any way damaging. A good as they are, neither Kerr nor Downing have taken out a copyright on the world of WW2 Berlin. Simon Scarrow shines a new light on a city and a time that many of us think we know well. He creates vivid new characters – and revitalises our enduring fascination with some of the historical monsters that stalked the earth in the 1930s and 40s. I sincerely hope that this becomes a series. If so, it will run for a long time, and grip many thousands of readers. Blackout was first published in hardback in March this year, and this Headline paperback is available now.