THE BODY LIES . . . Between the covers

s the immortal Juliet once asked, “What’s in a name?” To her, not very much, as I recall, but it takes a brave novelist – such as Daphne Du Maurier in Rebecca – to keep the narrator and central character anonymous. Jo Baker uses this literary ploy in her latest novel, The Body Lies. Even the title is ambiguous, but the young woman at the centre of this dark domestic thriller is anything but anonymous or sketchily drawn. 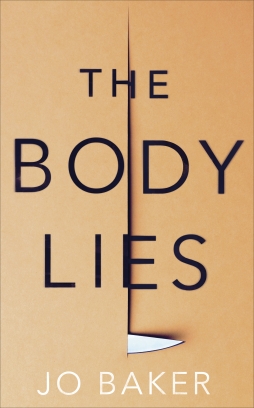 In the absence of a name, what do we know of her? She is a writer who, like so many others in real life, has been published but needs a day job to stay afloat. She is married to a rather dull but worthy London schoolteacher. They have a young son, Sammy and, in an effort to re-establish her identity she makes a successful application for a lecturing job at a university in the north of England. Husband Mark is unwilling to leave his post, and so they agree to live separately but meet up at weekends. At the very beginning of the novel the woman is assaulted by a stranger while she is out jogging: the attack is not physically serious but leaves deep mental scars.

She finds herself in a provincial university which is aspirational rather than distinguished, and once she has conquered her nerves about delivering lectures, her main challenge is to conduct tutorial sessions with a group of would-be authors, each drawn to the crime fiction genre. The students are a diverse bunch: a voluble and emotive American woman who is, if nothing else, extremely ‘woke’; a suit-and-tie solicitor who is a fan of gritty police procedurals where the corpses are invariably female; most troubling – and troubled – is a young man called Nicholas who is writing a stream-of-consciousness narrative about a mysterious death which could be suicide, or then again….

hen Nicholas and his tutor go beyond the accepted boundaries of student-teacher relationships, the story moves from a wry and sardonic satire on the political and social politics of schools and universities, and takes on a much darker hue. Nicholas disappears, but sends in the weekly updates to his work-in-progress via email – and they are nothing more or less than a blow-by-blow account of his most recent sexual encounter.

All the familiar tropes of modern British domestic noir kick in, to good effect. We have a stalker, marital infidelity, a woman alone in a remote cottage, the debilitating after effects of recreational drug use, a murder disguised as a suicide and, tellingly, a very scary confrontation on a Wuthering Heights-style moor.

Jo Baker has written an intriguing and very clever novel which, while asking probing questions of readers and writers of crime fiction regarding their tolerance of the woman-as-victim trope, never preaches. Her nameless but vividly real central character is memorable for her courage, resilience and sheer humanity. The Body Lies is published by Doubleday and is out on 13th June.