LET US NOW PRAISE FAMOUS MEN . . . An appreciation of Arthur Bryant & John May

The origin of those six words is a biblical text, chapter 44 of Ecclesiasticus, a book of the bible which, for Protestants, was shunted off the mainline into the sidings of The Apocrypha. The first ten lines of the chapter are: 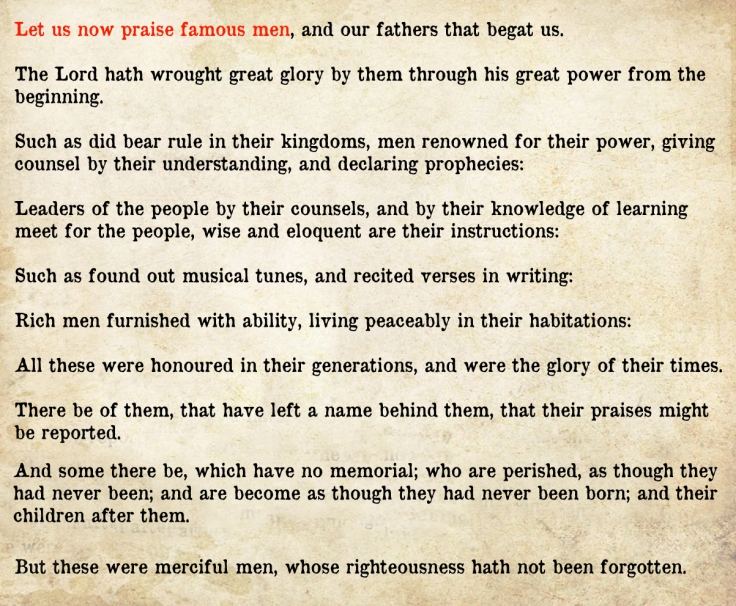 Aficionados of Christopher Fowler’s Bryant & May series, which ended on the final page of London Bridge is Falling Down will know that some of the lines written by the  biblical scholar  – a chap called Sira, apparently – are more applicable to Arthur and John than others. “Leaders of the people by their counsels..”? The pair, especially in the autumn of their careers certainly led the Peculiar Crimes Unit “by their counsels” in spite of the efforts of the nominal boss, the hapless Raymond Land and the myriad civil servants who sought to sink the unit and all who sailed in her.

I think we move on fairly quickly from “Such as found out musical tunes and recited verses in writing..” as neither was particularly musical, but Arthur did occasionally recite verses, usually in the form of riddles that baffled everyone else. “Rich men furnished with ability …“? John could always afford a decent suit, but what Arthur did with his salary is anyone’s guess. His disregard for sartorial elegance and the modest accommodation provided by his long-suffering Antiguan landlady, Alma Sorrowbridge suggested that he spent little on worldly concerns. As for “living peaceably“, John was always something of a conciliator, but Arthur had a savage tongue, particularly when faced with jobsworths or obstructive administrators. It has to be said, though, that his barbs were usually so shrouded in classical allusion that the victims were seldom bright enough to know they were being insulted.

Sadly, except by Janice, Colin, Meera and the rest of the PCU, Arthur and John were far from “honoured in their generations..” let alone becoming “the glory of their times.” In terms of the miserable bureaucrats who hated the very thought of the Peculiar Crimes Unit, then Arthur and John are almost certainly “perished as though they had never been..“, but for the of thousands of grateful readers, people who loved the sounds and smells of hidden London, appreciated the jokes, saw the torch of such great writers as the Grossmiths, Betjeman and PM Hubbard being carried brightly forward, chuckled quietly at the nostalgic product placing contained in the depths of Arthur’s coat pockets, and shared the poignancy of those moments when the two old gentlemen gazed down at the river from their special place, Waterloo Bridge – the final eleven words of the biblical quote will resonate as long as there are books to be read, jokes to be shared and dreams to be dreamed.

One thought on “LET US NOW PRAISE FAMOUS MEN . . . An appreciation of Arthur Bryant & John May”