I have a close friend who keeps himself fit by walking London suburbs searching charity shops for rare – and sometimes valuable – crime novels. On one particular occasion he was spectacularly successful with a rare John le Carré first edition, but he is ever alert to particular fads and enthusiasms of mine. Since I “discovered” PM Hubbard, thanks to a tip-off from none other than Phil Rickman, my friend has been on the lookout for for anything by this English writer (1910 – 1980) and his latest find, A Hive of Glass is a Panther Crimeband paperback, published in 1966. This was a year after Michael Joseph published the first edition (left), and Hubbard fans could have bought the paperback for the princely sum of 3s/6d (about 16.5p in modern money).

In his best works Hubbard gives us an ostensibly benevolent rural England; small towns, pretty villages, ancient woodlands, the warm stone of village churches and old parkland (always with a time-weathered manor or house at its centre). This England, however, invariably has something menacing going on behind the façade. Not simply, it must be said, in a cosy Midsomer Murders fashion, but in a much more disturbing way. Hubbard doesn’t engage with the overtly supernatural, but he teases us with suggestions that there might – just might – be something going on, an uneasy sense of what Hamlet was referring to in his celebrated remark to Horatio in Hamlet (1.5.167-8)

In A Hive of Glass, a gentleman of undisclosed means, Jonnie Slade, pursues his lifelong interest in antique glassware. He is an auctioneers’ and dealer’ worst nightmare, with an encyclopaedic knowledge of styles, techniques – and market value. He becomes aware of an important piece of sixteenth century glass – to the uninitiated, not much more than a glass saucer – whose provenance includes the crucial involvement of none other than Gloriana herself. Looking to find more information on the tazza, made by the legendary Giacomo Verzelini, he visits an elderly man whose knowledge of the period is legendary, only to find him dead in his study. With only a couple of amateurish photographs and a diary entry to guide him, Slade drives out of London to the remote village of Dunfleet.

In Dunfleet he meets a young woman called Claudia. Their erotically charged relationship is central to the story, as is the fact that she is the niece of Elizabeth Barton, the elderly woman in whose house the tazza is hidden. Even to himself, Slade’s motives are unclear. Does he want to steal the tazza? Does he just want to confirm its location? Does he suspect Claudia of attempting to defraud her aunt? 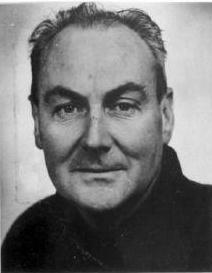 Seldom, however, can a treasure have been protected by two more menacing guardians in Aunt Elizabeth and her maid-of-all-work Coster. Remember Blind Pew, one of the more terrifying villains of literature? Remember Tod Browning’s Freaks (1932) and the decades that it was hidden from sight? With a freedom that simply would not escape the censor today, Hubbard (right) taps into our visceral fear of abnormality and disability. Hubbard has created two terrifying women and a dog which is makes Conan Doyles celebrated hound Best In Show. The dog first:

“It was pinky-white all over and looked quite naked and scrofulous. Even from sideways its eyes were almost invisible behind puckered pink lids. It waddled and wheezed like a fat dog, but you could see most of the bones under the hanging skin. Its smell went past me as it it walked.”

Attached to the vile animal is blind Aunt Elizabeth:

“On the end of the lead came a long black glove and behind it Claudia’s Aunt Elizabeth. I had no idea, seeing her through a curtained window like that, how tall she was. She must have been all of six foot and her elaborately coiled hair put as much on her height as a policeman’s helmet…Her feet were as big as the rest of her. The skin was grey but clear and glossy and her smile, as she passed me, came back almost under her ear.”

Aunt Elizabeth’s maid, Coster, is equally terrifying. She is stone deaf, huge, and mutters to herself in a constant high-pitched monotone:

“She was a tall soldierly woman, with a frame much too big for that little thin, continuous voice. She wore a bunchy black skirt with a long apron over it and some sort of blue and white blouse over her great square top half. As it was, I could hear a continuous stream of sound, inflected and articulated like speech, but defying my analysis.:

I would have turned tail and ran as far from this trio of horrors as fast as my legs could carry me, but Slade is made of sterner stuff, and he stays to discover the hiding place of the Verzelini tazza, but not without considerable cost to his own sanity and sense of well-being.

A Hive of Glass is available as a Murder Room reprint, or you can search charity shops for an original version. For more on PM Hubbard and his novels, follow this link. 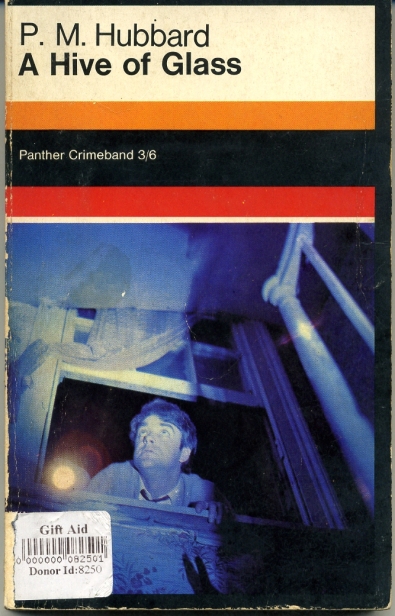