WHO ARE THESE FIENDS IN HUMAN SHAPE
WHO DO NOT HESITATE TO TURN THEIR WEAPONS
ON INNOCENT LITTLE BOYS AND HARMLESS WOMEN?

Thus thundered the Daily Mirror in the wake of The Tottenham Outrage in January 1909. It was not a rhetorical question then, any more than a modern version might be. Today’s answer would probably be Islamic extremists; in 1909 it would have been anarchists from Eastern Europe. Outside of the two world wars of the twentieth century, London has always been a very open city, liberal in outlook and welcoming to all manner of races and religions, a situation not always to the common good.

The golden twilight of the Edwardian era cast very little of its lustre on the East End of London. Despite glimpses of former opulence, such as the majestic houses built by the Huguenot weavers, themselves seeking refuge from Catholic persecution in France, Whitechapel and Spitalfields boasted some of the meanest streets and hovels in the civilised world. The courtyards and alleys which were the backdrop to the Ripper murders two decades earlier were still unsanitary, crime-ridden hosts to every vice known to man – and a few more besides.

The East End was a natural magnet for men and women – often, but not always, Jewish – from places such as Latvia and Ukraine, who had fled the savage pogroms inflicted on their homelands by the brutal secret police and political agents of Tsarist Russia. As with the pair of thugs who set out to steal the payroll from Schnurmann’s Rubber factory in Tottenham, the anarchists who met and plotted what came to be known as The Houndsditch Murders were adept at using the latest automatic firearms from mainland Europe. (Below) A Mauser pistol similar to the one used in The Houndsditch killings. 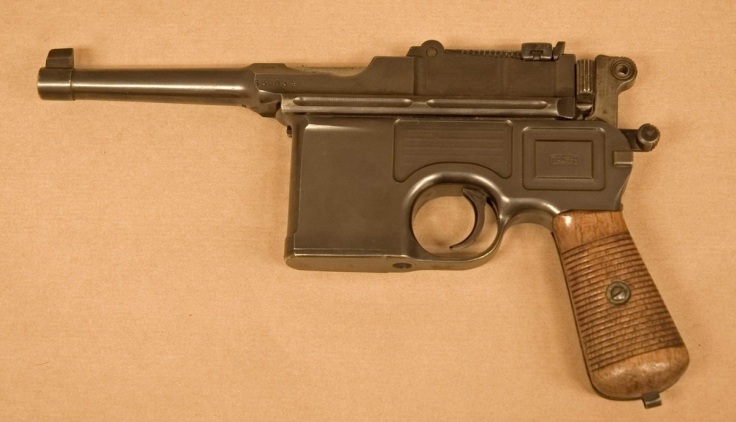 By contrast, the British police were part of another age altogether in terms of meeting fire with fire. The terrorist atrocities of my lifetime – The Munich Massacre in 1972, The Omagh Bombing in 1998, the Bataclan Atrocity of 2015 – have one key factor in common with the events of December 1910, and it is the conviction in the hearts of the perpetrators that they were not committing crime, but engaged in politically justifiable action.

For Fritz Svaars, John Rosen, Yourka Dubov, George Gardstein, Jacob Peters, William Sokoloff, Nina Vassilleva or any of the other seventeen revolutionaries who were involved in this case, there were no discreet bank transfers from Saudi Arabia and no fund raising black-tie dinners within New York’s Irish-American community. They needed money to further their cause, and it was never going to come by honest means. So, they planned a raid on a jewellers’ shop in the ancient London thoroughfare of Houndsditch. The proceeds, they hoped, would help keep them in bullets and slogans for months to come.

Henry Samuel Harris was the owner of the jewellers’ shop at 119 Houndsditch. The anarchists believed that he kept upwards of £20,000 worth of jewels in his safe. At face value, these items would be worth well in excess of £2,000,000 in today’s money. They hatched what they thought was a fool-proof plan. Renting an adjacent property, they intended to break through into Harris’s shop at the dead of night, and escape with the contents of the safe. Just like that, as the late lamented Tommy Cooper would say.

Friday evening, 16th December, 2010. It was bitterly cold, and the streets were deserted, partly because of the weather, and also because it was the eve of the Jewish Sabbath. Shopkeeper Max Weil, whose premises was next to the jewellers, could hear what sounded like workmen drilling and sawing. Weil went into Bishopsgate and found Constable Walter Piper. They returned to the shop, and after knocking on the doors of adjacent properties, Piper came face to face with George Gardstein. Gardstein’s reply to Piper’s enquiry was unconvincing. After the door was closed in his face, Piper went to get help, in the shape of PCs Walter Choate and Ernest Woodham. More police were summoned, but crucially it seems that Piper had omitted to tell his colleagues that he had made contact with the burglars, and that they would already be on full alert. 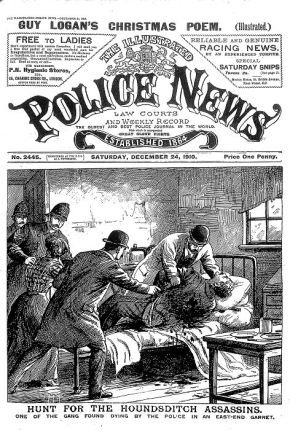 What followed was chaotic. The police, unwittingly, were walking into a situation where they would be faced with desperate men armed with sophisticated semi-automatic weapons. In the semi-darkness of the shop, there was a murderous burst of gunfire which woke people living in adjacent properties, and brought them from their beds. Three policemen were shot and killed – Sergeant Bentley, Sergeant Tucker and Constable Choat, of the City of London police. Bentley died from wounds to the shoulder and neck; Choat from six bullet wounds; Tucker from gunshots to the heart and stomach. Almost incidentally, George Gardstein was also shot – probably by one of his co-conspirators – and dragged from the scene. He died later at 59 Grove Street (now Goldring Street), off Commercial Road, a house leased to Peter Piatkov, later known as Peter The Painter. 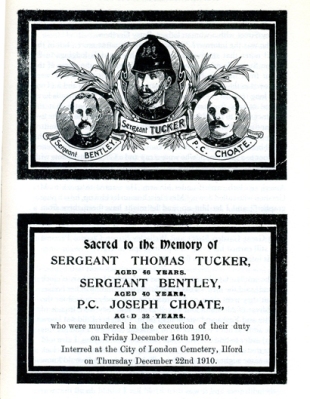 While London came to a standstill for the memorial service for the three dead policeman at St Paul’s Cathedral of 23rd December, the colleagues of the three men had not been idle. Tracing the culprits was made no easier by the fact that many of them had a different alias for every day of the week and, in the eyes of the expatriate Russian and Latvian community in the East End, the British Police were no different from the dreaded Okhrana secret police operating in their homelands. Eventually four members of the gang were brought to court in May 1911. Peters, Duboff, Rosen and Vassileva were charged with a variety of offences including murder and conspiracy to commit burglary. 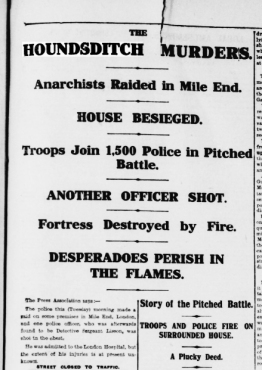 On 3rd January 1911, however, an event had occurred which gripped the imagination of the public at the time, and still casts a lurid shadow over a century later. Two of the gang, Svaars and Sokoloff, were believed to be holed up in a dwelling on Sidney Street in Whitechapel. The attempt to capture them featured a detachment of the Scots Guards, the fire brigade – and the Home Secretary, a certain Winston Churchill. Svaars and Sokoloff perished in the ensuing gun battle and fire, but a full account of the happenings of that day – both tragic and farcical – is for another time.

And what of the four defendants in court? Quite improbably, the case fell to pieces for a variety of reasons, including a lack of clarity over identity and conflicting evidence. Let The Daily Mail have the last word.

Not a single one of the assassins has been punished by the law.
It is no pleasant or satisfactory reflection that several of the principals in the crime
and many of their associates have escaped and are still at large.