A CASE OF ROYAL BLACKMAIL . . . Between the covers

Sherlock Holmes pastiches, if not a growth industry, provide regular and steady employment for many writers. There is an erudite and entertaining feature on Holmes impersonations by Stuart Radmore here, but now we have a new entrant to the lists. It is written by none other than the great man himself (of which more later) and the 24 year-old sleuth has stolen some of his future companion’s thunder by recounting the case in his own words. 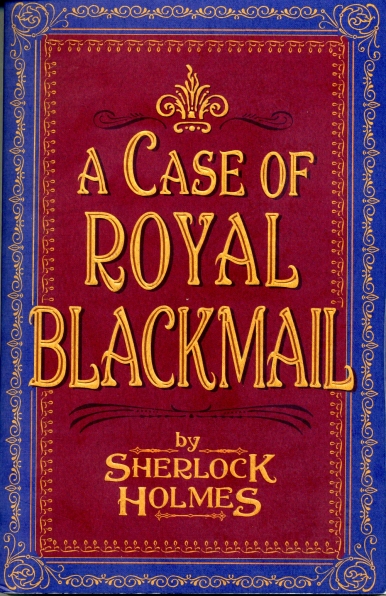 We are in London in the summer of 1879, and young Holmes has yet to meet the man who will write up his greatest cases. Holmes works for a guinea a day, and is striving to build his reputation. Within the first few pages, he has been hired to investigate two cases on behalf of a man who was already a celebrity, and another who would become infamous in his lifetime, but revered and admired after his death. The celebrity is Albert Edward, Prince of Wales, the future King Edward VII, a notorious Lothario whose battleground has been country houses and mansions the length and breadth of the country, the vanquished being a long list of cuckolded husbands. It seems that the heir to the throne has been in the habit of entering his sexual achievements in a diary – a kind of fornicator’s Bradshaw, if you will – but it has gone missing, and Holmes is charged with recovering it.

The second case is a strange request by a 25 year-old Irish aesthete and writer – one Oscar Fingal O’Flahertie Wills Wilde, who has lost – of all things – an amethyst tie-pin, a gift from his mother, the formidable Jane Francesca Agnes, Lady Wilde, and is desperate for Holmes to find it before an impending visit from Wilde mère.

One hundred pages in, and it is clear that the author is enjoying a glorious exercise in name-dropping. James McNeill Whistler, Lillie Langtry, Francis Knollys, Patsy Cornwallis-West, Frank Miles, Sarah Bernhardt, John Everett Millais and Rosa Corder (right) are just a few of the  real life characters who make an appearance, and it is clear that ‘Sherlock Holmes’ moves in very elegant circles.

In the course of his investigations our man presages some of the talents for which he will later became famous when the as-yet-unmet Dr John Watson takes over the narrative. He disguises himself as a waiter at a royal banquet on one occasion, and manages to impress his clients with his uncanny observational skills. The case is complicated when Holmes becomes inadvertently involved with the attempt by scandal-sheets to sell papers off the back of the very public rift between Lillie Langtry and her husband Ned. The case of Oscar’s missing tie pin rather goes on the back-burner as the hunt for the royal blackmailer intensifies, but it is resolved at the very end of the book with a rather delicious twist.

So just who, exactly, is this particular Sherlock Holmes? The last five words of the book reveal the true identity of the author, but I won’t do all the work for you. A little clue that you can Google – this person is a peer of the realm, an old Etonian, and wrote the biography Never Fear: Reliving the Life of Sir Francis Chichester.

The worst that can be said of A Case of Royal Blackmail is that is a little over-egged with the cast of celebrity names, but once in a while we all need a few hours of enjoyable escapism, and this well-researched and cleverly plotted homage fits the bill perfectly. It is published by Affable Media, and is available now.

Soon after his first short story appearance in 1891, Sherlock Holmes became a phenomenon.   The first parodies, by JM Barrie and Robert Barr (friends of Arthur Conan Doyle), were published within months, and dozens of light-hearted short parodies and pastiches continued to appear regularly in magazines for the next twenty years or so.
Conan Doyle’s final Holmes story appeared in 1927, and Conan Doyle himself died in 1930.   From about 1940 “new adventures” by Holmesian specialists began to appear, fitfully, in magazines and private printings. More so than earlier pastiches, these tended to keep closely to the fictional world established by Conan Doyle. A selection of these tales was later collected in “The Further Adventures of Sherlock Holmes” (1985), edited by Richard Lancelyn Green. 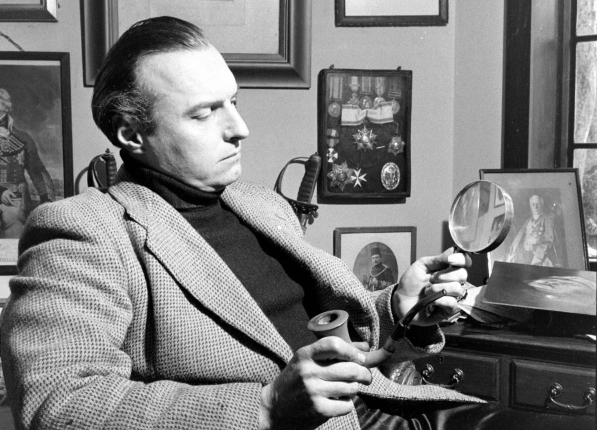 Conan Doyle’s copyright of his works originally lasted for fifty years after the author’s death. These rights were jealously guarded by the Conan Doyle Estate, in the person of Adrian Doyle, the author’s youngest son (above).  So it’s no surprise that he should be involved in the publication of the first authorised Holmes pastiches. These “Exploits of Sherlock Holmes” (1954) comprise twelve cases mentioned but never recorded in the original stories. They were to be written by Doyle and mystery writer John Dickson Carr, but  Carr fell ill after writing (or co-writing) six tales, and the remainder were written by Doyle alone.
Looking at the Exploits, it’s clear that the stories plotted by Carr are extremely imaginative.  Carr was the master of the locked room mystery and he re-used ideas from his earlier writings here. The six stories by Adrian Doyle are closer to the language of the original Holmes stories. However, they are also closer in plot; each of the tales has taken its main story line from one of the Holmes adventures written by Conan Doyle.   That said, it remains an enjoyable collection. Both men realised that the strength of the Holmes legacy lay in the short stories, which were generally superior to the novels.
The next pastiches were the by-product of two Sherlock Holmes films.

The first, Sherlock Holmes versus Jack the Ripper, by ‘Ellery Queen’ was published in 1967. This was a novelisation of the screenplay of  ‘A Study in Terror’, co-produced by Sir Nigel Films Limited, a company formed by the Estate to exploit Conan Doyle’s works on screen.   The book added a framing story wherein Ellery Queen reads a manuscript (written by Dr Watson) which sets out the action shown in the film. Queen then applies his own detective skills to ascertain whether Holmes correctly identified the Ripper.  The Ripper section of the book was the work of pulp writer Paul Fairman, and the Ellery Queen part by presumably ‘Ellery Queen’ himself.  An early line of Dr Watson’s narrative reads:

A warning for American writers attempting this sort of thing.

Next, in 1970, came The Private Life of Sherlock Holmes, a novelisation (by Michael and Mollie Hardwick) of the screenplay of Billy Wilder’s film of the same name. Again, produced in association with Sir Nigel Films.   Wilder called the screenplay respectful but not reverential. The film was much cut by the studio before its release, and the resulting story is unwieldy and at times near parody. All this is reflected in the book.  Still, some say it captures the Holmesian atmosphere reasonably faithfully. 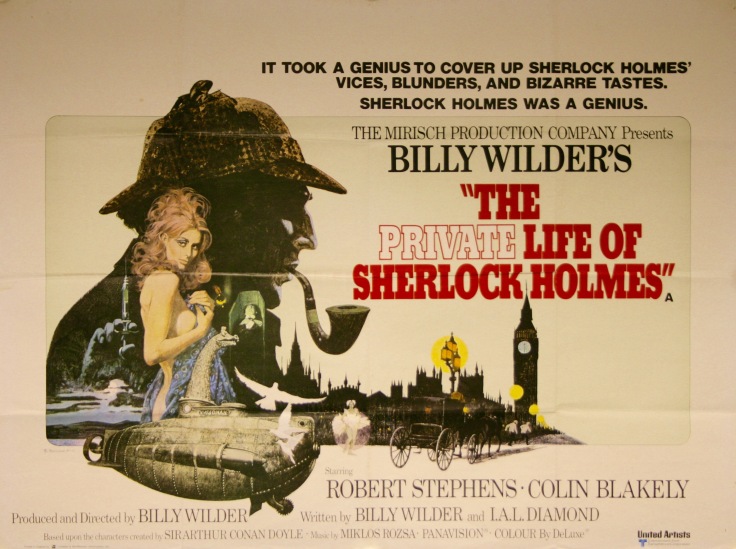 The early 1970s saw a growing interest in Victorian/Edwardian detective fiction, and with Sherlock Holmes in particular. The Estate was aware that its copyrights would expire at the end of 1980, and authorised a number of Holmes pastiches (for which they took a share of the sale proceeds).
The first was Nicholas Meyer’s The Seven Percent Solution (1974).    A contemporary review states:-

“The story is couched as an alternative explanation for the period between Holmes’s  supposed death at the hands of Moriarty (‘The Final Problem’) and his resurrection (‘The Empty House’). The hiatus which began with Holmes drying out extends into a case involving a pasha, a baron and a red headed temptress, during which Holmes instructs Freud in the mechanics of detection and gives some advice about the meaning of dreams.”
This highly successful novel is influential for two reasons.   It’s the first story to mix Sherlock Holmes with  real historical figures – in this case Sigmund Freud in 1890s Vienna – a plot device which has formed the dubious basis of countless tales since;  and it’s the first book  to question the accepted facts of the canon. Nicholas Meyer would develop both these themes in his second Holmes pastiche The West End Horror (1976), set in London’s 1890’s theatreland.
Now the gates had opened. 1977/8 saw the publication of Loren D Estleman’s Sherlock Holmes vs Dracula, Robert Lee Hall’s Exit Sherlock Holmes, and Michael Dibdin’s The Last Sherlock Holmes Story.    The first is a re-telling of a Dracula legend, with Holmes involved in the investigation; the second a Moriarty Lives! tale with elements of science fiction in the conclusion, and the last a return  to the world of Jack the Ripper. These novels can best be described as adventure stories featuring Sherlock Holmes, rather than Sherlock Holmes stories.   None of them were bestsellers, but they have all been reprinted over the years and have in turn inspired many more variations on these themes.

A few years earlier, another promising seam was opened with the publication of The Return of Moriarty by John Gardner; the first of what now seems an never-ending series of books by various hacks featuring subsidiary characters from the canon.
Finally, to top off the decade’s continuing fascination with all things Holmesian, 1979 saw the release of the film Murder by Decree  – a grafting of Sherlock Holmes onto Steven Knight’s then popular Freemasonry/Ripper theories. A novelisation of the screenplay duly followed.
Now seems a convenient place to stop. By December 1980 when the Doyle copyrights initially expired (they were extended to 2000 a few years later) almost all the elements of the present day copyright-free Sherlock Holmes industry were in place. For good or ill, all had been authorised by the Conan Doyle Estate.
From now on, almost all the pastiches were in the form of novels (short stories required too much work, and didn’t sell).
This presented a problem. The original Holmes novels are structurally flawed; the author cannot present a very intelligent central character with a case to solve, and then have that character take two hundred pages to solve it without making him look slow or obtuse.  Sub-plots, or  a back story,  must be introduced to fill the pages.   This is why the genius of Holmes (and Doyle) is best seen in the short stories.
Conan Doyle only once solved this conundrum – with The Hound of the Baskervilles – the pasticheurs never have.
July 5, 2020 0