BAD FOR GOOD . . . Between the covers

This hard-hitting police thriller is set in an English city renowned for its sea air, Regency buildings and – latterly – the Green-ness of its politics. It has also been a surprisingly popular setting for crime novels. Think Pinkie Brown, Roy Grace and Colin Crampton. We are talking, of course, about Brighton. Now we have a new character on the scene, in the shape of Joanne Howe, Detective Superintendent with Sussex police.

The plot hinges around a series of dire events in the life of Jo Howe’s boss, Detective Chief Superintendent Phil Cooke. Already trying to keep his mind on the job while his wife is dying of cancer, fate deals him another cruel blow when his son Harry, a promising professional footballer, is murdered, seemingly a casualty in a drug turf war. He steps down, but then comes into contact with a shadowy group of apparent vigilantes, who tell him that Harry was not the clean-cut sporting hero portrayed in the local media – he was heavily into performance enhancing drugs. The vigilantes – whose business plan is to provide a highly illegal alternative police force, where customers pay for the quick results that the Sussex Constabulary seem unable to provide – blackmail Phil into standing in the election of Police and Crime Commissioner. He is forced to agree, and is elected.

Meanwhile, things go from bad to worse for Jo Howe and her team. As they try to get to the bottom of Harry Cooke’s murder, an arrest goes badly wrong, and one of her Detective Inspectors – Bob Heaton – kills the suspect with his baton. He is jailed. Howe realises that there is some kind of vigilantes-for-profit group at large and she organises a sting operation at a local pub. When the bad guys flee the scene the ensuing pursuit goes pear-shaped, an officer is badly injured and the targets escape. Then the vigilantes fire bomb the pub in retaliation, the landlord dies and Howe has a furious dressing down from her chief constable. All is not what it seems, however, and Graham Bartlett lets us know that people very high up in the senior ranks of the police are as crooked as the proverbial dog’s hind leg.

The vigilantes are operating under the banner of an ostensibly respectable security outfit, but both they and the police seem equally clueless as to the identity of Harry Cooke’s killer. Bob Heaton’s boyfriend Chris – aka ‘Crush’ – works for the security firm, and Jo Howe persuades Bob – now released from jail but jobless – to infiltrate the organisation. Harry Cooke’s killer is finally identified, and the race is on to see who can get to him first, the police or the vigilantes. 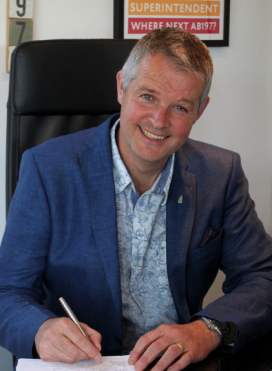 Graham Bartlett (right) was a police officer for thirty years and mainly policed the city of Brighton and Hove, rising to become a Chief Superintendent and its police commander, so it is no accident that this is  a grimly authentic police procedural. It is also very topical as, away from the violence and entertaining mayhem, it focuses on the seemingly insoluble problem of the divide between the public’s expectations of policing, and what the force is actually able – or willing – to deliver. Bartlett doesn’t over-politicise his story but, reading between the lines – and I may be mistaken – I suspect he may feel that, with ever more limited resources, the police should not be so keen to divert valuable time and resources away from their core job of catching criminals. My view. and it may not be his, is that effusive virtue signaling by police forces in support of this or that social justice trend does them – nor most of us –  no favours at all.

Bad From Good is an excellent debut novel. I hope it heralds a long running series, and I eagerly await the follow-up. Published by Allison & Busby, the book is out in all formats on 23rd June.