Whatever other qualities the book may have, the name of the town in which it is set gets first prize for the most sinister sounding location – Whistling Ridge. You just know that this is a town with dark secrets and simmering tensions that have festered for generations. Throw in a charismatic hellfire preacher who seems to have the town in his thrall, a girl who inexplicably disappeared into the woods, and a mysterious outsider who fascinates the young folk but arouses deep resentment in their parents – and you have a crackerjack thriller. Published by Doubleday, Tall Bones is out on 1st April.

WHAT HIS WIFE KNEW by Jo Jakeman 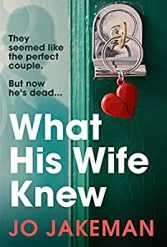 A husband disappears, leaving only a one word scribbled note that says “Sorry“. As the police assume Oscar has committed suicide and put the case at the back of the file drawer, wife Beth is determined to find out the truth and, to re-use an old metaphor, when people turn over stones, they shouldn’t be dismayed at what they see scurrying about underneath. Expect elements of deceit, revenge and betrayal – with many a plot twist.  This is a Vintage publication, and is available now in audiobook, Kindle and paperback.

School stories, at least those written for younger readers, were once ‘a thing’ but something of a rarity these days. This book, the third in a series, is aimed at adult readers, and is set in 1957 within a boys’ boarding school in Yorkshire, and is centred on a Jewish teenager who is made to feel an outcast by senior boys who feel he is not “one of us“. His fate, and that of his friend, another ‘outsider’ is in the hands of a powerful clan of senior pupils who bully even the ineffectual school leadership team. The Fatal Oath will be available on 28th of March and is published by The Book Guild.

THE RETREAT by Sarah Pearse

Sarah Pearse’s previous (and debut) novel The Sanatorium (click for review) was a huge commercial and critical success and now she returns with another psychological thriller based on the same theme – that of isolation, secrets, and mysterious death. There’s more than a touch of one of Agatha Christie’s most famous novels (choose the title you prefer!) here, as a group of people are stranded on an island retreat as a destructive storm prevents anyone leaving or arriving. It’s a case of “as soon as the weather clears..” but much can (and does) happen in the meantime! Published by Bantam Press, this will be available in July.

THE PEOPLE OPPOSITE by Georges Simenon 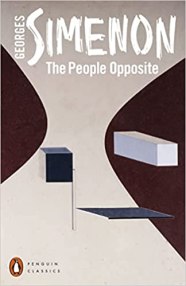 Penguin are publishing new translations of Simenon’s  stories. I’ve reviewed The Little Man From Archangel and Death Threats & Other Stories. This is another non-Maigret story, set in pre-war Russia, and tells the tale of Adil Bey, a lonely Turkish diplomat sent as consul to a dilapidated port on the Black Sea. He is viewed with suspicion by the locals, and when he develops a relationship with his Russian secretary, he soon learns that living in Stalin’s Russia as an outsider has many pitfalls. Translated by Sian Reynolds, this is a Penguin Classic, and is available now.