DYING INSIDE . . . Between the covers

Back in the day when I’m Sorry I Haven’t A Clue was actually funny, and I’m talking about the late 1970s, one of my favourite rounds was Late Arrivals At The Ball, where a servant announces the arrival of . . . cue wonderful and bizarre puns, such as:

I only mention this because twice now, within a few days, I have found a crime series to which I have come very late. This, for an avowed fan of police procedural novels, is pretty damning. At least the Trevor Negus novels featuring Danny Flint was only a three book series, but much to my shame I find that there have been ten previous books in the DCI Nick Dickson series. All I can do, is review the eleventh – Dying Inside – and mutter “mea culpa.” Below, numbers one to five in the Nick Dixon Books. 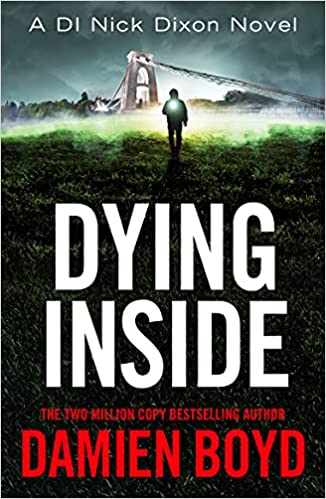 Nick Dickson works for Avon and Somerset Constabulary, so his beat covers much of England’s glorious West Country from Bristol down to Weston super Mare. He is relatively recently promoted, which is good for his salary and pension, but has dragged him into the vortex of tedium which includes mission statements, performance reviews and coma-inducing courses with titles like Developing Inclusive Management Styles In A Modern Police Service. ( I just made that up, but a pound to a penny something very like it actually exists) Dixon, like his creator, is a former solicitor, so he is very wise to the standard stunts pulled by defence lawyers, and it also accounts for his rapid promotion through the ranks. Witnesses often remark that he looks “too young to be such an important officer”, to which his response is usually a neutral smile

Here though, he has dead bodies to deal with. Not so good for the victims – firstly a number of sheep, secondly a dodgy accountant and then an HMRC manager investigating fraud – but good for Dixon’s state of mind. The two humans and the sheep have all been killed with fatal shots from a powerful crossbow. Were the sheep just practice targets while the killer honed his or her skills, or were they unrelated incidents? And what is the true story behind  the ocean-going yacht owned by the dodgy accountant capsizing and sinking taking with it one of its crew, Laura Dicken?

Bit by bit, Dixon completes the jigsaw, and is convinced that the deaths are revenge attacks by one of the people who were lured into a scam which ruined their pensions and left them more or less destitute. With his bosses anxious for him to wrap the case up and devote himself to the serious business of Neighbourhood Watch Liaison Committees and Diversity Webinars, Dixon has one or two surprises up his sleeve before the case can finally be closed. Dying Inside is a thoroughly entertaining read, full of twists and turns, and is published by Thomas and Mercer. It is out in paperback and Kindle on 22nd June.