PAST TIMES – OLD CRIMES . . . Whatever’s Been Going On In Mumblesby? by Colin Watson

I make no apology for returning to one of my all time favourite authors, the unassuming and hugely underrated Colin Watson. For a closer look at the man and his work, you can have a look at my two part study which is here. Whatever’s Been Going On In Mumblesby? was published in 1982, a year before Watson died and is the last of The Flaxborough Chronicles. This, then, is the final appearance of Detective Inspector Walter Purbright, and his earnest assistant Detective Sergeant Sydney. Love. The fun begins with this announcement in the local newspaper.

Mr Loughbury had since remarried, as they used to say, a much younger model, the undoubtedly attractive but ostensibly rather vulgar Zoe. Purbright becomes involved when, after the funeral of her husband, Zoe Loughbury, née Claypole, is discovered locked in the bathroom of The Manor House while someone seems to have set fire to the building. The fire is soon put out, but Purbright becomes aware (with the help of Miss Lucy Teatime, a local antique dealer who may not be entirely honest, but is scrupulously observant) that the late solicitor had in the house a collection of very valuable artifacts and paintings, all of which seem to have been ‘acquired’ from former clients, without a single bill of sale involved. Most bizarre among this collection is a piece of wood supposed to be a remnant of the True Cross. 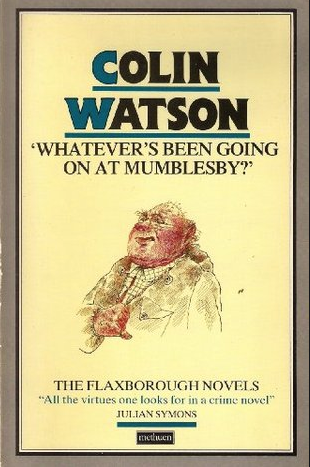 The true provenance of this is only revealed when Purbright investigates an apparent suicide which happened in the village church. Bernadette Croll, the wife of a local farmer was, in life, “no better than she ought to be”, and in death little mourned by the several men who shared her charms. Purbright eventually sees the connection between Mrs Croll’s death and  Mr Loughbury’s collection of valuables, when he discovers that the wood came from somewhere far less exotic than Golgotha.

One of Colin Watson’s more unusual achievements is that he is supposed to be one of the few people to have successfully sued Private Eye. He took exception to their writer describing his work as ‘Wodehouse without the jokes.’ He took them to court, and was awarded £750 in damages. Watson was no Wodehouse nor, I am sure, would he have claimed to be, but his jokes are not bad at all. Here. he reacts to a report from Sergeant Love:

“Love’s accounts were robbed of dramatic point somehow by his customary obliging, pleased with life expression. He would have described a public execution or a jam-making demonstration with equal cheerfulness.”

Purbright has a good but wary relationship with his boss, Chief Constable Chubb. They are discussing the vagaries in the behaviour of one of the females in the case:

“Mr Chubb waved his hand vaguely. ‘Who can say? Nervous trouble? Change of life?’ Menopause loomed as large in the chief constable’s mind as central heating and socialism.”

The owner of Mumblesby’s main restaurant has a wife who is not in the first flush of youth, but maximises her charms:

“She wore a dress of such deep cleavage that it resembled a long pair of partly drawn curtains, with a glimpse of navel at the bottom of the V, like the eye of an inquisitive neighbour, peeping out.”

As ever, Purbright’s mild manner and courtesy are totally underestimated by the criminals and schemers in and around Flaxborough. He has a steely perception which is more than a match for the rich but vulgar farmers who are up to their necks in the death of Bernadette Croll and, to show that he is no respecter of persons, he is equally merciless with the impoverished gentry. The jokes and comedy aside, for Walter Purbright justice is, indeed, blind – at least to class divisions and the county social hierarchy.

The Flaxborough novels are redolent of another time, certainly, and I suspect that they may well have been even when they were first published. Watson is a craftsman rather than a showman, but his plots are  clever and intricate. His humour, which failed to impress the literary critic of Private Eye, is in the indisputably English vein of George and Weedon Grossmith, and JB (Beachcomber) Morton, and I suggest it has modern echoes in the Bryant and May books by Christopher Fowler. Flaxborough is a place I continue to visit, and it never fails to please. Finally, thanks to Peter Hannan and Stuart Radmore for the lovely map of Flaxborough used in the feature image, which was originally created by Salim Patel.