GOLGOTHA . . . between the covers

Guy Portman (left) introduced us to Dyson Devereux in Necropolis (2014). I gave it 5* when writing for another review site, and I’ll include a link to that at the end of this post. Dyson was Head of Burials and Cemeteries in a fictional Essex town, and a rather individual young man. He is narcissistic, punctilious, cultured and, outwardly polite and thoughtful, but with an anarchic mind and a terrible propensity for extreme violence. The book both horrified and fascinated me but made me laugh out loud. Dyson Devereux was a Home Counties version of Patrick Bateman and his antics allowed Portman to poke savage fun at all kinds of modern social idiocies.

Dyson returned in Sepultura (2018) and he has moved to another town to do more or less the same day job. His main recreation is still killing people who upset him, either personally, or because of their unpleasant manners or appearance. He has fathered a son and takes but a passing interest in his upbringing. He is, however, appalled that Latin isn’t on the curriculum at young Horatio’s infant school. Having stayed just one step ahead of the English police Dyson comes a cropper when he commits murder while on a municipal exchange visit to Paleham’s twin town in Italy, and ends up in the hands of the Carabinieri.

Golgotha begins with Dyson a treasured guest at San Vittore Prison, Milan, awaiting his trial for murder. It is no place for someone of his refinement:

“ Tottering in this direction is a posterior-wiggling transexual. When he passes by, he winks at me and smiles, revealing a mouth crammed with chipped, rodent-like teeth. Up ahead a prisoner steadies himself against the wall with an emaciated, needle-track-ridden arm.”

Dyson views the prison as something like an amateur drama company acting out Dante’s Nine Circles of Hell, but he holds his poise thanks to frequent visits by his Italian girlfriend Alegra, who supplements the meagre prison fare with Amaretti biscuits and cremini al pistacchio chocolates. Neither is his taste for fine wine neglected, as his weekly sessions teaching English to the convicted gangster – who effectively, rules the prison – are enlivened with glasses of Amarone Classico Costasera 2012.

When he finally has his day in court, Dyson scorns the efforts of his lack-lustre lawyer and relies on his own charm and nobility of bearing to convince the court that he is an innocent man. He escapes the clinging arms of Alegra and returns to England without delay, anxious to be reunited with something from which separation has become a cruel burden. A loving family? A childhood sweetheart? The clear skies and careless rapture of an English summer day? No. A tin box containing several memento mori of his previous victims. Little oddments that he can sniff, fondle and treasure. Little bits of people who have had the temerity to upset him, and have paid the price.

The best satire is supported by strong girders of anger, and there is much on display here, most of it righteous. Horatio has been given the heave-ho for having the temerity to mock a fellow five year-old who has decided to change gender. The school’s reply to Dyson’s query throws a lighted match into a pile of dry tinder:

“I would hope that in today’s world, gender dysphoria wouldn’t cause confusion to a grown adult. As for children, yes, it can be confusing. But here at Burton Finch we have a proven track record of educating our charges in gender identity related issues.”

Dyson Devereux has a jaundiced view of the delights that decades of multiculturalism, diversity, and pandering to the lowest common denominator have bestowed on English suburbs:

“I pass a Sports Direct, a betting shop and a halal butcher, from which a disorderly line of veiled women protrude, chattering animatedly in several Maghreb-hailing languages. Iceland supermarket is followed by a pound shop, a halal chicken establishment and a Congolese social club.”

Sad to say, Dyson pushes his luck once too often after underestimating the collective momentum of a spurned Italian beauty and a seven feet tall Hungarian embalmer known as The Grim Reaper. If you are a sensitive soul who mistakes words for actual misdeeds then, please, go and read something else. If you share the view that life is essentially a grotesque comedy, acted out by individuals so preposterous that it is only satire that exposes them, then grab a copy of Golgotha. It is wicked, outrageous, and scandalously funny.

Golgotha will be available from 3rd December. 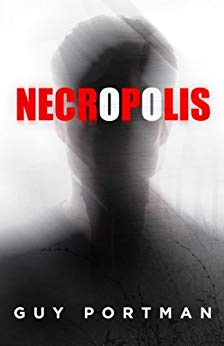