PAST TIMES – OLD CRIMES . . . Hell Is A City by Maurice Procter

he name Maurice Procter is not one that is regularly bandied around at crime fiction festivals when the Great and The Good are discussing pioneering and innovative writers of the past. He is, just about, still in print thanks to the wonders of Kindle and specialist reprinters such as Murder Room. I’m reluctant to use the fatal words “in his day”, but Procter was a prolific and popular writer of crime novels between 1947 and 1969. 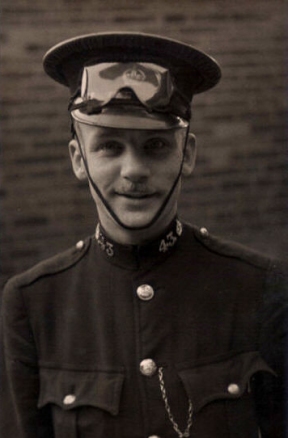 Born in the Lancashire weaving town of Nelson, Procter (left) joined the police force in nearby Halifax in 1927 and remained a serving officer until the success of his novels enabled him to write full time. In 1954 he published the first of a fifteen book series of police procedurals featuring Detective Inspector Harry Martineau. Martineau is a detective in the city of Granchester. Replace the ‘Gr’ with “M’ and you have the actual location pegged.

Hell Is A City is a dark tale which pivots around the enmity between Martineau and a violent and resourceful criminal called Don Starling. Starling is as hard as nails and doesn’t shrink from brutality towards fellow men – or women. Starling is ‘doing time’ but acts like a reformed man in order to escape close prison supervision. Naturally, he seizes his moment and goes over the wall and on the run.

tarling wastes no time in organising his next heist, and it is a daring cash grab. The victims are two hapless young clerks who work for city bookmaker Gus Hawkins. On their way to the bank with a satchel full of takings from Doncaster races, they are waylaid. Colin Lomax is coshed and left with a serious head injury but Cicely Wainwright fares even worse. Because the money bag is chained to her wrist, she is flung into the back of the getaway van and is killed by Starling as the gang make their escape over the moors to the east of the city. The bag is cut from Cicely’s wrist, and her body is dumped. Of course, this ups the stakes, much to the discomfort of Starling’s gang members, each of whom realises that they face the hangman’s noose if they are caught and convicted as accessories to murder. The hangman, by the way, is a well-known local resident:

“Clogger and Jakes turned their heads quickly, their smiles fading. They stared. Then Jakes pulled Starling’s knee aside and looked down at the girl’s face.
‘Cripes!,’ he said unhappily, “She’s croaked.’
Starling nodded. ‘Some time ago,’ he said.
‘You bloody fool,’ said Jakes, his voice rising with panic.
‘Hell fire!’ Clogger whispered, and he had indeed turned pale. ‘You didn’t have to do that, did you?’
Laurie Lovett was silent. He kept his eyes on the road as if nothing had happened. But a muscle of his jaw had started to twitch.
The same fear was upon them all. They were reminded of a man they knew by sight. He kept a pub in Hollinwood. The name of the pub was Help The Poor Struggler. The man’s name was Albert Pierrepoint.” 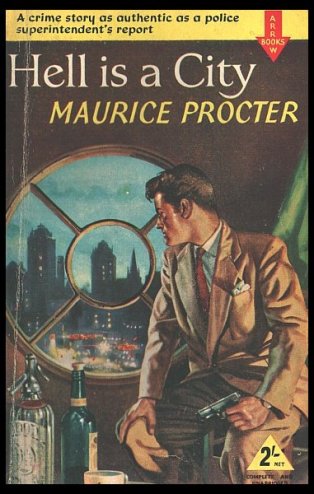 I was quickly hooked by this novel, for a variety of reasons. Anyone who has driven east out of Manchester in the direction of Sheffield (which makes a brief apparance as Hallam City) will recognise the changeless face of the moors, with their isolated pubs and gritstone houses clinging to the roadside. What has changed, however, is the view back towards Manchester. Where, in the early 1950s Martineau saw mill chimneys belching smoke, today we could probably, apart from the haze of vehicle emissions , see almost to the Irish Sea. We also know that Cicely Wainwright’s’s body would not be the last to be abandoned in the cottongrass, heather and bilberry of the Dark Peak.

CriFi buffs know that fictional Detective Inspectors are meant to have disfunctional personal lives. Few and far between are happy family men and women with faithful and understanding spouses who understand and compensate for the rigours of police work. Intriguingly, it is Martineau’s wife who is, at least initially, the guilty party. She is vain, socially over-conscious and, perhaps, sexually repressed.

“Julia Martineau was not unfaithful and it was impossible to suspect that she ever would be. She was only interested in fine clothes, social standing, attractive houses, and the affairs of her acquaintances. The connubial behaviour of other people (as a topic of scandalous conversation) was of more interest to her than her own or her husband’s. She was rarely aroused. The conjugal act was sometimes a duty, sometimes a favour to be granted, and always a ceremony which she allowed to be performed after it had been suitably prayed for. Lately, Martineau had ceased to pray.”

here are few happy marriages or standard relationships in Hell Is A City. Gus Hawkins has a young wife is a libidinous and money-grabbing charmer who has history with the dangerous Starling. Martineau’s driver and gofer, DC Devery, has a loving but precarious relationship with the beautiful Silver, who is a deaf mute. By the by, your Starter For Ten: which legendary fictional policeman is married to a beautiful deaf mute? No prizes, but that detective operates a long, long way from Manchester.

It would be pretentious and anachronistic to push this novel into the category box labelled Noir. That said, its low-key realism and unflinching depictions of the criminal class not only reflects Procter’s time with the police service but a reveal a gift for brevity and the essentials of story-telling which mark him out as a natural author, untaught but with an acute ear for dialogue and a genuine sense of the rough edges and frailties of human lives where unfulfilled aspirations nag away at happiness.

Murder Room do a budget-printed paperback of Hell Is A City, and second-hand editions are also available if you are prepared to splash the cash. The novel was made into a film, starring Stanley Baker as Martineau, and I will write about that in a later post. 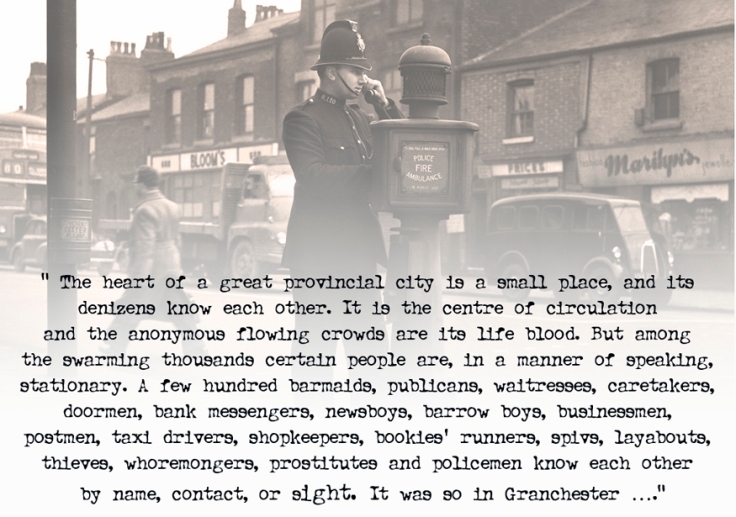