THE POSTMAN DELIVERS . . . A Book of Bones

I would be lying if I said I hadn’t been counting the days until this arrived. Kerry Hood at Hodder & Stoughton is to be commended for showing great patience in the face of my impatience, but it finally arrived. Kerry had mentioned that it might be something special, but then publicists always say that, don’t they? So, ripping off the sturdy cardboard wrapper ….

Ta-da! And there it was, the long awaited latest journey into the darkness of men and angels for the Maine PI, Charlie Parker. The adjectives are easy – haunted, conflicted, convincing, troubled, angry, brave … fans of the series can play their own ‘describe Charlie Parker’ game, but most importantly, our man is back.

Charlie Parker is back, and how! I was advised  that I might want to set aside a fair amount of time to read A Book of Bones but, blimey, Kerry was not wrong. At a little short of 700 pages, and weighing nearly 2lbs in old money, the book is certainly a big ‘un. New readers shouldn’t be daunted, though. John Connolly couldn’t write a dull sentence even if he went off to his Alma Mater, Trinity College Dublin, to do a doctorate in dullness. 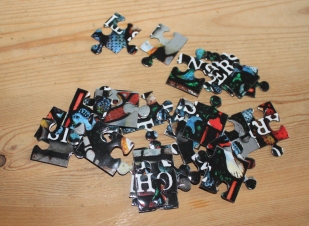 But there was more! Book publicists are an inventive lot, and over the years I’ve had packets of sweets, tiny vials of perfume, books wrapped in funereal paper and black ribbon, facsimiles of detective case files – but never a jigsaw. Wrapped up in a cellophane packet with a lovely Charlie Parker 20 year anniversary graphic were the pieces.

As I was always told to do by my old mum, I isolated the bits with the straight edges first. There was clearly a written message in there, set against the lovely – but sinister – stained glass background. Confession time; although the puzzle didn’t have too many pieces, I got stuck. Fortunately, Mrs P was taking a very rare day off work with a flu bug, and as she is a jigsaw ace, she finished it off for me.

So the publicity is brilliant. but what about the book? Parker could never be described as having a comfort zone, but over the last two decades he had been battling the bad guys on his home ground – usually the forests and shores of Maine. A Book of Bones sees him on unfamiliar territory, but heading for a winner-takes-all struggle with his adversaries Quale and Pallida Mors. They have chosen the battlefield, and it is the windswept and haunted moors of northern England. Quale and Mors are close to achieving a lifetime ambition – to reassemble the pages of The Fractured Atlas, a book which, when complete, spells death and a spiritual apocalypse. Parker is older, slower, and weakened by his battles with the killer angels, but this time, he is playing for keeps. A Book of Bones will be on sale from 18th April 2019.

The last inclusion in this delightful package from Hodder & Stoughton was a lovely postcard from the man himself, John Connolly. If you click on the image, you can read more about the author and his most memorable creation.