THE BOY IN THE HEADLIGHTS . . . Between the covers

Somewhere there is a book of rules that must be followed by writers of police procedurals, and high on the list is that senior investigating detectives must be difficult folk, with troubled personal lives, possibly prone to addiction of one kind or another. The addiction can range from being relatively harmless, like Mark Billingham’s Tom Thorne and his love of mournful country songs by Hank Williams, via Nero Wolfe’s gluttony, right through to Sherlock Holmes and his occasional use of cocaine and morphine.

Norway’s Samuel Bjork ticks the boxes with his Olso cops Holger Munch and Mia Krüger. Munch is a bearded bear of a man, overweight and stuffed into his habitual duffel coat like a fat foot into a shoe two sizes too small. His home life is in disarray. Separated from his wife, his daughter Miriam recovering from a serious injury, he seems to treat those people with – at best – edgy tolerance, but his obsession is with the job, and catching criminals. Krüger’s back story makes Munch’s people look like candidates for a TV breakfast cereal advert emphasising warm family values. The story opens with her recovering from – in no particular order – alcoholism, a fatal shoot-out after which she was accused of murder, and the haunting death of her sister, victim of Oslo’s drug scene.

There is a brief but vivid prologue taking place fourteen years before the main story, which then relates a series of bizarre killings. The dead include a ballet dancer found in a remote lake, a jazz saxophonist lying on a bed in a flea-bitten budget hotel, a teenage boy in the boot of a burning car, and a Catholic priest slumped in his own confessional. All have died from being injected with antifreeze, and the killer has left a clue – a number – at each site.

Seasoned veterans of the serial killer genre will know that there are several variations on a theme as regards the answer to whodunnit? Sometimes the author gives little clues along the way, but the best writers have very devious minds, and often these little hints are designed to lead readers off in the wrong direction. One version of this trope is when some chapters allow us to observe events through the eyes of the killer, but again, how reliable is the narrator? The Boy In The Headlights uses another method altogether, which intially involves a red herring the size of a Great White Shark, but to say more would spoil the fun.

The adage suggests that it is better to travel hopefully than to arrive, and I felt that the only weakness of this book was in the final resolution. The journey, however, is a brilliant roller-coaster, with great dialogue, convincing sub-plots and a real feeling of pace and urgency. Munch and Krüger are partners made in crime fiction heaven, and both the atmospheric geographical setting and the police procedural detail are impressive. The translation, by Charlotte Barslund, seems faultlessly fluent, but then I suppose we monoglots are in no position to judge. The Boy In The Headlights is published by Doubleday/Penguin and will on the shelves and available for download from 21stMarch.

Thanks to the ubiquitous Sky recording thingy and the wise folk at Talking Pictures TV, I have just watched the first episode of what was, back in the day, one of my all time favourite TV shows – Callan. With old TV and radio shows, they say it is a mistake to go back, as programmes are never as funny, or scary, or startling as when you first experienced them. In this case, “they” are seriously wrong.

Without being patronising to ‘Younger Viewers’, Callan (he was a David, but the christian name was rarely used) is a shadowy intelligence agent who is used – and that is the appropriate word – by an MI5 outfit, who send Callan off to do bad things in his country’s name. Callan is certainly a killer, as well as having all the criminal skills, but he has a conscience. Sometimes.

The very first episode, The Good Ones Are All Dead was broadcast on 8th July 1967. There had been a pilot episode under the Armchair Theatre banner, earlier that year, called A Magnum For Schneider. The creator of Callan was the prodigiously talented James Mitchell, who also wrote the long-running TV series When The Boat Comes In.

Callan is played by Edward Woodward (1930 – 2009), a very gifted actor who was also a fine singer. In popular acclaim he is probably best remembered for his roles as the doomed policeman in the cult film The Wicker Man, and as The Equaliser in the American TV series. His range is demonstrated by the fact that in the same year that Callan premiered, he played Guy Crouchback in a superb TV adaptation of Evelyn Waugh’s Sword of Honour trilogy.

Throughout the four series – plus a ‘reunion’ episode in 1981 – the plot elements remained simple but powerful. At the centre is Callan himself, embittered, solitary, deadly when crossed, but still with a sense of decency. His cynical and ruthless boss is Hunter, played by a succession of fine actors, including Ronald Radd and William Squire. Hunter’s word is law:

‘He has to die,’ said Hunter, ‘and you may be the man for the job.’
‘What’s he done?’
‘That is the second time you have asked that question. It isn’t your concern. Your business is execution and nothing else – not clouding your mind with reason and explanation. Do as you’re told and do it without question. Or get out now.’

Hunter’s on-the-payroll man was initially Toby Mears (played by a suave but deadly Anthony Valentine) whose snobbish dislike of David Callan is matched only by the knowledge that his rival is the more deadly of the pair. Mears was replaced by Patrick Mower, playing Cross, but essentially as the same character. Finally, and memorably, was the vital cameo role of Lonely, a grimy but resourceful low-life criminal. Played brilliantly by the Scottish actor Russell Hunter, Lonely (below) is a scared, smelly, stammering gofer for Callan. Guns, lock picks, information – whatever Callan wants, Lonely can usually get. There is a poignancy in the relationship between the pair, because Callan bullies Lonely unmercifully, but woe betide anyone else who threatens to harm the inadequate little man. 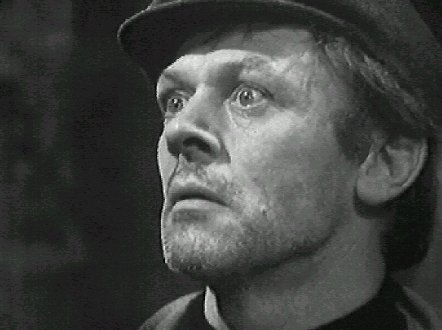 Callan was pure TV class from start to finish, from the memorably minimalist opening credits (the unforgettable swinging lightbulb and Girl In The Dark theme music by Jan Stoekart) via the eigmatic episode titles – The Death of Robert E Lee, The Little Bits and Pieces of Love, Nice People Die At Home – to the consistently excellent acting, the highlight of which is Woodward’s barely supressed rage and explosive anger at the world, and the role he is forced to play by the urbane but amoral Hunter.

If you have Sky or Freeview, it looks as though Callan will be on Talking Pictures TV, Monday, Tuesday, Thursday and Friday evenings at 9.00pm. Set your recorder to save the series – you won’t be sorry.

Books? Yes, I had better allude to them, as this is basically a crime book review site. As far as I know, they are ‘proper’ novels rather than being adapted from TV or film screenplays. They are all written by James Mitchell.