THE SENTENCE IS DEATH . . . Between the covers 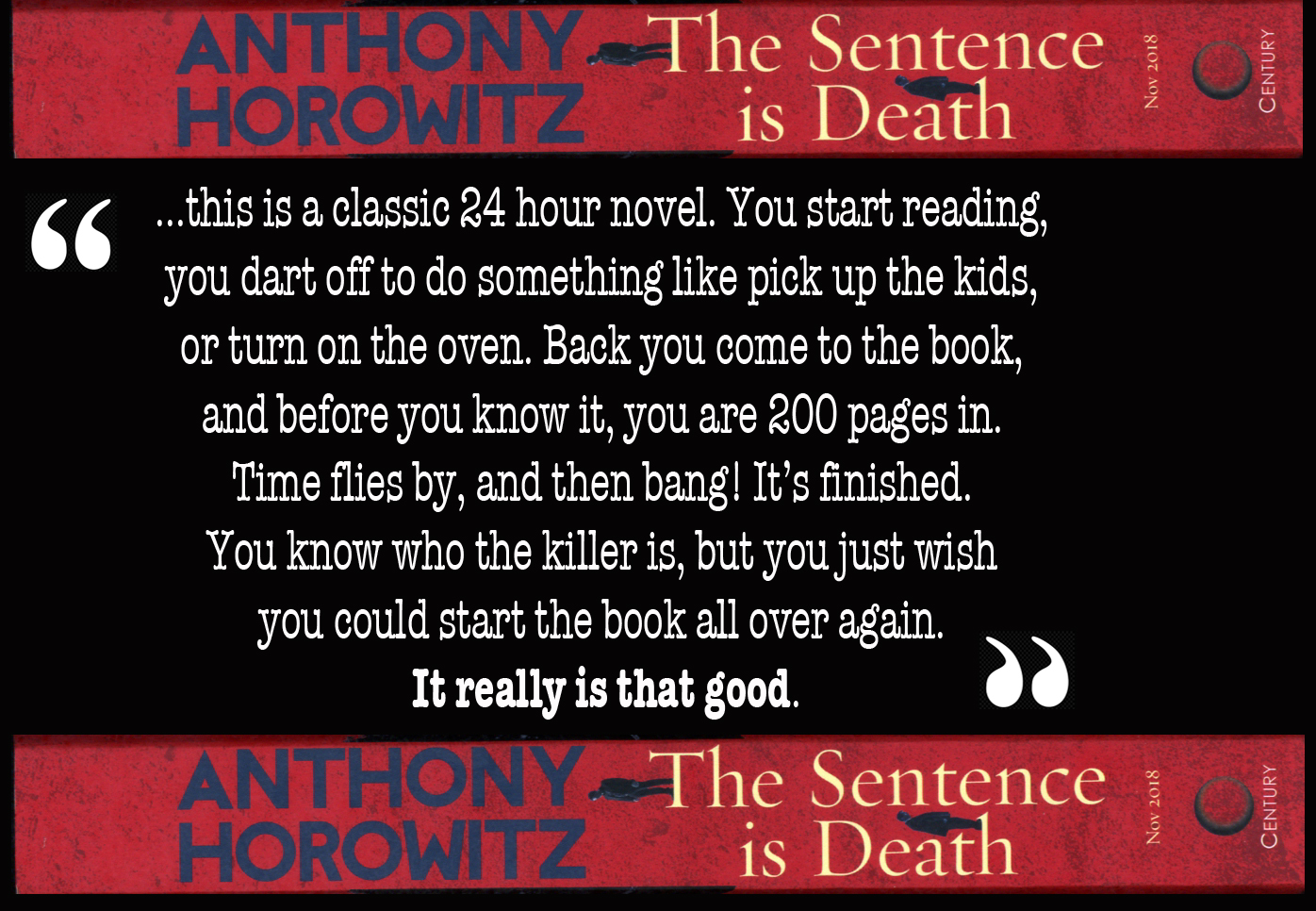 For those of you who are unfamiliar with the first book in this series, The Word Is Murder (and you can read my review here) you need to know that Anthony Horowitz has created a quite delightful literary conceit, and it is this: the story is narrated by Anthony Horowitz, as himself, and along the way we get to meet other real people in his life, such as his wife, his literary agent, and even some of the actors in his Foyle’s War series. The principal fictional character is an ex Met Police officer called Daniel Hawthorne, who was drummed out of the service for misconduct, but now operates as a private investigator, paid by the day by his former employers to work on difficult cases. Hawthorne has persuaded Horowitz to be Boswell to his Johnson and to write up the investigations as crime fiction.

Hawthorne is an intriguing character. He is probably somewhere on the autistic spectrum, lives alone, and has few social graces, His powers of deduction and observation are, however, remarkably sound. He immediately sees through the statement one witness has just given:

“The MG was right in front of us. Hawthorn pointed with the hand holding the cigarette.

‘There’s no way that’s just driven down from Essex of Suffolk, or anywhere near the coast.’
‘How do you know?’
‘The house he showed us in that photograph didn’t have a garage and there’s no way this car has been sitting by the seaside for three days. There’s no seagull shit. And there’s no dead insects on the windscreen either. Your telling me he’s driven a hundred miles down the A12 and he hasn’t hit a single midge or fly?’”

The case which has forced the police to seek Hawthorne’s help concerns a rich divorce lawyer who has been found battered to death in his luxurious house on the edge of London’s Hampstead Heath. For a decade or more Richard Pryce has been the go-to man for wealthy people who have had enough of their wives or husbands and want a divorce, but more particularly a divorce which will leave Pryce’s clients with as much of the family loot as possible. So, it is inevitable that while Pryce is adored by some, he is bitterly hated by others, and thus there are one or two obvious initial suspects. First among these is a rather aloof literary author whose determination to conflate America’s 1940s nuclear strategy with gender politics has won her many admirers of a certain sort. Her expensively produced collection of pretentiously profound haikus (is there any other kind?) has also made her much in demand at soirées in upmarket bookshops.

Then there is Pryce’s art dealer husband who, Hawthorne soon discovers, has been ‘playing away’ with the svelte young Iranian man who is front-of-house in his so, so discreet gallery. Has his affair been rumbled? Was Pryce about to cut him out of his will? The most unlikely connection, however, relates to Pryce’s younger self when he and two university buddies were enthusiastic cavers. Did a tragedy years earlier, 80 metres beneath the Yorkshire Dales, set in train a slow but remorseless search for revenge?

The abundance of questions will give away the fact that this is a tremendous whodunnit. Horowitz (right) tugs his forelock in the direction of the great masters of the genre and, while we don’t quite have the denouement in the library, we have a bewildering trail of red herrings before the dazzling final exposition. But there is more. Much, much more. Horowitz’s portrayal of himself is beautifully done. I have only once brushed shoulders with the gentleman at a publisher’s bash, so I don’t know if the self-effacing tone is accurate, but it is warm and convincing. More than once he finds himself the earnest but dull Watson to Hawthorne’s ridiculously clever Holmes.

Horowitz is, I suspect, too polite to be cruel to fellow writers, but he cannot resist a dig at earnest feminist authors who treat every moment of history as if it were a glaring example of man’s inhumanity to women. Trash fiction does not escape, either, and when his fictional self reads a page from the latest sub-Game of Thrones swords and sorcery shocker, it is horribly accurate. Above all, though, this is a classic 24 hour novel. You start reading, you dart off to do something like pick up the kids, or turn on the oven. Back you come to the book, and before you know it, you are 200 pages in. Time flies by, and then bang! It’s finished. You know who the killer is, but you just wish you could start the book all over again. It really is that good. Published by Century, The Sentence Is Death is out on 1st November.