Welcome to Brighton, England – where they do like to murder beside the seaside…Want to know what it’s like when a quiet romantic dinner ends in murder? Ace reporter Colin Crampton and his feisty girlfriend Shirley Goldsmith are tucking into their meal when Shirley discovers more blood on her rare steak than she’d expected.

And once again Colin is on the trail of a big story that can only end in more murder. Colin reckons he’s cracked the story when he uncovers a plot involving a sinister figure from the past. A Tango Academy seems to lie at the heart of the conspiracy.

But nothing is quite what it seems as Colin peels away the layers of the mystery. He tangles with a cast of memorable characters including a professor of witchcraft, the former commander of an army mobile latrine unit, and a tango instructor with two left feet. Join Colin and Shirley for another madcap mystery in Swinging Sixties’ Brighton, where the laughs are never far from the action. The Tango School Mystery is out now, and a full review will be posted on https://fullybooked2017.com very soon.

THE WOMAN in the WOODS by John Connolly

Charlie Parker – crime fiction’s most haunted private investigator – is back. As fans of the Portland, Maine detective know, death isn’t just part of the his natural human life cycle – it often assumes corporal form and walks alongside the living. The remains of a young woman are uncovered when a tree is uprooted, and when the body is examined, it is discovered that she had given birth shortly before her death. A Star of David has been carved in the bark of a tree, and Parker is hired by a Jewish lawyer to learn if the death has any anti-semitic overtones.

A mysterious – and  deadly – man named Quayle is also keen to learn more about the dead woman, but even more anxious to discover what became of the new-born child. Along with his companion – a creature named Mors who is truly from hell – Quayle’s path is destined to cross that of Parker. Charlie’s deadly pals Louis and Angel are in attendance, but Angel is there in spirit only, as he is recovering from an operation to remove a deadly tumour. Louis cannot comprehend why his partner has been chosen by the Cancer God, and his incomprehension turns to anger, which he vents on a young man who is unwise enough to have Confederate flags flying from his truck. The Woman In The Woods is published by Hodder & Stoughton and is out now.

OUR KIND OF CRUELTY by Araminta Hall

Obsession, deception, emotional perversion, sexual mania, psychological sadism…? Yes, indeed. Araminta Hall ticks all of those toxic boxes in her eagerly awaited new thriller, which tells the tale of Mike and Verity. At the very heart of their unusual relationship is a game of seduction and danger, but with Verity’s impending marriage, the game has to end. At least it would in any normal relationship, but of all the adjectives that could be applied to what Mike and Verity get up to, the word ‘normal’ comes way, way, way down the list. So, what happens? Death is what has to happen, but the Grim Reaper seldom walks alone. 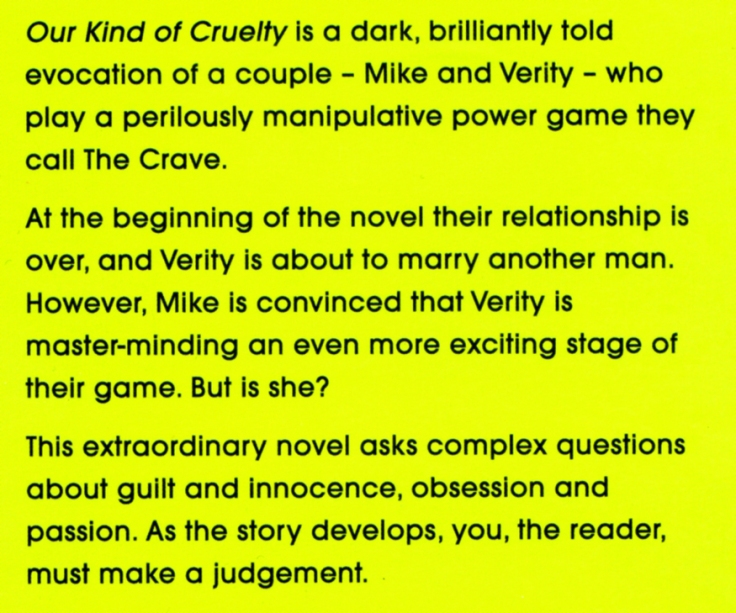 Our Kind of Cruelty is published by Century; it will be available as a Kindle on 19th April, in hardback on 3rd may, and in January 2019 as a paperback.

Araminta Hall, John Connolly, Our Kind Of Cruelty, Peter Bartram, The Tango School Mystery, The Woman In The Woods