THE CONFESSION . . . Between the covers 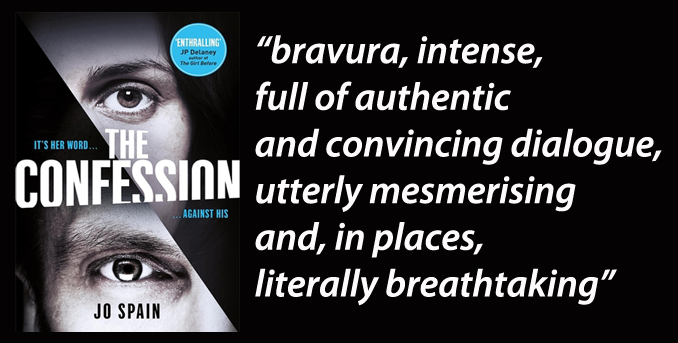 Here’s a challenge for you. A challenge for writers, and for those who like to write about writing. Begin your novel like this. Time? The present day. Scene? A comfortable room in an Irish house. Characters? A man and woman watching television, and an unknown intruder. Action? The intruder hacks the man to death in front of his horrified wife. Placement in book? The opening pages. Now, write a compelling and hypnotic novel of 400 pages which follows this dramatic beginning, and keep your readers hooked until the last paragraph.

Jo Spain not only takes on the challenge, but she meets it head on and completes it with subsequent pages of The Confession which manage to be, as night follows day, bravura, intense, full of authentic and convincing dialogue, utterly mesmerising and, in places, literally breathtaking. A countryman of Spain’s began his most famous novel with “Stately, plump Buck Mulligan came from the stairhead, bearing a bowl of lather on which a mirror and a razor lay crossed.” She counters with:

“It’s the first spray of my husband’s blood hitting the television screen that will haunt me in the weeks to come – a perfect diagonal splash, each droplet descending like a vivid red tear.”

Now that is as fierce an opening paragraph as you will ever read. The speaker is Julie McNamara. The victim – of a perfectly timed swing with a golf club – is husband Harry, a financier who has recently fallen from grace as his empire took a huge hit in the 2008 financial crash. He is still formidably rich by most people’s standards, but his reputation as some kind of investment Midas has been destroyed. We hear the story of his rise and fall through Julie’s voice. She says, of the beginning of their love affair:

“Young, innocent, hopeful, in love. That was us at the beginning of our fairytale. But here’s the thing about fairytales. Sometimes they’re darker than you can ever imagine.”

Jo Spain continues to defy crime fiction convention by eschewing the standard police procedural manhunt. Instead, the killer of Harry McNamara turns himself in at the nearest police station in his blood-stained clothes and announces himself as John Paul Carney. At this point, Spain introduces us to a very distinctive member of An Garda Síochána, Detective Sergeant Alice Moody:

“Gallagher’s senior detective sergeant arrived at the top of the stairs, sweat patches already forming under her armpits from the three flights, her thin mousy brown hair gleaming from the perspiration emanating from her scalp.Every time that woman took the stairs she gave a convincing performance of somebody on the verge of a heart attack.”

So DS Moody is not cut out to be a TV producer’s idea of a marketable sharp, charismatic – and stunningly sexy – detective. But she is bright. Very, very bright, as we are to discover.

The Confession unfolds like a beautiful but deadly flower opening its petals, one by one. Our narrators are the widowed Julie, Alice Moody, and JP Carney himself. A phrase here and there, a paragraph or two, an apparent revelation, and we think we know why JP Carney has bludgeoned the living daylights out of Harry McNamara. But this is Jo Spain’s skill. A page at a time, she weaves her spell and points us in the direction of the truth. Except we come to a dead end. A literary rockfall. An emphatic no-entry sign.

Of course, we get there in the end, and understand why JP Carney has exacted such an emphatic revenge on the handsome, charismatic and plausible Harry McNamara, but sometimes book reviews have to stop dead in their tracks, and say, “Trust me, this is a brilliant novel, but to tell you any more would be little short of criminal.” Yes, The Confession is a brilliant novel. Yes, I read it through in one sitting, deep into the early hours of a winter morning. Yes, I am a fan of Jo Spain (right). Yes, if you don’t get hold of your own copy of this, you will receive scant sympathy from me. The Confession is published by Quercus, and will be on sale as a Kindle from 11th January, and as a hardback from 25th January. Check online buying choices here.

For reviews of earlier Jo Spain novels, click on the titles below.