SLEEPING BEAUTIES … Between the covers

In the beautiful valley of Glendalough there are ancient stones, shades and spirits of the holy men who prayed in the monastery – and in the cemetery, lichen-covered headstones of generations of Byrnes, Cullens, Farrells, Nolans, Waldrons – all, both monks and villagers, at peace now. But the body of a young woman has been found. Interred without sacrament, beyond the gaze of those who would mourn her. In a shallow grave on a hillside, wearing the clothes she disappeared in. It is all that remains of Una Dolan, a twenty four year-old lass from Waterford. Last seen April 29th, 2011.

Inspector Tom Reynolds, of Dublin’s An Garda Síochána, is called to the scene on a blisteringly hot summer afternoon. The police tapes are strung out, a tent is put over the body, the hundreds of tourists shepherded away beyond gawping distance, but Una does not lie alone in her woodland grave:

“The Inspector frowned and examined the earth under the trees. As he scanned the glade, his stomach lurched.
One, two, three, four. Five, counting the mound of earth disturbed under the tent.
Tom counted five separate patches where the same delicate blue flower was blooming. And then he saw it …
Somebody had cleared the earth of its natural layer and sown their own flowers.
In five places.
Five graves.”

Reynolds and his team are already searching for another missing woman, Fiona Holland, but as the forensic experts do their macabre job and try to identify the five Glendalough women, Fiona’s name doesn’t seem to be among them. Instead, the unresolved disappearances of the last few years are narrowed down in a business-like but brutal fashion. 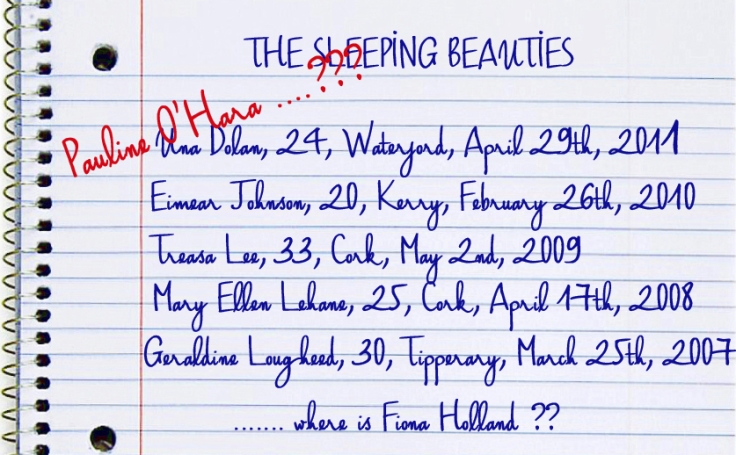 While the guards go about the melancholy business of dashing the hopes of the girls’ relatives, Tom Reynolds has more than one disagreeable offering on his plate. One unpalatable mouthful is his immediate superior. The very model of a modern career policeman, Joe Kennedy sits in the ergonomically designed executive chair which Tom himself was offered, but turned down because the job would have distanced him from all the aspects of policing which energise and inspire him. Kennedy is, to put it bluntly, a prick. Worse, far worse, is that Sean McGuiness, Tom’s previous boss and mentor, is facing the retirement from hell as he tries to cope with the regressive dementia of his wife, June. Tom and his wife Louise feel helpless as their old friends face the worse crisis of their lives.

Tom Reynolds is compassionate and perceptive, but he is also driven by his own desire to see justice done. His investigative team are sympathetically drawn, and the sense of police teamwork is palpable. The guards must combat the possibility of police corruption and deal with the pent-up anger of frustrated and grieving families but, just as the killer appears to be cornered, caught and convicted, the gut-wrenching possibility arises that the case may not be ready for filing in the “solved” drawer.

Jo Spain writes like an angel. No fuss. No bother. No pretension. The narrative flows as smoothly as a glass of Old Bushmills slips down the appreciative throat, and she has us looking this way and that as we stand beside Tom Reynolds as he searches for the killer. This is, on one level, a police procedural, but Jo Spain doesn’t let methodology bog the story down. We know that she knows how the police operate, and that is more than enough. Her rural Ireland is beautifully described without unnecessary frills and furbelows, and she gives us as perceptive a story of the heights and depths of human behaviour as you will read all year. If you have come a little late to the Tom Reynolds party, the first episode of his career is With Our Blessing, followed by Beneath The Surface.