DANGEROUS CROSSING … Between the covers 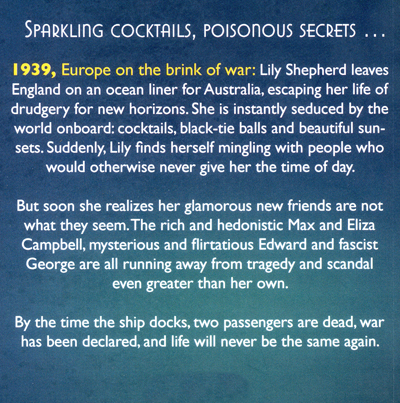 It is the summer of 1939. In Germany, the bitter ashes which have been smouldering for two decades since the punitive reparations after Versailles have been fanned into flames, and the fire is set to spread across Europe. As Hitler prepares to march into Poland, in Britain the world carries on as normal, although few would know that this would be the last summer of peace for more than six years.

In the dock of the Essex port of Tilbury stands the ocean liner Orontes. The crowds on the quayside watch and wave as their loved ones board the ship, which is bound for Australia. One of the passengers is Lily Shepherd, a quiet but pretty young woman who has had enough of waitressing at a Lyons Corner House in London, and has signed up with a scheme which will take her to Australia to work as a domestic servant.

Rachel Rhys begins the book with the closing scene. The Orontes has docked in Sydney, but before the passengers disembark, we see police escorting a woman from the ship. It is obvious she has committed some grievous crime, but her identity is not revealed and so the book becomes less of a whodunnit? than whowilldoit? Rhys carefully follows the conventions of mystery stories which take place in the enclosed spaces of ships and long distance trains, and she has assembled an excellent cast of characters. Again sticking to the tried and trusted formula, Rhys describes how most of the characters are running away from something – or someone.

Edward Fletcher and his sister Helena are travelling to Australia for the good of Edward’s health. He is suffering from tuberculosis. Months in a sanatorium have saved his life, but only the Australian climate will guarantee that it will be a long one. George Price is an embittered young man who has been sent by his father to work on a relative’s farm in New Zealand. He makes no bones about the fact that he sees Hitler’s rise to power as the best thing which could have happened to Germany in particular, and Continental Europe in general.

The typically staid and reserved social dynamic between this little group, who all share Lily’s dining table, is shattered by the arrival of Max and Eliza Campbell, an American couple who escape the stifling atmosphere of their First Class lounge hoping to find a little fun slumming it in Tourist Class. On the very fringe of things, but growing ever more dependent on Lily’s friendship, is Maria Katz, a Jewish girl who has managed to escape impending disaster in her native Austria. Her parents, however, have not been so fortunate.

Lily is ‘adopted’ by the Campbells but the couple have very different motives. As well as being dazzled by the louche and extrovert Americans, Lily begins to fall in love with the shy and hesitant Edward. As she does so we learn, little by little, about the tragic consequences of her only previous love affair. 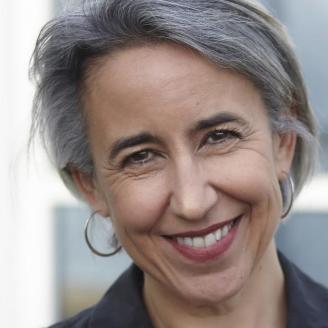 Rachel Rhys (right) is nothing if not a skilled storyteller, but we should not be surprised as Dangerous Crossing is no debut novel. Under her real name, Tamar Cohen, she has written a string of best selling psychological thrillers. So, as the Orontes proceeds on its stately voyage to Australia, we share Lily Shepherd’s mixture of discomfort and amazement as she goes onshore to visit such exotic places as Pompeii, Cairo and Colombo. Rather after the fashion of a modern day Patricia Highsmith, Rhys has the main players gradually revealing their secrets to one another. The rack turns, one ratchet at a time, but so elegantly and cleverly are things concealed that the crime, when it does happen, is completely shocking and unexpected.

Dangerous Crossing is published by Doubleday and is available here.