This new book reminds me that gender choice is very much a hot topic these days on and off social media, but in ‘the good old days’ people weren’t blessed with Facebook’s bewildering 71 gender options, which seem to have expanded rather after the fashion of satellite TV channels, minus the remote control, obviously. Gender flipping was usually confined to the lyrics of folk songs where young women pretended to be either cabin boys or army drummers so that they could stay close to their chosen young man as he sailed – or marched – off to do battle with Johnny Foreigner. 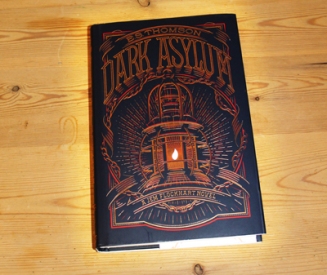 The main character of ES Thomson’s Dark Asylum – the second in a series of Victorian crime novels – is Jem Flockhart. Jem is not who he seems to be. In fact, he isn’t ‘he’ at all. Jem is actually a young lady who is forced to transform herself into a man in order to be accepted in the medical profession. She first made an appearance in Beloved Poison (2016) and now she returns to investigate the murder of the principal physician at an insane asylum. Among all the usual tropes of Victorian London, including grim slum ‘rookeries’, brothels, violent convicts and brothels that cater for every depravity, Jem and her partner in solving crime, Will Quartermain search for the person who killed Dr Rutherford – after cutting off his ears and sewing his eyes and lips tight shut.

As I hope you can see from the images, Dark Asylum is handsomely printed, and if the novel is as gripping as it is well presented and designed, then it should be an excellent read. Look out for an in depth review on Fully Booked in the near future. Published by Constable/Little, Brown, it is out on 2nd March.