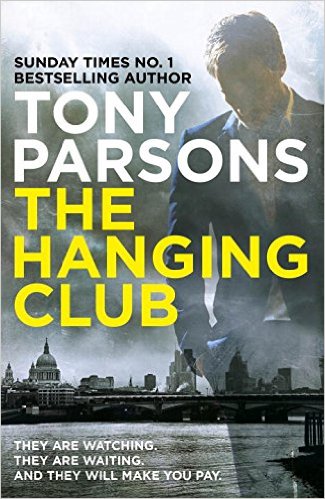 Tony Parsons has created an intriguing character in the shape of DC Max Wolfe, and Thursday sees the paperback release of his London based thriller, The Hanging Club.

When the video of an apparent execution is posted online, DC Max Wolfe and officers of the Major Incident Team, along with thousands of online viewers, watch in horror as the kitchen stool is kicked out from under the feet of a Pakistani taxi driver, and he chokes to death, swinging by an improvised noose.

The random murder of an innocent man? Not exactly. Mahmud Irani was part of a gang of men who groomed, raped and abused a number of white teenage girls. He served a jail term which many believe was too short, considering his crimes.

Another video surfaces. A handful of masked executioners use the same location, apparently deep underground somewhere. The hanged man? A young city trader who killed a boy cyclist, served a few months in jail, and then returned to his job, which had thoughtfully been kept open for him.

Wolfe and the MIT realise that they have a vigilante group on their hands, and their search for the culprit takes them to some of London’s hidden places, including the eventual location of the hangings. A little research on Google reveals that the surprise underground setting still actually exists, and is in remarkable good state.

The Hanging Club is out on Thursday 23rd February, published by Arrow. Watch out for our forthcoming review of Die Last, the new Max Wolfe story, coming soon.