THE FULLY BOOKED BEST BOOK OF 2016

We already have selections for Best Dialogue, Best Historical Novel, and Best Psychological Thriller. Next up came the awards for Best Non-UK Novel, Best Police Procedural and Best PI Novel. Now, though, it’s drum roll time, and this is the book which, for me, was the outstanding publication of 2016.

Strange Tide by Christopher Fowler
The Peculiar Crimes Unit is a kind of lost property facility for London’s Metropolitan Police. Orphan crimes, unsolved murders, unexplained disappearances – in short, investigations which would cost the cash-strapped Met Police valuable man hours are left on the doorstep of the PCU. Its two senior detectives, Arthur Bryant and John May are impossibly ancient but have an irreplaceable knowledge of London’s unique criminal history. The odd couple, particularly the apparently shambolic Bryant, have an almost visceral connection to the countless misdeeds committed on the capital’s ancient streets and lanes. 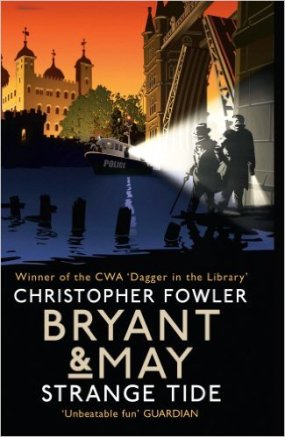 But all is not well. Arthur Bryant is physically sound enough, but his encyclopaedic mind is starting to betray him. He is suffering episodes of serious dislocation. He causes havoc in what he thinks is an academic library when he’s actually in the soft furnishings department of British Home Stores. While soaking up the ambiance of a Thames-side crime scene, all he can sense are the sights, sounds and smells of the early 20th century docks. John May and the more sprightly members of the PCU have to keep Arthur virtually under lock and key, for his own protection.

While trying to stop Arthur from wandering off and doing himself a mischief, the PCU team are investigating a bizarre death. A disturbed young woman has been found – drowned – chained to a concrete block on what had been an artificial Edwardian beach on a neglected section of the riverbank. She was several months pregnant, but her insouciant chancer of a boyfriend is innocent of both her demise and her impregnation. Why was there only one set of footprints leading towards the corpse?

As well as being among Britain’s best current crime writers, Fowler also carries the torch passed on by the great English humourists. With his gentle, quirky but needle sharp observations of the sheer daftness of the way we live now, he links hands with such writers as George and Weedon Grossmith, JB ‘Beachcomber’ Morton,  John Betjeman, Israel Zangwill and Colin Watson.

Behind the gags, the knowing cultural references, the ingenious plotting and the clever characterisations, we have Fowler’s unique take on London itself. No living writer save, perhaps, in their different ways, Peter Ackroyd and Iain Sinclair, knows London quite like Christopher Fowler. In other books in the series he has turned his expert eye on the theatres, the city’s lost rivers, and its medieval legends. The star of the show in Strange Tide is the River Thames itself. The crime is eventually solved, Arthur’s malaise is mostly cured, but the powerful river remains the city’s lifeblood. In a telling paragraph, Fowler reveals the deep, dark, blue centre of what he is about.

“…the metropolis is ultimately changeless. Its people remain the same because London is a state of mind. They do not make London. London makes them.”

Strange Tide is published by Doubleday.