TRUTH WILL OUT … Between the covers 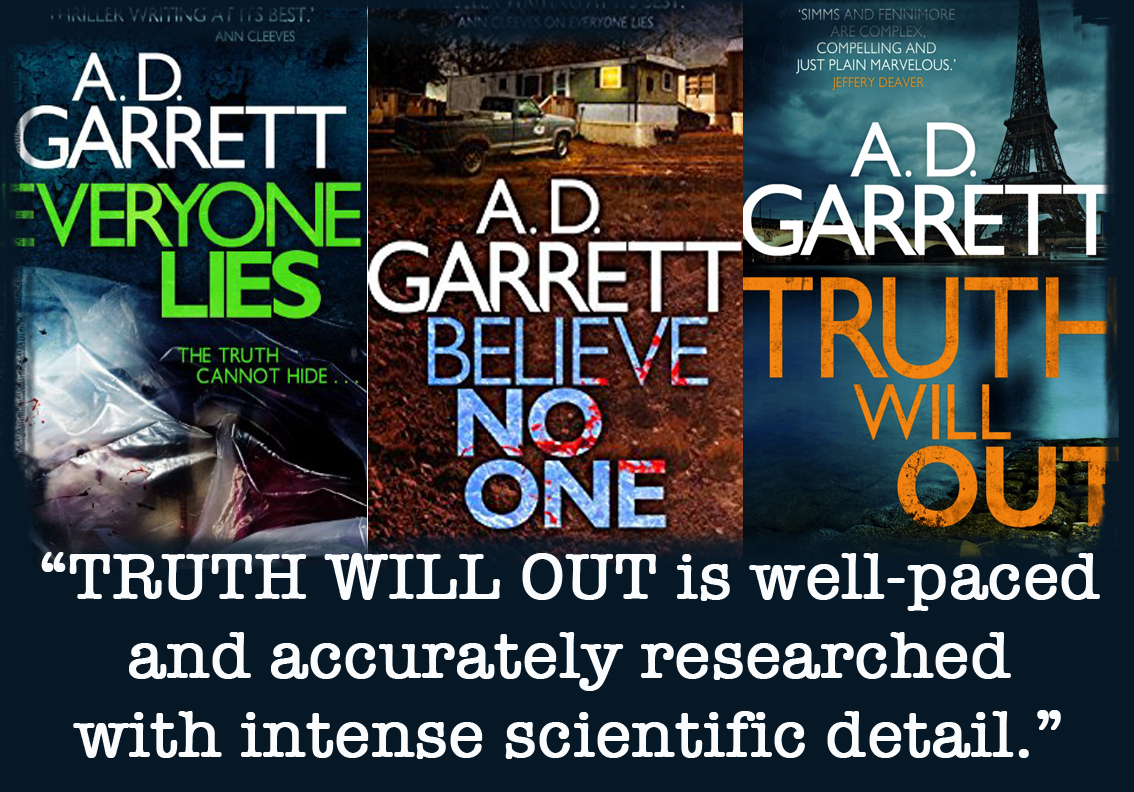 Nick Fennimore is a forensic psychologist, and a Professor at the University of Aberdeen. His past gives him a painful and heartfelt stake in the hunt for a serial killer, as his own wife and child were snatched. Both are now lost to him; wife Rachel, because her body was found shortly after the abduction., and daughter Suzie – well, she is just lost. Neither sight nor sound of her has been sensed in the intervening years, but Fennimore clutches at the straw of her still being alive, and he feverishly scans his own personal CCTV footage of the Paris streets and boulevards in the hope of catching a glimpse of her.

Fennimore has an uneasy relationship with DI Kate Simms, a senior police officer now working in Manchester. They too have a past, but Kate is unhappily married to Keiron, an ambitious schoolteacher who seems more concerned with his own professional advancement than keeping their marriage alive. Keiron may have a justifiable grievance, as Kate has only just returned from a high profile secondment to America, while he has been left to keep the home fires burning, and their two children fed and watered.

Julia Myers and her six year-old daughter Lauren have been taken, perhaps by the same killer who inflicted such trauma on Fennimore. Just as in the Fennimore abduction, the mother – Julia – turns up dead, but where is the daughter? We have the occasional chapter narrated in Lauren’s voice, and Garrett captures her intensity, bafflement and frustration perfectly.

Fennimore has been pursued by a persistent Essex reporter, Carl Lazko, who wants to make a headline-grabbing story out of the wreckage of Fennimore’s personal life, in addition to mounting a campaign to prove that a man called Graham Mitchell is innocent of a murder which has no connection with Fennimore but has all the hallmarks of the academic’s family tragedy.

Josh Brown is a research assistant to Fennimore and as part of his campaign to get the academic on-side, Lazko reveals that Josh is on a witness protection programme and is a member of a notorious Essex crime family. Josh has turned Queen’s Evidence, thus indicting several close family members, hence his new life and new identity. When they appear, in the later part of the book, Josh’s family – his brothers, no less – are chillingly depicted as murderous and callous hooligans. As a Briton, I do sometimes ask the question, “What is it about Essex?” That I fully expected the vindictive brothers to be thoroughly odious probably tells its own story. As I write, I can tell you that there is currently a pressure group working hard to force the removal of the term ‘Essex Girl’ from a popular and inclusive dictionary.

A.D. Garrett is the pseudonym for prize-winning novelist Margaret Murphy (above left), working in consultation with policing and forensics expert, Helen Pepper (above right). I found their latest novel well-paced and accurately researched with intense scientific detail, as one would expect from a novel co-authored by a scientist. My only criticism is that the abduction case is eventually solved in a very dramatic fashion, and this was a master-class in how an author should bring a plot to a thrilling – and bloodstained – conclusion. But then, just as we – that’s you and me, the readers – are calming down after a thrilling denouement, the authors decided to wrap up Fennimore’s own personal obsession – the whereabouts of his daughter. This is done at 110 mph, in very few pages, and I felt that it could easily have been left to another day and another novel, to allow its dramatic potential to be fully exploited.

The two previous books in the series are Everyone Lies (2013) and Believe No One (2014). Truth Will Out will be available from 3rd November in hardback and Kindle, with a paperback version promised for early 2017. The novels are published by Corsair, which is an imprint of the Little Brown Group.