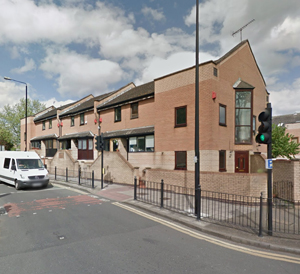 REGGIE AND RONNIE KRAY have been the subject of almost as many books, documentaries and dramas as their 19th century near-neighbour Jack the Ripper. The East End that he – whoever he was – knew has changed almost beyond recognition. The Bethnal Green of the Krays is heading in the same direction, but a few landmarks remain unscathed. They were born out in Hoxton in October 1933, Reggie being the older by ten minutes. The family moved into Bethnal Green in 1938, and they lived at 178 Vallance Road. That house no longer stands, modern houses having been built on the site (left)

Their life of crime is well documented elsewhere, but this brief guide focuses on the two ‘hands-on’ murders the twins committed. How many other deaths they were indirectly responsible for is a matter for others to catalogue.

Glib histories sometimes say that the Krays “ruled London’. That is totally inaccurate. Yes, they were very powerful within their own domain, and were well connected with several high profile personalities. But south of the river, the Richardson brothers, of whom more later, held sway. Generally, the two gangs acknowledged each other’s territory, if only for the reason that open warfare would benefit no-one. London is a big place, and there were plenty of pickings to be shared. Occasionally, though, personalities clashed, and it was one such example of personal antipathy which led to the first murder. 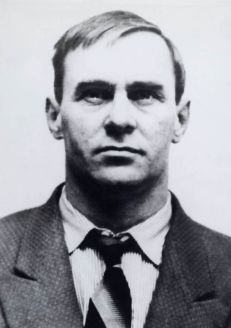 George Cornell (right) had known the twins from childhood. Their careers had developed more or less on similar lines, except that Cornell became the enforcer for the Richardsons. On 7th March 1966 there was a confused shoot-out at a club in Catford. Members of the Kray gang and the Richardsons gang were involved. At some point, George Cornell had been heard to refer to Ronnie Kray as a “fat poof.” That might seem unkind, but was not totally inaccurate. Ronnie was certainly plumper than his lean and hungry twin, and his liking for handsome boys was well known. 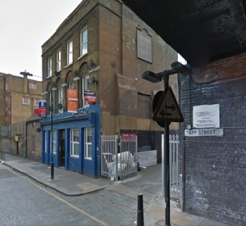 On the evening of 9th March, Cornell and an associate were unwise enough to call in for a drink at a The Blind Beggar pub on Whitechapel Road, very much in Kray territory. Some thoughtful soul telephoned Ronnie Kray, who was drinking in a nearby pub, The Lion in Tapp Street (left). Ronnie, pausing only to collect a handgun made straight for the Blind Beggar, strode in, and shot George Cornell in the head at close range. His death was almost instantaneous. Needless to say, no-one else in the pub had seen anything. Pictured below are a post mortem photograph of Cornell, and the bloodstained floor of The Blind Beggar. Below that is the fatal pub, then and now. 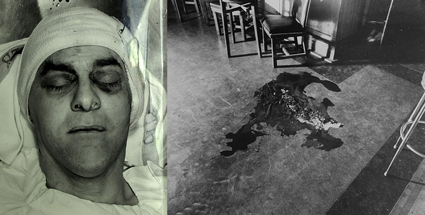 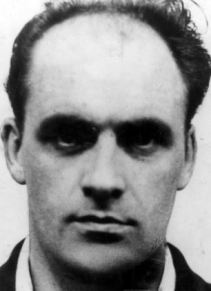 Folklore has it that now that Ronnie had ‘done the big one’, there was pressure on Reggie to match his twin’s achievement. The chance was over a year in coming. Jack McVitie (right) was a drug addicted criminal enforcer who worked, on and off, for the Krays. His nickname ‘The Hat’ was because he was embarrassed about his thinning hair, and always wore a trademark trilby. McVitie had taken £500 from the Krays to kill someone, had botched the job, but kept the money. He had also, unwisely,been heard to bad-mouth the twins. 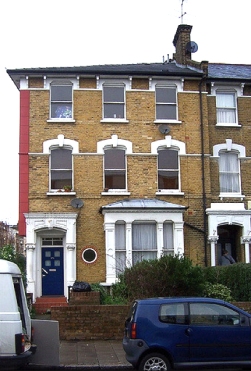 On the night of 29th October 1967, McVitie was lured to a basement flat in Evering Road, Stoke Newington,(left) on the pretext of a party. There, he was met by Reggie Kray and other members of the firm. Kray’s attempt to shoot McVitie misfired – literally – and instead, he stabbed McVitie repeatedly with a carving knife. McVitie’s body was never found, and the stories about his eventual resting place range from his being fed to the fishes of the Sussex coast to being buried incognito in a Gravesend cemetery.

The murders were to be the undoing of the twins, but it wasn’t until May 1968 that Scotland Yard had enough evidence to arrest them. Once they were remanded behind bars, hundreds of witnesses who had hitherto imitated The Three Wise Monkeys, were suddenly available to give evidence. Reggie and Ronnie were sentenced to 30 years in prison. Ronnie died in a Berkshire hospital in March 1995, while Reggie was released on compassionate grounds in August 2000. He died of cancer in October of that year. 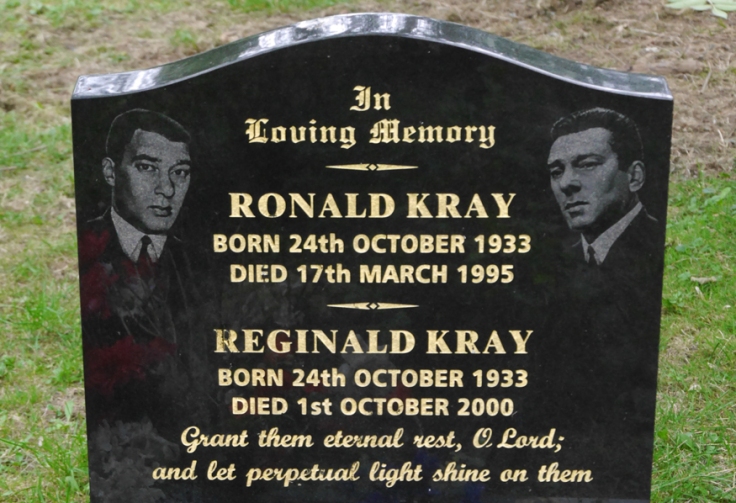