WHEN YOU ARE OLD AND GREY – if not full of sleep, there will be times when images from youthful days reappear in the mind’s eye. When I was young, there was no internet, little television and, in terms of images, newspapers were King. Mostly, it is the faces of notorious criminals that I remember. Gunther Podola, long forgotten now, but at the time a notorious cop-killer; Harry Roberts, sneering out at us from the newsprint, while he evaded capture for so long; the baleful peroxide glare of Myra Hindley; the troubled but defiant ‘Jack The Lad’ face of James Hanratty. The one face, and figure, that entranced me most, however was the earliest – the sharp, brassy, night club features of Ruth Ellis. 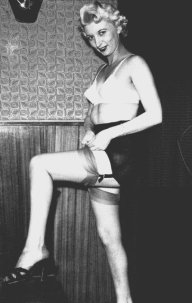 Ellis chose her path in adult life based on her natural vivacity and an appreciation that she could earn more from nude modelling and ‘clipping’ punters in a night club than she could by working in the typing pool or in a factory. As a child her home life had been chaotic, so she had developed the necessary survival skills to make her own way in the austere world of post-war Britain.

Ellis became manager of her own club, The Little Club, and it seems that the clientele included a number of ‘Tim-Nice-But-Dim’ gentlemen, products of minor public schools, but with aspirations way in excess of their capabilities. One such was David Blakely although, to be fair, his wealthy background meant he had attended (and failed at) one of the country’s top schools, Shrewsbury. His passion was racing cars, and although he would never come close to emulating the feats of his friend, Mike Hawthorne, his death could be viewed as equally tragic as that of Hawthorne, four years later.

Ellis and Blakely became lovers, if not partners, but neither was faithful to the other. Blakely was physically violent; Ellis was violently jealous. On 10th April, 1955 – Easter Sunday – Ellis waylaid Blakely as he left a Hampstead pub, the Magdala. She shot him dead with a .38 Smith and Wesson revolver. Despite the day, there was to be no resurrection.

Ellis was arrested at the scene and made no attempt to deny her crime. The trial was something of a formality, and in 1955, the death sentence was mandatory for premeditated murder. Despite various attempts to have the sentence revoked, Ruth Ellis was hanged on Wednesday 13th July, 1955. The hangman was Albert Pierrepoint. (below, a scene from the film Pierrepoint: The Last Hangman, with Timothy Spall and Mary Stockley)