THE NIGHT HAWKS . . . Between the covers 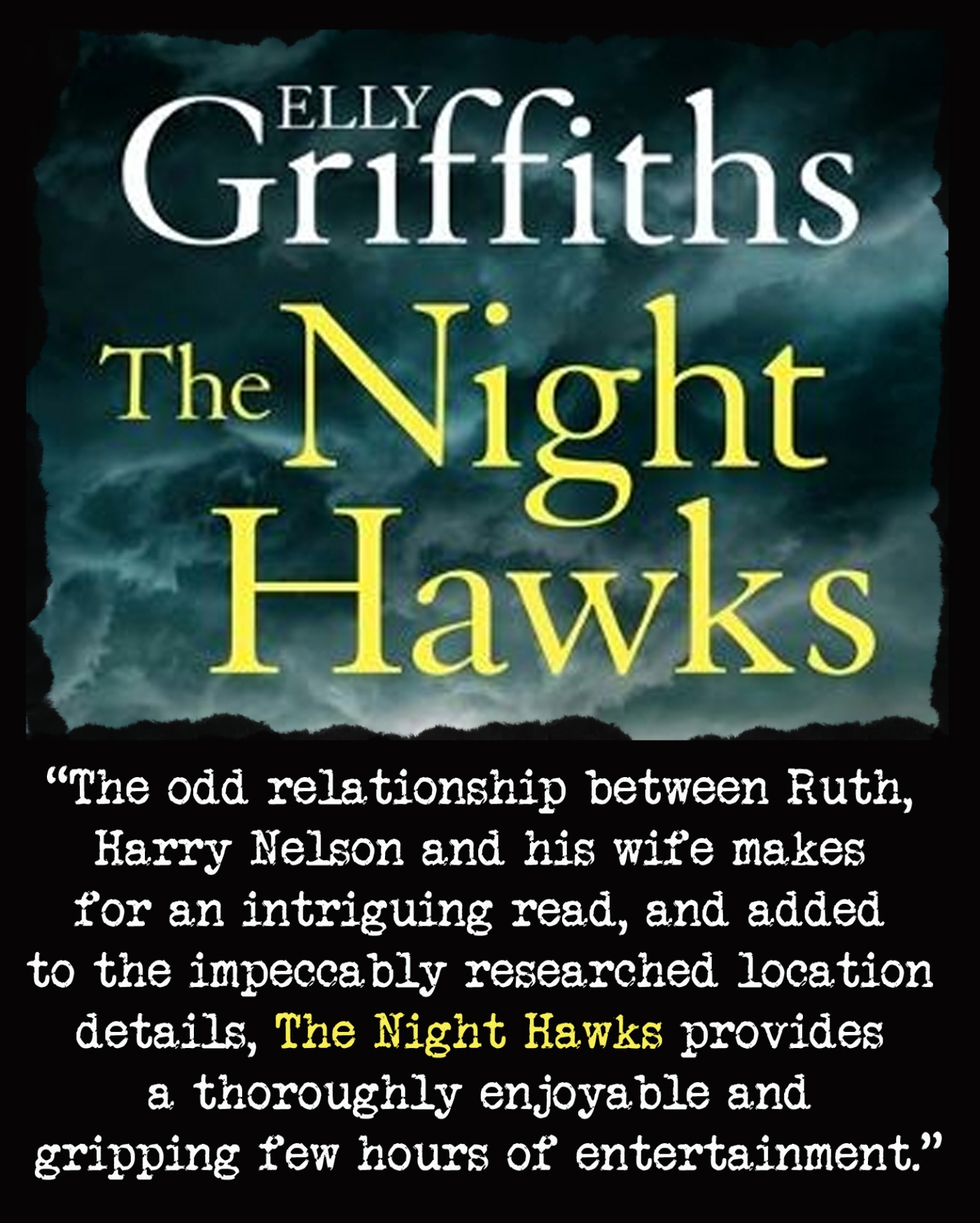 Elly Griffiths, (left) whose real name is Domenica de Rosa, has created an endearing heroine in the person of Ruth Galloway, an English archaeologist who, over the course of a dozen novels, has managed to find herself at the centre of murder mysteries where the corpses are considerably more recent than the ones she normally excavates. She is a senior lecturer at the fictional University of North Norfolk, and the novels are set in and around the north and west of Norfolk. Griffiths uses real locations like King’s Lynn, Blakeney and Sheringham, and has also constructed a reliably entertaining cast of supporting players, principally Ruth’s once-upon-a-time lover, a refreshingly old fashioned married police detective called Harry Nelson. They have a child, Kate, who lives with Ruth, while Harry remains more-or-less happily married to Michelle, with whom he also has children.

In the thirteenth book in the series, The Night Hawks, we have the characters who long time readers of the series will recognise, including the middle aged druid who calls himself Cathbad. His real name is Michael Malone, but he can usually be relied upon to bring to bring a touch of the supernatural – imagined or otherwise – to the proceedings. The Night Hawks in this tale aren’t remotely sinister, despite their name. They are group of men whose hobby is traversing the ancient Norfolk landscape with their metal detectors, searching for buried artifacts. They operate at night, because it is quieter and they are less likely to be disturbed.

They get the story started with a classic Elly Griffiths trope – the finding of a Bronze Age hoard, including an ancient skeleton, alongside a body that is much more recently deceased. While the older gentleman can wait his turn to be studied and catalogued, the young man’s body is whisked off to King’s Lynn for the attention of the police pathologist. 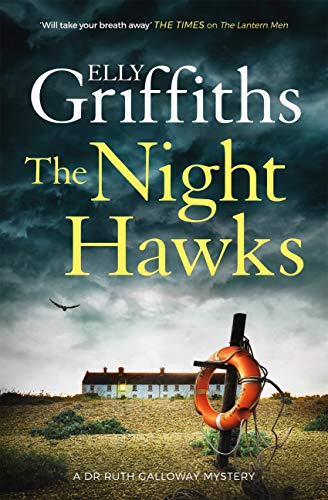 Shortly after the grim discovery, the police are called to a remote farmhouse a few miles inland, where there are reports of gunshots being heard. This time, there is no doubt about the identity or the cause of death of two dead people found inside Black Dog Farmhouse. Dr Douglas Noakes and his wife Linda are dead from gunshot wounds, and it appears to be a clear case of murder-suicide. This clear cut diagnosis becomes rather more tenuous when questions are raised about firearms technicalities, despite an apparent suicide note being found.

The plot becomes pleasantly complicated from this point on. The late Dr and Mrs Noakes had two children, from whom they had become estranged, but was the separation bitter enough to provoke murder? Noakes was not a GP, but a research scientist, and it seems that he had been working with a Cambridge lab developing vaccines. Was this why one of the rooms at Black Dog Farmhouse was kitted out like a doctor’s surgery, complete with bed? The dead young man – the twentieth century one – is eventually identified as Jem Taylor, a 25 year-old from Cromer, who had only recently been released from prison.

There is another murder. This time the victim is a member of The Night Hawks, a retired teacher with connections to several of the people in the story. He has been battered over the head with a lump of rock, and his death further complicates matters.

Elly Griffiths has great fun by introducing some ‘spookery’ by way of a local legend – that of Black Shuck. Tales of a ghostly hellhound are spread far and wide through English folklore, and this Norfolk version is equally menacing. Like all literary amateur sleuths, Ruth Galloway’s involvement with active police investigations is pretty implausible, but delightfully so. The odd relationship between Ruth, Harry Nelson and his wife makes for an intriguing read, and added to the impeccably researched location details, The Night Hawks provides a thoroughly enjoyable and gripping few hours of entertainment. The book is published by Quercus and will be out on 4th February.

JIM KELLY: A Landscape of Secrets

Jim Kelly’s brooding and atmospheric crime novels are set in the eastern counties of Norfolk and Cambridgeshire. I am a huge admirer of his books, and you can click the link below to watch a short video which tries to distill the essence of his work into a brief juxtaposition of images and music.

JIM KELLY: A Landscape of Secrets

THE KILLING OF JOHN AUGER

This is a tale of brutality – and total incompetence. An elderly man is battered to death, and his killers escape with a safe containing small change. Get the full story by clicking the podcast link.

THE KILLING OF JOHN AUGER

THE SEAWEED THAT STARTED A WAR

Here on the coast of The Wash we can, if we wish, still measure the seasons by produce. I say “if we wish”, because supermarkets have no seasons – everything is available all the year round. But in the old fashioned world of buying food when it is fresh and local, the year has its own rhythm. Early summer gives us asparagus, followed by strawberries. In autumn and winter Brancaster mussels and native oysters are delicious, but for me, the true treasure of the summer months is samphire. This plant of the coastal marshes, Crithmum maritimum, allegedly gets its name from a corruption of the French “St Pierre”, but whatever its etymology, it is utterly delicious. Lightly boiled or steamed, it is best eaten with the fingers. Running the stems through your teeth to strip off the flesh is a completely sybaritic sensation. Local folk love it with vinegar, but with butter and coarsely ground pepper it is little short of heavenly.

But hold on, you say, this is mostly a crime fiction site. What’s with the gourmet stuff? Bear with me for a moment longer. Let’s look at the price. As you can see from the photos, it’s £5.99 for a kilo here in the market. Sadly, this will be the last until June or July next year, but no matter. A quick search on the internet reveals that an online Cornish fishmonger will provide some for £16.90 a kilo, Waitrose are selling it for £22 a kilo, and if you want to use a firm called Fine Food Specialists, a kilo will set you back a cool £34.50.

Now with that kind of a mark-up, we are almost into class ‘A’ drug territory – and this is where the crime fiction link comes in. In 2014, the estimable Jim Kelly updated his Peter

Shaw and George Valentine series with At Death’s Window. In addition to solving a series of burglaries at properties along the Norfolk coast owned by wealthy out-of-towners, Shaw and Valentine become involved in a turf war between product dealers. These are not your common-or-garden drug barons, or even owners of ice cream vans, but dealers in samphire! As I have illustrated, with a 300% mark-up available for an item that can be had for nothing, why bother with something as illegal and potentially lethal as narcotics? The problem in At Death’s Window comes when local folk are muscled off their home territory by criminal gangs using illegal immigrants as pickers. Think cockles and the Morecambe Bay tragedy, and you can see how it all might go pear-shaped.

So, as I sit down tonight and indulge myself with the last of the summer samphire, and a glass of something invigorating to wash it down, I shall drink a toast to Jim Kelly, anticipate the first sighting – and tasting – of the new season’s mussels, and dream about next summer. Oh yes, I almost forgot. Samphire pickles extremely well, and I have a few jars in the cupboard to sample in the dark depths of winter!

We have plenty of Jim Kelly on the site, for anyone whose interest has been piqued. There’s an appreciation of his writing, Jim Kelly – a landscape of secrets and a review of his latest book, Death Ship. You can also follow the link to get hold of a copy of At Death’s Window.

DEATH SHIP … Between the covers

In Jim Kelly’s novels, the past is like a sunken ship that has lain undisturbed on the sea bed for decades. Then, with a freak tide, or maybe some seismic shift, the ship’s blackened timbers surface once again, breaking through the surface of the present. In this, the latest case for Detective Inspector Peter Shaw and Sergeant George Valentine, the metaphor becomes literal. In the terrible storm of January 31st 1953, a tempest that battered the East Anglian coast and claimed over 300 lives, a dilapidated Dutch coaster, the Coralia, went down, taking its captain and crew with her.

Meanwhile, the unique seaside town of Hunstanton – unique in that it is an east coast resort which faces west – has been literally rocked by an explosion on its crowded beach. Something buried deep beneath the sand is triggered by some boys determined to dig a sink-hole sized pit before the tide sweeps in. There is a brief moment when something metallic and shiny appears in the wall of their excavation, but then hell is unleashed. Miraculously, no-one is seriously hurt, but the beach is closed to holidaymakers while forensic experts and a bomb disposal team from the army do their stuff.

Shaw is faced with several possibilities. Was the explosive device recently planted by extremists from the STP – Stop The Pier – movement, who are protesting against the construction of a huge new pier which will suck trade and footfall from existing businesses? Was the explosion a result – as a teenage boffin from King’s Lynn suggests – of the very late detonation of an unexploded bomb dropped in a Zeppelin raid way back in 1915?

Shaw’s case is complicated by the discovery of a dead diver, tethered to the underwater remains of Hunstanton’s Victorian Pier, destroyed by storms in 1978. Eventually, he learns that the murdered diver is the son of one of the crew members of the ill-fated Lagan, whose remains are rotting on the seabed a couple of miles distant from the pleasure beach. And what of the apparently guileless old lady who has been caught giving arsenic-laced sweets to people in a local ‘bus queue.

Detective partnerships have become one of the enduring clichés of crime fiction. Sometimes – but not always – the pairings work, and when they do, they are a very satisfying literary device. The trope usually requires the senior partner to be yin to the junior’s yang. In this case, Peter Shaw has the imagination. George Valentine the curmudgeonly common sense; Shaw is the live wire to Valentine’s earth. The telling difference between these two and other ‘odd couples’ is that Kelly explores the psychological make up of both men, and the glimpses into their personal lives are equally perceptive and revealing. Valentine is older than Shaw by many a mile; so much so, that Valentine actually served in the force alongside Shaw’s late father, a man still revered within the Constabulary. We also learn that were it not for a faux pas which almost ended his career, Valentine would now be Shaw’s senior officer.

New readers will be pleasantly surprised at how Kelly knits together the misdeeds of the past and the murderous intent of the present. Existing fans will simply smile, and say, “He’s done it again.” You will be pushed to find a novel which so successfully welds together the police procedural, the psychological thriller, the ‘whodunnit’, and the atmospheric novel of place. If you find one, please let me know. In the meantime, I will not be holding my breath – except in waiting for the next masterpiece from one of our finest writers. Death Ship is published by Severn House, and is available here. The official launch will be – very appropriately – at the RNLI Headquarters in Hunstanton on 3rd September. For tickets and enquiries ‘phone 07840 375 984