Philip Kerr’s Bernie Gunther novels bestride the 20th century, from the rise of the Nazis in 1930s Germany to the post war period when many countries still sheltered mysterious German gentlemen whose collective past has been, of necessity, reinvented. Gunther is a smart talking, smart thinking policeman who has kept his sanity intact – but his conscience rather less so – by dealing with such elemental forces as Reinhardt Heydrich, Joseph Goebbels, Juan and Evita Peron, and Adolf Eichmann. 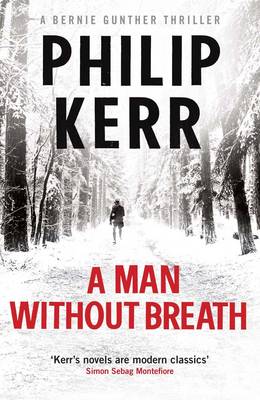 A Man Without Breath (2013) sees Gunther is working for an organisation whose very existence may seem improbable, given the historical context, but Die Wehrmacht Untersuchungsstelle (Wehrmacht Bureau of War Crimes) was set up in 1939 and continued its work until 1945. In 1943, on a mission from the Minister for Propaganda, Joseph Goebbels, Gunther is sent to Smolensk and entrusted with proving that the thousands of corpses lying frozen beneath the trees of the nearby Katyn Forest are those of Polish army officers and intellectuals murdered by the Russian NKVD, and not those of Jews murdered by the SS.

The action is set against a resurgent Red Army slowly grinding its way west, and a small but growing body of opinion among the more aristocratic members of

the German military that Hitler is a dangerous upstart who has already damaged the country beyond repair, and must be stopped. Adrift on a sea of violent corruption, Gunther constantly plays the role of the decent man, but in the end, he follows one theology, and one theology only. If he wakes up the next day with his head firmly attached to his shoulders, and has feeling in his extremities, then he has done the right thing. His conscience has not died, but it is far from well; it competes a whole chorale of competing voices in his head, each wishing to be heard. As he is left helpless by the world of spin and disinformation orchestrated by Dr Goebbels, (right) he must resort to his basic copper’s instincts to protect himself and uncover the truth.

The Katyn Forest murders are a matter of historical record, but it is only in relatively recent times that Russia has officially admitted responsibility for the massacres. As recently as 6 December 2010, Russian President Dmitry Medvedev expressed commitment to uncovering the whole truth about the massacre, stating “Russia has recently taken a number of unprecedented steps towards clearing up the legacy of the past. We will continue in this direction”.

We know the terrible details but Gunther only has his suspicions. Kerr weaves a brilliant tale where Gunther’s arrival at the truth has the ironic consequence of removing culpability for the deaths from one group of brutal criminals and bestowing it upon another. Those of us who are old enough to remember the post-war years, if only as children, will be familiar with the feeling that the Russians were bastards every bit as awful as their Nazi opponents, but at least they were our bastards – at least until they reached Berlin.

A Man Without Breath is available in all formats.