MR BUNTING AT WAR . . . Between the covers 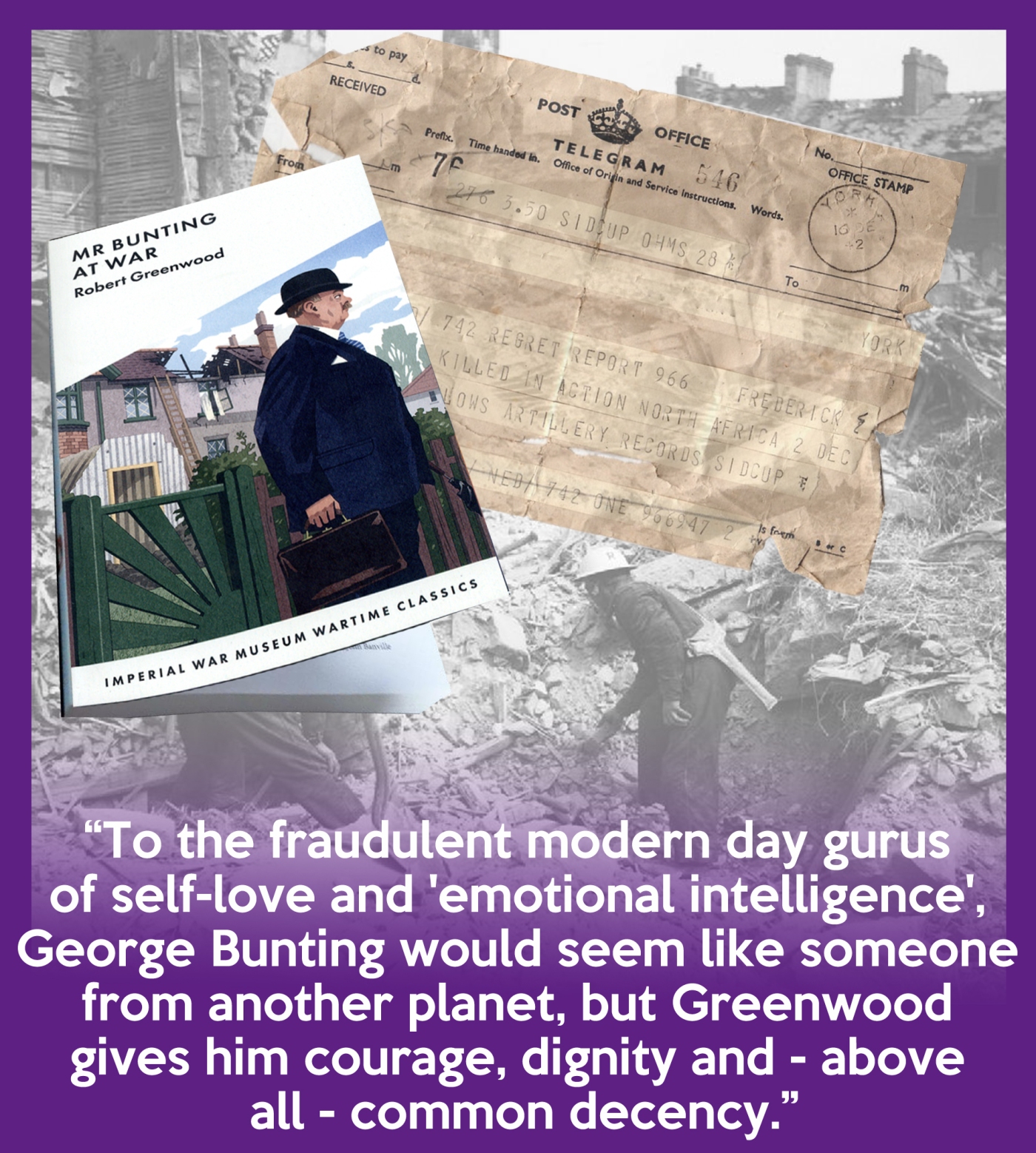 This is another in the superb series of republished novels set in the Second World War. As author Wiliiam Boyd remarked:

“If poetry was the supreme literary form of the First World War the, as if in riposte, in the Second World War, the English novel comes of age. This wonderful series is an exemplary reminder of that fact.”

Robert Greenwood introduced Mr Bunting to the world in the book of the same title, published in 1940. He is something of a ‘stuffed shirt’, but entirely without malice, and he lives with his family in Essex, but within commuting distance of his work at an ironmongers in London. This is set in 1941, with London under siege from the skies, but by the end of the book the strategically unimportant district where the Buntings live is feeling the full wrath of the Luftwaffe.

George Bunting and his wife Mary have three grown up children, Chris, Ernest and Julie. Chris is, it could be said, George’s favourite son. He is practical, endlessly optimistic and cheerful, while Ernest is more introspective – and a gifted pianist. Both young men are trying hard to make a go of their respective careers, while Julie is something of a dreamer, and looking for suitable work.

The day to day world that Robert Greenwood describes would have been completely familiar to thousands of readers in 1941. So many elements of life then, however, are almost unimaginable to us now: the sheer terror of being under regular attack from the skies, the dread of receiving a telegram from the armed forces, the privations and shortages of food and the heavy hand of a wartime government laid on every aspect of normal life.

I was initially tempted to compare Mr Bunting with another  gentleman from an earlier generation, Charles Pooter. Mr Pooter (the creation of George and Weedon Grossmith in Diary of A Nobody) lived closer to ‘town’,  in Holloway. His house was called The Laurels, while Mr Bunting lives at Laburnum Villa. While the Grossmiths wanted us to laugh at Mr Pooter, Robert Greenwood takes a very different approach. He invites us, perhaps, to smile and raise an eyebrow at Mr Bunting’s rigid view of the world and his own place in it, but he never mocks. Bunting is a man of simple pleasures:

“There was nothing Mr Bunting liked better than to escape from the war and listen to his wife and daughter-in-law discuss the technicality of ‘turning the heel’ or report on experiments with recipes recommended by the Ministry of Food. To sit placidly smoking and listening to these discussions was to realise one had a home and a wife who was a jewel. If there was anything better in life, Mr Bunting wanted to know what it was.”

Through Mr Bunting, as he travels into London each day on his morning train, we see the carnage being wrought on the city. As he walks from the station to Brockleys, things almost become too much for him:

“Through the devastation he walked, stepping over hoses, skirting the edge of craters, threading his way past grimed and bloodshot firemen, single-mindedly pursuing his own particular business. There were gruesome sights, too, sensed rather than seen, tarpaulins stretched over what he knew were human forms. Once, a lock of a girl’s hair fluttered brightly as the wind ruffled her crude shroud. He bit his lip, and looked away.”

In George Bunting, Robert Greenwood created a character who is ordinary in the extreme, socially gauche, but from a generation of people who simply ‘got on with things’ when the darker side of life – in this case, a world war – threatened to overwhelm them. When tragedy strikes the family, he is devastated, but breaking down is simply something that was ‘not on’ in those days. To the fraudulent modern day gurus of self-love and ’emotional intelligence’, George Bunting would seem like someone from another planet, but Greenwood gives him courage, dignity and – above all – common decency. Mr Bunting at War is an Imperial War Museum Classic, and will be out on 21st April. 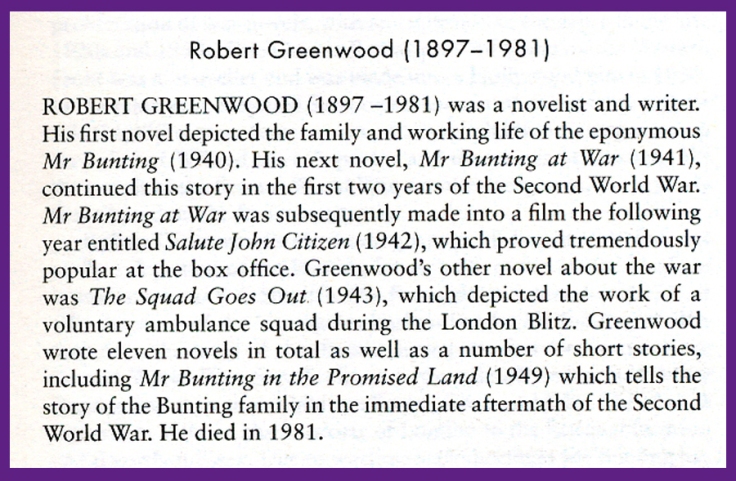 For reviews of other IWM Classics, click the link below. 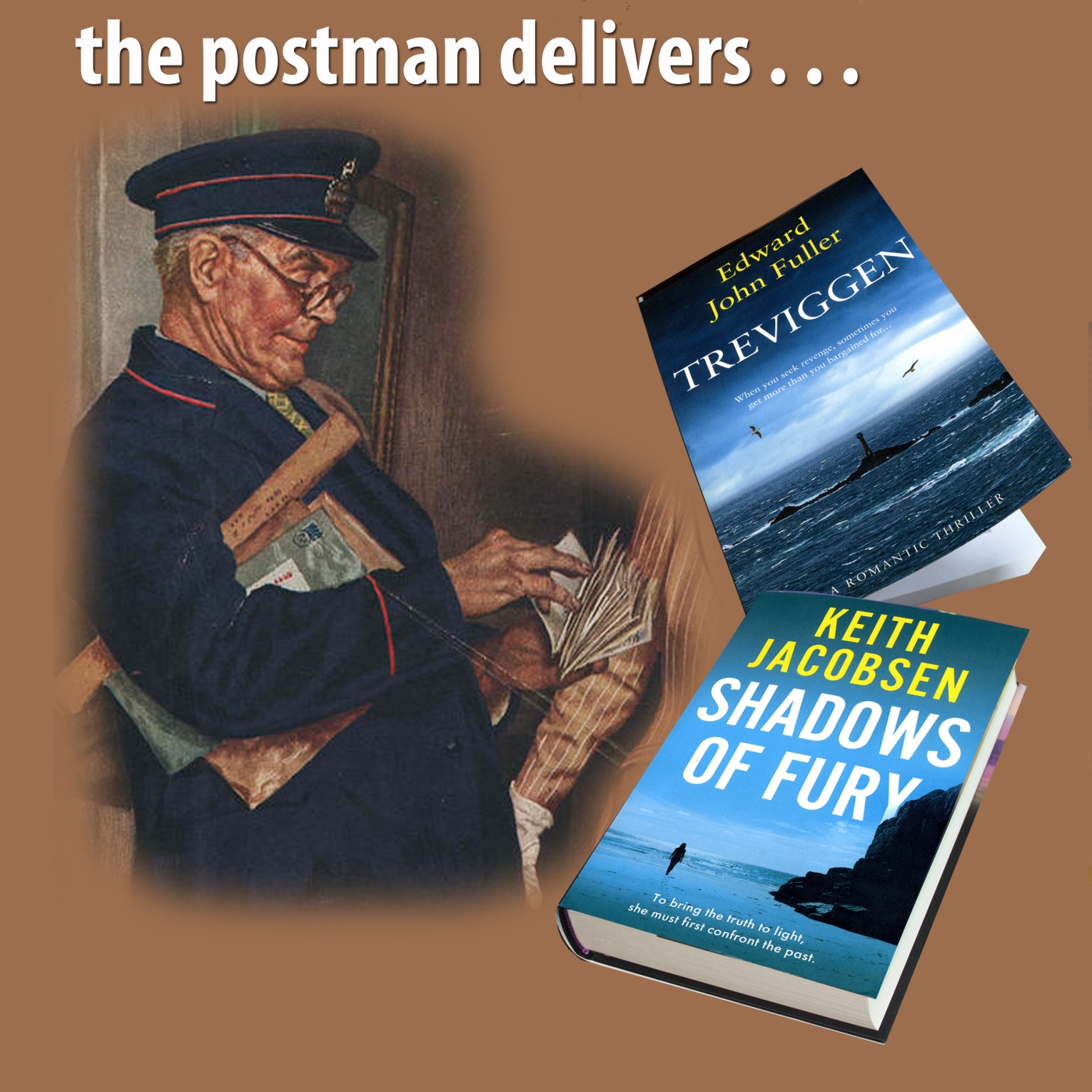 You won’t need to be an expert in English place names to work out where this is set – and no, it’s not a grim piece of domestic Noir set in Stoke-on-Trent. As the name suggests, we are in the brooding and romantic country of Cornwall, where Emma Courteis just wants to live quietly with her daughter in Cornwall and paint. Of course, that’s not how things turn out, and we are promised revenge, and a tale that is brutal, romantic and sensual. It is available now, published by Matador and, just for a change, here’s a link to buy it from somewhere other than Amazon. 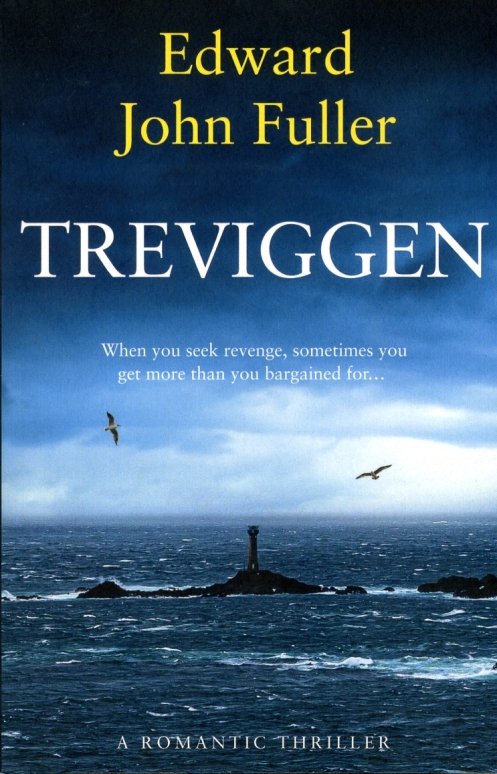 SHADOWS OF FURY by Keith Jacobsen

We remain in Cornwall, where a dying woman is suffocated in her hospital bed. Her last visitor, Madeleine Reed, is accused of the crime. There are no witnesses. Madeleine cannot recall committing the murder and has no motive. Claiming to be pursued by the Furies, punitive figures from Greek mythology, she is found guilty of manslaughter on grounds of diminished responsibility. After her release from a secure hospital she is drawn back to the Cornish coastal village where she lived before the murder and where her mother had died years before in mysterious circumstances.

Slowly, her memories begin to return. She knows that she must finally confront the hideous Furies who alone can bring the truth to light. But can she bear to uncover the horrific, distant memories she has repressed for so long? This is published by The Book Guild and is available now. 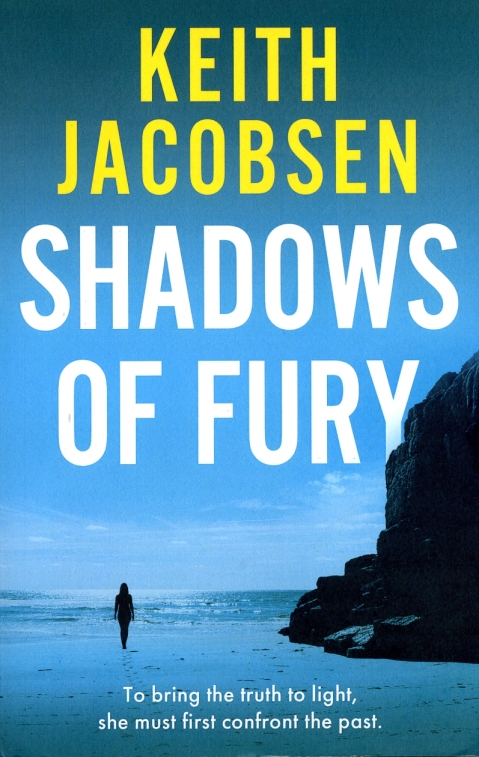