PAST TIMES – OLD CRIMES . . .The Little Man From Archangel by Georges Simenon

Was Georges Simenon the greatest ever Belgian? He was certainly the most prolific both in his literary output and his apparently inexhaustible sexual appetite. Best known for his Maigret novels and short stories, he also wrote standalone novels. One such was Le Petit Homme d’Arkhangelsk, first published in English in 1957. This new edition, translated by Siân Reynolds (who is the former Chair of French at the University of Stirling) is, like most of Simenon’s books short – just 185 pages – but as powerful a story as he ever wrote.

We are in an anonymous little town in the Berry region of central France, and it is the middle years  of the 1950s. Jonas Milk is a mild-mannered dealer in second hand books. His shop, his acquaintances, the café, bar and boulangerie he frequents are all like spokes of a wheel, and the hub is the bustling Vieux-Marché. Jonas appreciates his neighbours, such as Le Bouc behind the counter in his bar, Gaston Ancel the butcher, with his booming voice and bloodstained apron, and the Chaignes family in their grocery shop. Jonas values these people or, to be more precise, he values their acceptance of him, because he is an outsider. Sure, he has been in France since he was a small boy, his family – from the port on Russia’s White Sea coast – having sought refuge in France during the Revolution. They have all returned to their homeland, and Jonas does not know if they are alive or dead. He is also a Jew, but because of his fair hair and complexion he survived the attention of the Nazis during the Occupation.

Jonas Milk has a wife. Two years earlier he had converted to Catholicism and married Eugénie Louise Joséphine Palestri – Gina – a voluptuous and highly sexed woman sixteen years his junior. No doubt the frequenters of the Vieux-Marché have their views on this marriage, but they are polite enough to keep their opinions to themselves, at least when Jonas is within earshot. But then Gina disappears, taking with her no bag or change of clothing. The one thing she does take, however, is a selection of a very valuable stamp collection that Jonas has put together over the years, not through major purchases from dealers, but through his own obsessive examination of relatively commonplace stamps, some of which turn out to have minute flaws, thus making their value to other collectors spiral to tens of thousands of francs.

Gina has had her flings before, though, seeking physical excitement that Jonas does not provide. He has born his shame in silence, and it has never occurred to him to challenge her. This time, however, when he makes his morning purchases – his croissants, his cup of espresso – and is asked where Gina is, he makes a fatal mistake. Perhaps through embarrassment, or irritation perhaps, he tells a small lie.

“As a rule, Gina, in bedroom slippers, often with her hair uncombed, and sometimes wrapped in a flowery dressing gown, would do her shopping early on market days, before the crowd.
Jonas opened his mouth and it was then that, in spite of every instinct telling him not to, he changed the words he was going to say.
“She’s gone to Bourges.”

Four words. Each of them harmless on its own, but together, something entirely different . What happens next is a masterpiece of brilliant storytelling, as in just a few days, the world of Jonas Milk begins to unravel. Simenon’s ability to describe profound events while framing them with little inconsequential moments of observation – a blackbird pecking at crumbs in a back garden, a café owner turning his face away from the steam of his coffee machine, a wife not cleaning up the frying pan after cooking herrings – is astonishing.

You will probably read this book in a couple of sessions. Yes, it’s a short book, anyway, but my goodness, what an impact it makes. The Little Man From Archangel is published by Penguin Modern Classics, and is out on 1st April.

DEATH COMES TO NEWMARKET . . . A savage murder in Victorian Louth (2) 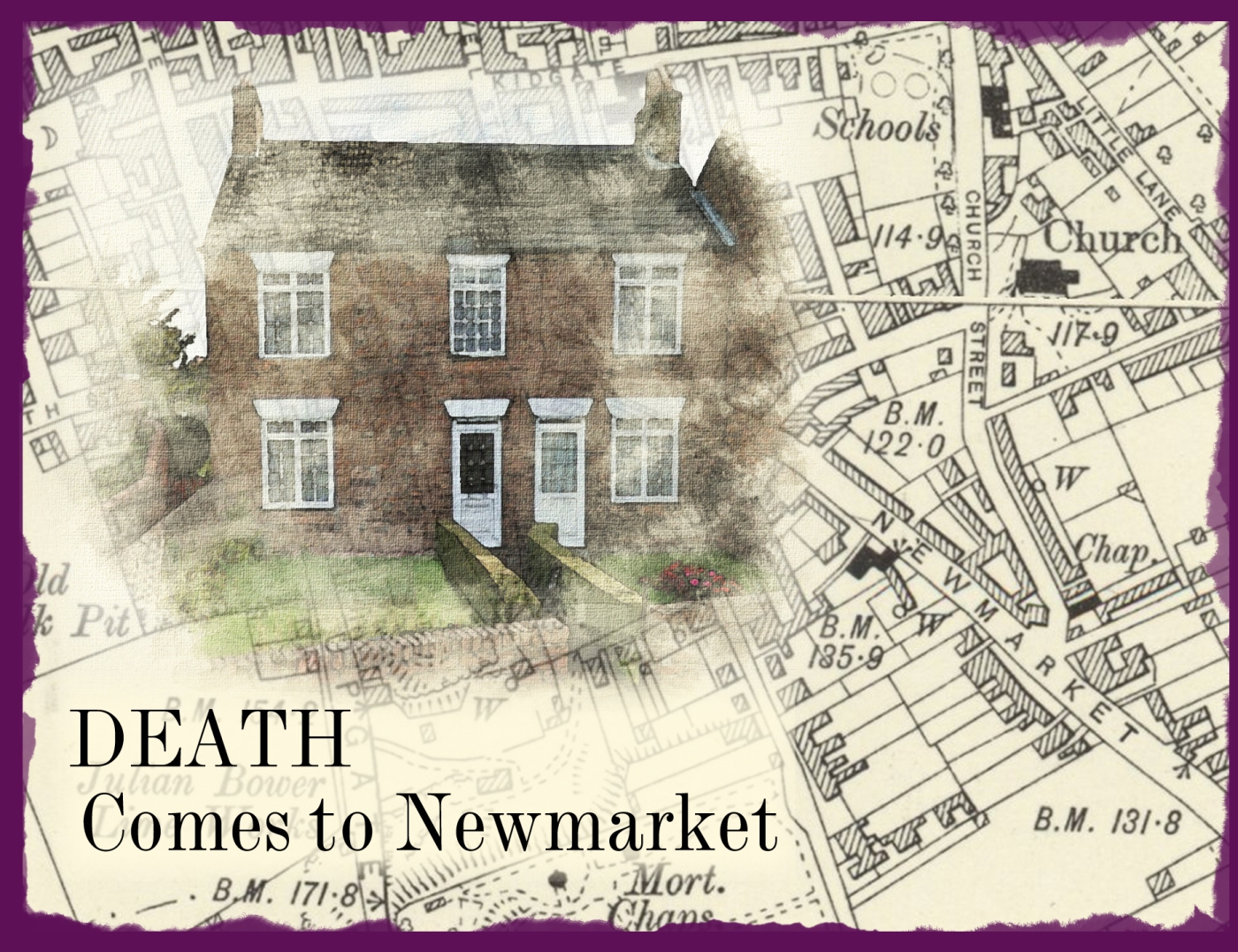 SO FAR – On the evening of Sunday 7th March, 1875, 22 year-old Louisa Hodgson is stabbed to death by a man – Peter Blanchard – who had been courting her for four years. She dies almost instantly after Blanchard’s knife pierced her heart. The pair had been together in the sitting room of Louisa’s family home at 29 Newmarket (below) Blanchard has fled the scene.

William Turner, a dealer in poultry, lived with his wife Emma in their small house in Vickers Lane. It was 10.30pm, Emma Turner had gone to bed, and William had locked the house up and was preparing to join his wife, when he heard someone trying the front door. He went to investigate, and found Peter Blanchard. Blanchard was clearly in a state about something, and asked if could come in. Turner’s evidence continued as follows:

“He asked if I would give him some whisky. I said my wife had gone to bed, but I would call her down and see if we had such a thing in the house. She came down and said we had not She gave him glass of brandy instead. He said, “I have done It”. I told my wife to take the bottle away and give him no more.

I said, “Done what Peter ?” At first he made no reply, but on my again asking him, he said, “I have stabbed the missus.” These were his exact words. I said, “What with ?” and he replied, “With a butcher’s knife. If I had not done it with a butcher’s knife I should have done it with this, putting his hand into his pocket and pulling out a razor. He put it back into his pocket. He first opened and shut it again. He was very excited and irritable. I could not say he was drunk. He had the use of his limbs as well as I have mine now.

My wife prevailed upon him to take the razor from his pocket and give to me. I told my wife to call my son to fetch Peter’s father and mother, and also to go to Mr. Hodgson’s and inquire what it meant. On my son’s return he said “She is dead.” 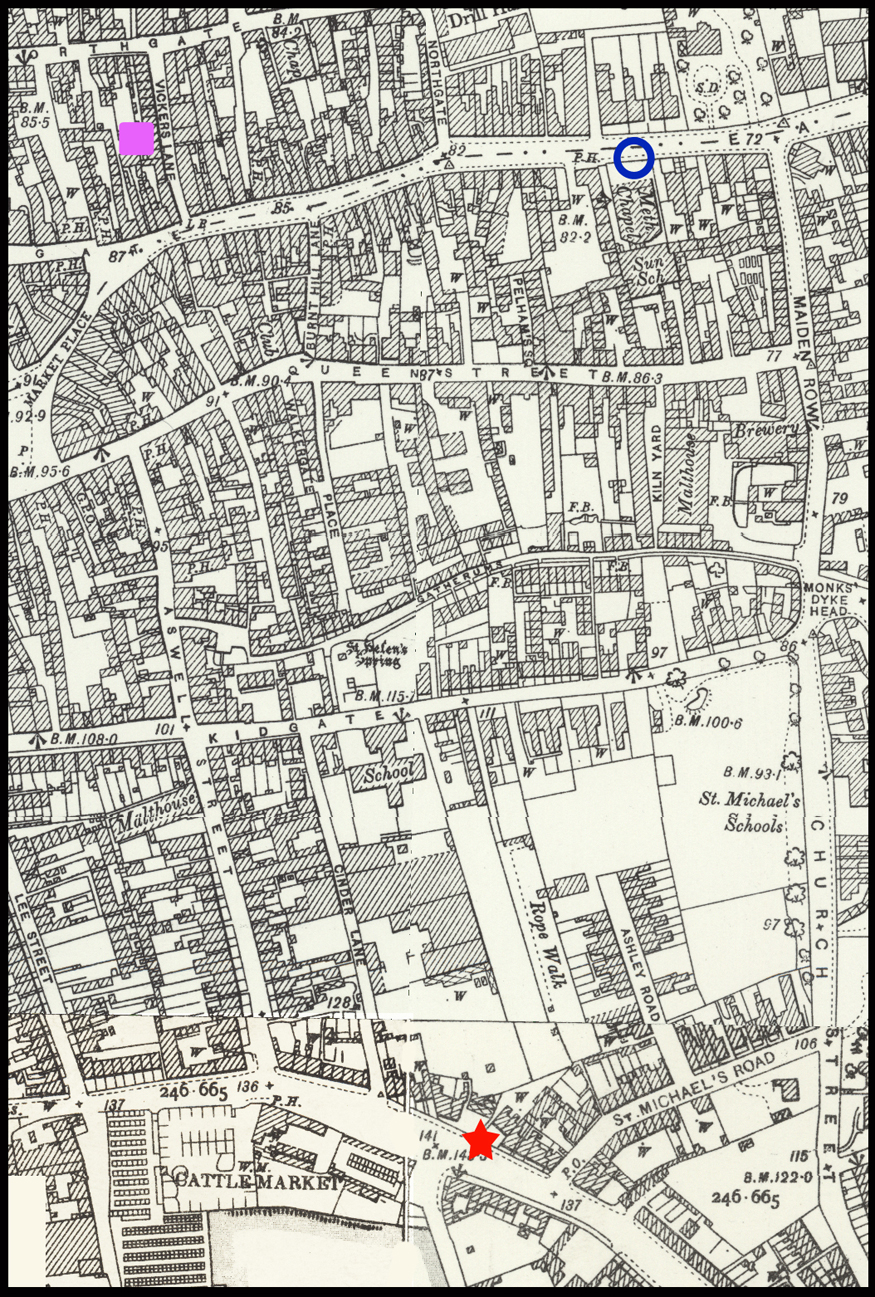 The Hodgsons had already sent for the police, and Sergeant Wilkinson and Superintendent Roberts were at the scene when 16 year-old Thomas Turner arrived. He immediately informed the officers that Peter Blanchard was at the house in Vickers Lane. When Wilkinson and Roberts arrived, there was a scene of complete confusion. There were several members of the Blanchard family in the house, as well as the Turners and their five other children. Superintendent Roberts then arrested Blanchard. This was his evidence:

“On my seizing the prisoner he said, “I’ll go”. I’ll go without the handcuffs”.
He then said, “Is she dead?
I said, “Yes she is, and you are charged with killing her, but keep yourself quiet”.
He was a in a very excited state. He answered me:
It’s a good job, and I’m glad.”
We then brought him to the police-station, where I told him he would be detained on a charge of wilful murder. To this be said ,
“Oh, I did it and I’ll die like a man for her.”

I told him that what he said would be taken down and given in evidence against him.  I  cautioned him and expressly warned him that whatever said would be taken down and produced against him. I did not put any questions to him. The exact words I used were these, when he was in the cell:
“When I told you that you would be charged with this serious offence, I did not know for a certainty the girl was dead. You will be charged with the wilful murder of Louisa Hodgson”’
He then said: “Is she dead?” and on my replying, “I have already told you so” he said:
“God bless her.”
He was undoubtedly under the influence of drink; but my impression was that be knew well what he was doing.”

At the Magistrate’s Court the next morning, Monday 8th March, Dr Higgins gave his account of Louisa’s injuries:

“I am a registered medical practitioner, practising in Louth. I was sent for to see Louisa Hodgson at about a quarter past ten o’clock. I went at once and found her dead. I saw a wound on the chest but did not then make further examination. This morning I made a post mortem examination. The wound was situated about half an inch below the nipple of the left breast. It was an incised wound about one inch in extent. I traced the wound which had penetrated the chest wall between the fourth and and fifth ribs, passed through the interior margin of the upper lobe of the left lung, and entered the left auricle of the heart.

I found a considerable quantity of blood effused into the pericardial and pleural sacs. The wound was sufficient to cause death rapidly, almost instantaneously. The heart would only beat a few seconds after it was inflicted.

I believe the knife produced would produce a similar wound to one described. It might have penetrated four inches.”

Blanchard had thrown away the murder weapon (a butchers’ knife) but it had been recovered in Aswell Street. He had taken the knife from his landlady’s kitchen. The magistrates committed Blanchard to be tried for murder at the next Assizes in Lincoln.

Louisa Hodgson was laid to rest in Louth Cemetery on Wednesday 10th March.

In PART THREE – trial and execution