THE MUSEUM OF DESIRE . . . Between the covers 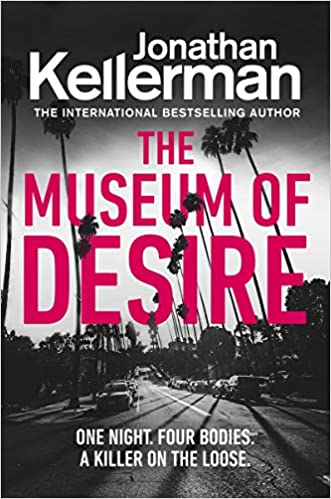 The strange-looking empty mansion in the dry hills above Los Angeles is rented out as a venue for everything from cancer charity fundraisers to wild parties. As the much put-upon guy from the agency wearily pushes his cart of cleaning materials up the hill, he is expecting the usual joyless cocktail of spilled food, used needles and condoms. What he actually finds causes him to part company with his breakfast burrito.

In a stretch limo parked in front of the house, he finds four people, each very, very dead, and with the floor of the car swimming in blood. Cue another case for LAPD Detective Milo Sturgis and psychologist Dr Alex Delaware. Veterans of the long-running series (this is book number 35 since When The Bough Breaks in 1985) will know the basic set-up. Delaware’s day job is in child psychology, while Sturgis is, in now particular order, gay, unkempt, a brilliant cop and eternally hungry.

The four corpses in the limo seem to have nothing at all in common aprt from being dead; a thirty-something professional bachelor with an insatiable – but perfectly legal – love life, and elderly chauffeur, a gentle and harmless man with mental problems who lives in sheltered accommodation, and a rather unprepossessing middle-aged woman who, it transpires, had drink and drug issues, and lived mostly on the streets. To add to the mystery, the forensic team analyses the blood on the floor of the car – and it is canine.

Delaware and Sturgis are convinced that the killings took place elsewhere, and the interior of the limo was an elaborate stage set. But who is the director of this hellish drama, what is the message of the play, and who was the intended audience?

There will be, no doubt, some people who will look down their noses at this book – and others like it – while dismissing it as formulaic. Of course it is written on a certain template, but that’s what makes it readable. That’s why readers turn, again and again, to books that are part of long running series. We don’t want John Rebus to start behaving like Jack Reacher, any more than we will be happy for Carol Jordan to turn into Jane Marple. The Museum of Desire is slickly written, for sure, but I think a better word is ‘polished’. Both the dialogue and interaction between Delaware and Sturgis crackle with their usual intensity, and we are not short-changed in any respect in terms of plot twists and deeply unpleasant villains.

The Museum of Desire is published by Century/Arrow/Cornerstone Digital, came out in hardback  and Kindle earlier this year, but this paperback edition will be available from 12th November.

One thought on “THE MUSEUM OF DESIRE . . . Between the covers”