POSSESSED . . .Between the covers 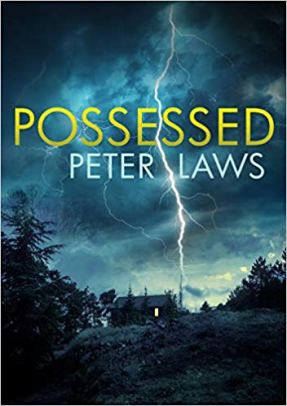 Peter Laws introduced us to Matt Hunter in Purged (2017) and we learned that he is a former priest whose total loss of faith coincided with tragic personal events. Now, he lectures in the sociology of religion and belief systems, and has a reputation (one which does not sit lightly with him) for being the go-to guy when the police have a case which is ‘not dream’t of in our philosophy’.

When a good old fashioned milkman, driving his ecological sound electric milk float, makes an horrific discovery in a suburban greenhouse, the result is that the police have an apparently raving madman on their hands. He is emaciated, disheveled and both frightened and frightening. This creature from hell does, however, have a day job. Tom Riley is the chef at a local pub and has, apparently, a Shepherds’ Pie to die for. When the baffled police summon Matt Hunter to talk to this fellow he finds him manacled to a chair and spitting out Exorcist-style obscenities.

unter discovers that Riley is a devotee of a local church, one which, depending on your view might be termed either ‘charismatic’ or ‘a bunch of eyeball-rollers’. Things take a dramatic turn for the worse when Riley’s wife is discovered, horribly mutilated, in one of the customer chairs of her home hairdressing salon.

As the case begins to attract lurid national interest, Hunter is roped into a no-holds-barred reality TV show, to be one of the talking heads in an investigation into demonic possession. While stoutly sticking to his sceptical opinions Hunter is swept along in the flood-tide of the media frenzy, and comes face to face with an infamous American evangelist who makes a living from casting out demons. The TV company, cameras eagerly devouring every second of the interplay between the apparently tormented victims of demonic possession and their potential saviour, book a rural retreat for a blockbuster special which will see Good and Evil come face to face, interrupted only with tasteful ads from the show’s sponsors.

hat happens next is violent, bloody, improbable – but totally gripping. Of course, Matt Hunter survives to return to his delightful wife and children, but not before he is forced to question his firmly-held disbelief in ‘ghoulies and ghosties, and long-leggedy beasties, and things that go bump in the night.’

There are two interlinked paradoxes in Possessed. The first is that Matt Hunter is a disbeliever in all things paranormal and in any possibility that there are any beings or forces outside man’s own imagination and mental state. He is, however,the creation of an ordained church minister whose own sense of the spiritual life is, I assume, central to his faith. Secondly – and do read the afterword to Possessed which is separate from the usual authorial Oscars speech thanking all and sundry – behind all the comic book gore and satirical swipes at the grossness of TV reality shows, Laws makes a serious point about troubled people searching desperately for supernatural answers to problems which come from within themselves. 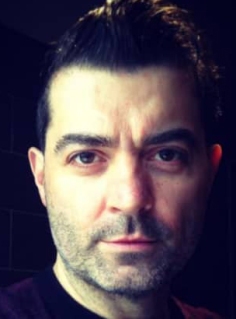 Laws (right) doesn’t exactly play it for laughs, but amid the knockabout spookery and Hunter’s own predilection for making wisecracks, there is serious stuff going on. It is worth comparing Matt Hunter with another fictional investigator of strange things – Phil Rickman’s Merrily Watkins. Like the real life Peter Laws, Merrily Watkins is a priest. Like Matt Hunter, merrily doesn’t necessarily believe in the supernatural, but she is totally convinced that some folk do.

Possessed is evidence that Peter Laws goes from strength to strength as a story teller, and that his tales of Matt Hunter’s encounters with possible demons are cast iron certainties to be good reads. Possessed is published by Allison & Busby and is out now.

Read more about the previous Matt Hunter novels by clicking this link.