WHEN YOU SEE ME . . . Between the covers

I first encountered Lisa Gardner’s entertaining ensemble of law enforcers just over a year ago in Look For Me. D.D. Warren, the Boston cop whose exploits began in 2005 with Hide was there, as was the rather more exotic and eccentric Flora Dane – a young woman who has been damaged physically and mentally by a long torment of captivity and abuse at the hands of Jacob Ness, a psychopath who was taken down in dramatic fashion when the FBI raided his hideout. When You See Me reunites Warren and Dane, along with one or two other key players, as a couple of hikers out for the day in the Appalachian mountains find human remains. When police give the site their full attention other bodies are found. Are they previously undiscovered victims of the unspeakable Ness, or has the area been host to another sadistic killer?

Flora Dane is at the centre of this novel, not only because of her connection with the history of the area, but because she has teamed up with Keithe Edgar, an amateur – but extremely clever – data analyst whose unofficial skills are harnessed by the federal agents as they try to unpick the knot of the case. Flora’s attitude to men has been, to put it mildly, compromised by her trauma at the hands of Ness, but in Keith she might – just might – has found a person to trust, a person with no negative motives, and someone who can ward of the fears and horrors embedded in her memory.

he storytelling technique which uses multiple narrators is much used and, it must be said, often abused, but Kisa Gardner nails it here, particularly through the eyes of Bonita, a Mexican girl maimed in childhood, unable to speak and used as a maid-of-all-work in an ostensibly respectable Victorian mansion, now an upmarket Bed & Breakfast facility in Niche, Georgia – the nearest settlement to where the human remains have been uncovered. Bonita is not her real name. Only her late mother knows what it is, but when D.D. Warren meets her during the investigation, she says:

“’Bonita’ D.D. said softly.’It’s the Spanish word for pretty. What do you think? I’ll call you Bonita.’” 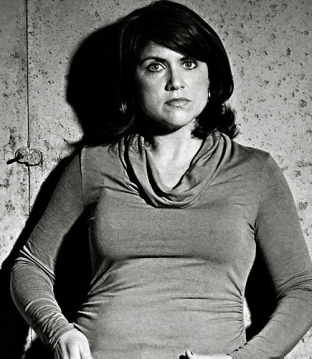 Almost inevitably, the dreadful goings on in the mountains surrounding Niche must involve some of the locals, but Lisa Gardner (right) lays out several enticing red herrings before revealing precisely which of the eminent townsfolk are involved in a dreadful conspiracy, a toxic cocktail of abduction, sexual slavery and-ultimately-murder. Flora, D.D. and the other members of the team eventually corner the evil genius at the centre of Niche’s darkest secret, but not before we are treated to a spectacularly violent finale involving secret tunnels, torture and, intriguingly, death-by-dishwasher.

merican crime fiction is a huge, diverse and somewhat unwieldy beast, but at its best it is slick, literate, flawlessly plotted, endlessly enthralling and with a narrative drive that seems to come as second nature to such writers as Lisa Gardner. When You See Me will be out in Kindle, published by Cornerstone Digital on 28th January and in hardback by Century on 20th February. The paperback will be available in July.