ALL HIS PRETTY GIRLS . . . Between the covers

Alyssa Wyatt is pretty much your showcase American Mom. Not Middle American geographically, as she lives in New Mexico, but she ticks most of the other boxes; handsome successful husband, two teenage kids, nice house and a fulfilling career – as a cop. Like so many fictional law enforcement types, she has a dark past centred in childhood trauma, but what is done is done, and she lives for Holly, Isaac and husband Brock.

Detective Wyatt and her professional partner Cord are at the forefront of the investigation into a missing woman. Callie McCormick has no apparent enemies apart from the person who has abducted her from her smart home. There is no ransom demand, no body and no progress in the police investigation. What we do have is an increasingly angry Mr McCormick and a detective squad room with a worryingly empty whiteboard, and fanciful sightings multiplying by the hour once McCormick offers a hefty cash reward for information. 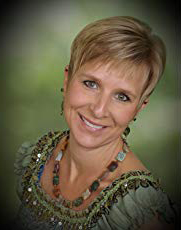 harly Cox reveals to us the identity of the bad guy fairly early in the piece. Or, rather, she doesn’t. Over enigmatic? Quite probably, but to say more would ruin the fun. Alyssa and Cord chase their tails with more determination than success, while the sadist at the centre of the mayhem plans his next atrocity.

What it may lack in nuance, All His Pretty Girls more than compensates for in punch, narrative drive and sheer energy. Albuquerque, New Mexico, is known as The Land of Enchantment, and also the setting for the epic TV series Breaking Bad. It is also home to author Charly Cox. She says that she enjoys eating copious amounts of green chili and other spicy foods, and there is plenty of heat and burn in this novel. She has come up with a sensational – and very clever – plot twist in this, her debut novel and, although the first half of the story is familiar Silence of The Lambs territory – serial killer, murdered women, frustrated cops desperate for clues – Cox then springs a breathtaking surprise on us and the remaining pages just fly by.

All His Pretty Girls is available as a Kindle on 23rd October, and is published by Hera. Hera is a brand new, female-led, independent digital publisher, founded in 2018. They say:

on’t be misled, however, into thinking that All His Pretty Girls is Chick Lit. Yes, a female is the central character, but there’s no shortage of graphic violence and enough of the ‘mean streets’ to satisfy fans of hard-boiled crime.