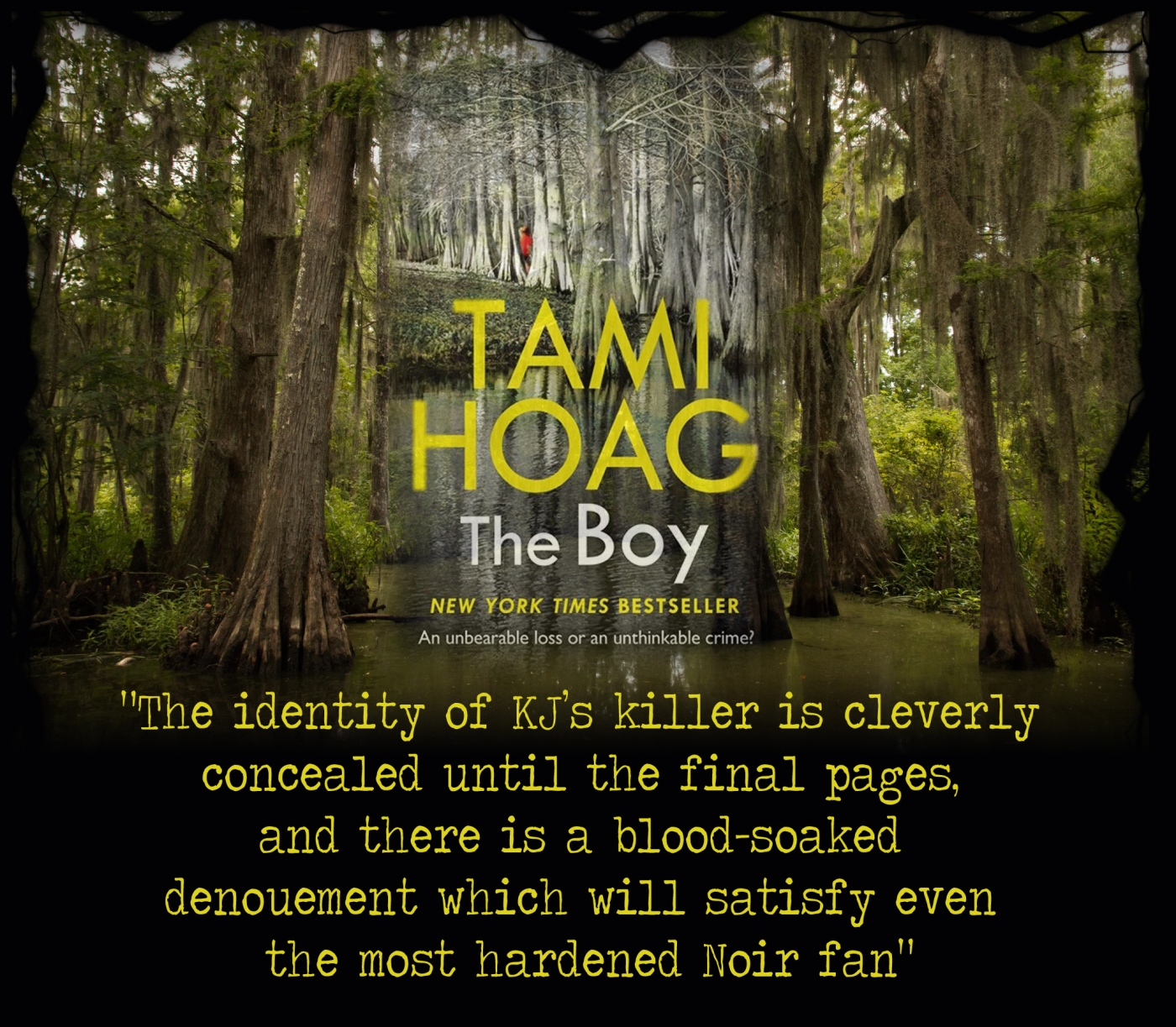 I do love me a good,sweaty Southern Noir, preferably down in Louisiana, with ‘gators thrashing about in the bayou, a storm blowing in from the Gulf, insects the size of golf balls on Kamikaze missions against the fly screens, and folk pushed to the limits of their tolerance by the relentless humidity. Throw in a dash of Cajun music and Acadiana French cursing, and I am set for the night. Tami Hoag’s latest novel ticks all the required boxes.

Hoag, who hails from the relatively temperate zone of Iowa, has created a brilliant husband and wife police partnership in Nick Fourcade and Annie Broussard. The pair first emerged on the printed page as long ago as 1997 in A Thin Dark Line but, of course, crime fiction time isn’t the same as real time, and the two cops are still relatively young and beautiful in Hoag’s latest thriller, The Boy. They are called to a beaten up shack in the sticks beyond the somnolent settlement of Bayou Breaux, and they find a seven year-old boy hacked to death with a knife, while his mother has apparently fled the scene, barefoot and bearing wounds from the same blade that brutalised her son.

Genevieve Gauthier has a past, however. Before settling in Bayou Breaux with son KJ, she has been no stranger to law enforcement. Blessed – or cursed – with an ethereal and vulnerable  beauty designed to act as a magnet to predatory men, she has served jail time for suffocating her first-born child. Fourcade and Broussard are faced with a dazzling and perplexing star burst of inconsistencies as they try to find who killed KJ. Why was Genevieve allowed to escape with relatively minor injuries? Where is KJ’s teenage baby-sitter, Nora? Is her disappearance connected to KJ’s death?

Fourcade and Broussard have a bitter enemy in the shape of Kelvin Dutrow, their boss. As Sheriff, he likes to dress in tactical combat gear, his belt heavy with weapons he has no idea how to use. He likes nothing better than a press conference where he can strike a pose, talk tough and play to the camera. His animosity to the pair reaches fever pitch when they discover that not only does he have a sinister past, but it comes with some highly questionable connections to the bereaved young woman nursing her injuries in the local hospital.

The identity of KJ’s killer is cleverly concealed until the final pages, and there is a blood-soaked denouement which will satisfy even the most hardened Noir fan. The Boy is lurid, yes, and certainly melodramatic, but it is a gripping read which had me canceling other activities right left and centre so that I could get to the end.

The Boy is published by Trapeze and is out as a Kindle on 31stDecember 2018, and will be available in other formats in 2019.