KINGDOM OF THE BLIND by Louise Penny

Chief Inspector Armand Gamache of the Sûreté du Québec has been entertaining readers since 2005 when he made his debut in Still Life and his creator, Louise Penny, has a shelf full of literary awards for her efforts. In his latest case, Gamache has a very personal interest. An elderly woman whom he has never heard of, let alone met, has named his as the executor of her will. The document is full of odd bequests and instructions that suggest the old lady had long since taken leave of her senses, but when murder intrudes, Gamache finds himself involved in a case so full of menace, that a dotty senior citzen is the least of his problems. Kingdom of The Blind is published by Sphere and will be available in hardback and Kindle on 27th November.

Some ex-military men find that civilian life is hard to deal with, but Paul Stafford is coping well. He has used his retirement pot to start a small recycling business and everything in the scrapyard seems to be rosy, until he wins a lucrative contract to run a further five sites. What should be a business triumph turns into a nightmare for Stafford when he realises that his new sites have been previously used by a powerful criminal organisation, and the bad guys do not take kindly to their work being interrupted. Murder and violence come as second nature to them, and when his own employees begin to feel the full clout of the gangsters, Stafford must stand and fight – both for them and his own integrity. Trashed, from Troubador Publishing is available now.

Jim Pinnells is an international project manager who has worked in such diverse concerns as the oil industry, military hardware, renewable technology and national security. His knowledge of Thailand stems from a spell there working for the UN, and Reflections is set in Bangkok, where a poignant human drama is played out against a backdrop of one of the world’s most secretive criminal enterprises – the trade in human blood. Ed and Diana seem to have it all – beauty, talent and love for each other – but when their first child is born irreparably brain damaged, their world fall apart. Ed pursues the heartbroken to Diana to Thailand but a case of mistaken identity plunges him into a nightmare world of violence, kidnap and espionage. Reflections is published by Troubador and is out now. 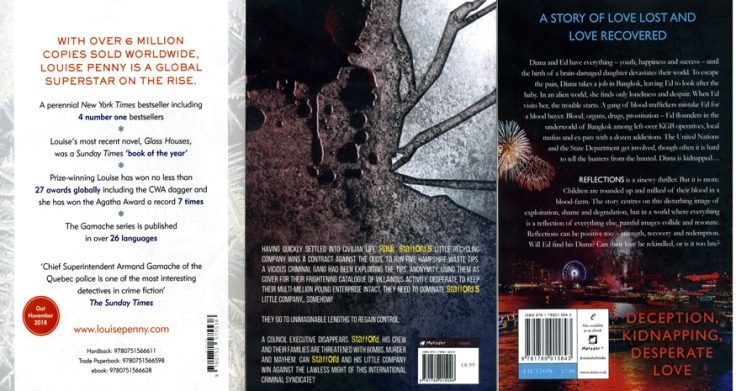