THE POLISH DETECTIVE . . . Between the covers

FICTIONAL SCOTTISH COPPERS – rather like single malt whiskies – are spread the length and breadth of that fine country. Highlands, Lowlands, islands, stately university cities, gritty oil and gas ports, mistily romantic glens and litter-strewn council estates where hope goes to die. Chris Longmuir has set her DS Bill Murphy novels in Dundee, but she has by no means cornered the Tayside market, for now comes Hania Allen with the first in a series set in Dundee and featuring Polish-born DS Dania Gorska. 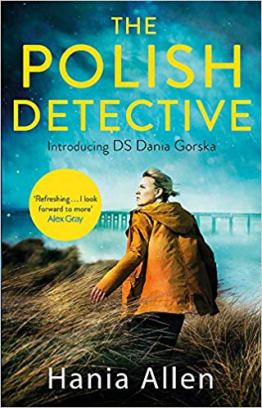 Dania Gorska has come to work in Dundee after starting her career in London with the Met. A divorce from husband Tony (watch out for the clever twist) has left her footloose and fancy free. Her exemplary record has meant she has enjoyed a swift and welcome transfer to Police Scotland. She lodges with her brother Marek, who is an investigative journalist.

The discovery, in a farmer’s field, of the body of a female academic displayed in the manner of a scarecrow sets in train a murder enquiry which takes Gorska and her colleagues down a twisty and circuitous road where they come across Druids, an eccentric Laird, two missing schoolgirls – and another girl obsessed with studying how dead creatures decay. As you might expect, the killer hasn’t finished and more corpses end up on the pathologist’s cutting table. Early on in the narrative, one of the characters comes across as a definite ‘wrong ‘un’, but Allen weaves the threads of the plot into a cunning riddle with a surprising and satisfying solution.

The Polish Detective is in some ways a standard police procedural which chugs along nicely on its accustomed rails. All the usual characters are present and correct; no such story would be complete without a dyspeptic senior officer, the obligatory post mortem scene with a sarcastic medical professor wielding the bone saw, the male junior detective who thinks he’s Jack – or perhaps Jock – the Lad, and the mind numbing tedium of the door knocking and CCTV scanning that sits behind every brilliant solution to a murder mystery. What lifts this book above the average is the character of Dania Gorska herself, and in particular her musical passion for, naturally, her great countryman Frédéric François Chopin and his sublime piano music. Hania Allen (right) describes herself as a pianist who makes up in enthusiasm what she lacks in talent, but under the fingers of DS Gorska, the great man’s preludes and nocturnes shimmer and sparkle throughout the pages, and the darker notes of the Polish soul are never far away.

The events in The Polish Detective take place on the eve of the June 2016 EU referendum, the result of which I suspect Hania Allen disapproves, as she has her heroine declaring at one point, that Chopin was “ also a European, as we all are..” I live in a town full of lovely Polskie people who have come to Britain in the last fifteen years or so, and those that I know well are intensely proud – in the best way possible – of their nation and its culture. Dania Gorska’s claim, therefore, may be something of a leap of faith, but Hania Allen makes a serious point about the debt this country owes to Polish men and women stretching back to the dark days of WW2.

Politics aside, Hania Allen may be allowed self deprecation of her skills as a pianist, but on this evidence there is do doubt whatsoever about her skills as a crime novelist. The Polish Detective is tautly plotted, full of intriguing characters and settings, with a thoroughly engaging new central character. It is published by Constable and is out in paperback on 9th August.

Fans of Scottish crime fiction might like to see what Fully Booked has in the way of reviews and features centred on this popular genre. Click the blue link to see what’s on offer.