THE HOUSE … Between the covers

Do houses have souls? Do they retain some of the psychological warmth – or chills – of the people who have lived there previously? When a young couple, against the run of play in terms of the asking price, find themselves proud owners of a higgledy-piggledy house, they can’t believe their luck The previous owner has struck lucky in the romance game, albeit late in life, and has hotfooted it to Australia to be with his love. He has left the house ‘as found’, and this includes paintings, random stuffed animals and a plethora of clutter. And the ‘soul’ of this house? Once rid of the examples of the taxidermists’ art, Jack and Syd begin to transform the house into something more reflective of their own moods and personalities. 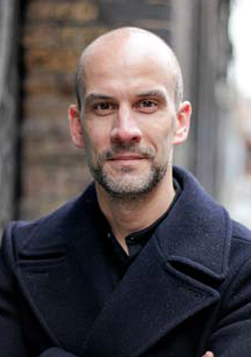 There is, however, that strange smell. A certain je ne sais quoi which will not go away, despite the couple’s best efforts. When Jack finally plucks up the courage to climb up into the roof space, he finds the physical source of the smell but unpleasant as that is, he also finds something which is much more disturbing. Simon Lelic (right) then has us walking on pins and needles as he unwraps a plot which involves obsession, child abuse, psychological torture and plain old-fashioned violence.

The novel does pose one or two challenges. The first is that we have two narrators, Syd and Jack. We see events retrospectively. At some point we learn that they have challenged each other to write up their personal version of what has happened. Inevitably, their stories are not identical. While this is part of the charm, we do have to ask ourselves the key questions,”do we trust Syd or do we trust Jack? Do we believe both – or neither?”

This leads to the second challenge, and it concerns our judgment about the personality of the two individuals. I can only tell it as I see it, and for what it’s worth, neither came over as being particularly likeable. I am sure that there are dozens – hundreds, maybe tens of thousands – of perfectly worthy people who work in and on the fringes of the social services, but in fiction – and the perception of some journalists – there exists a stereotype. He or she is mild mannered, anxious, keen to please and with a tendency to be naively trusting when dealing with people (I believe ‘clients’ is the preferred word) who are scrabbling around, for whatever reason, at the fringes of comfortable society. Jack certainly has all his ducks in a row here.

Syd, by contrast, is spiky enough to give the biggest Saguaro cactus a run for its money. Of course, Lelic doesn’t just shove her on stage and make her behave badly without giving us her backstory. It is a pretty grim narrative and, trying to avoid any spoilers, I have to say that it is fundamental to what happens in the book.

This is a genuinely disturbing psychological thriller, and we are kept guessing almost until the last page as we try to make sense of what has happened. Not all new novels live up to the entertaining and inventive hype which precedes their publication, but this one certainly does. The House, by Simon Lelic, is published by Penguin and is out now on Kindle, and will be available in paperback from 2nd November.