THE WALLS … Between the covers

Lone mother. Single parent. Solo carer. Whatever the politically correct term currently favoured by The Taking-Offence Police, Kristy Tucker is it. Not only is she bringing up her teenage son Ryan, she is caring for her debilitated father. ‘Pops’ is paying the price for a lifetime of heavy smoking, and two things keep him alive. One is physical – the cannula connecting him to his oxygen tank – and the other is psychological – the faint hope that he can still be a father to his daughter and someone his grandson can look up to. 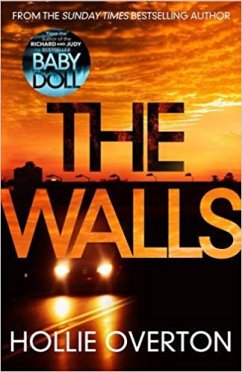 Kristy puts food on the table and tries to make sure that Ryan isn’t disadvantaged. She has a job, and it is one that demands every ounce of her compassion and every droplet of her sang froid. Her official title? Public Information Officer for the Texas Department of Criminal Justice. If that sounds like some bureaucratic walk-in-the-park, think again. Acting as mediator between inmates, the press and the prison system is one thing, but remember that The Lone Star State is one of the thirty one American states which retains the death penalty. Consequently, Kristy not only has to manage the fraught liaison between prisoners on death row and the media, but she is also required to be an official witness at executions.

Despite the stresses and strains of her professional and family life, Kristy is still young enough to hanker after a personal life, and when Ryan introduces his martial arts teacher, Lance Dobson, she is taken aback by his kindness and his humility. It doesn’t hurt that he is ruggedly handsome and totally charming. Dobson becomes more and more a part of the Tucker household and, despite Dobson’s “aw, shucks..” modesty, Kristy finds herself falling in love with him. She is dazzled by the man, and cannot believe her luck when her affection is returned, with interest, and he asks her to marry him.

Back at the prison, Kristy Tucker has become involved with a condemned prisoner, Clifton Harris. He has been sentenced to death for starting a fire which killed his two children. There have been frequent appeals and stays of execution, but Harris’s last ride on the gurney of death is imminent. Kristy becomes convinced that Harris is innocent, but her profession inhibits her from offering anything but sympathy and a kindly voice.

All too soon, Kristy becomes Mrs Dobson, and both Ryan and Pops think all their Christmases have come at once. For Ryan, Lance Dobson becomes the father he never had, and Pops takes on a new lease of life, knowing that at long last there is an alpha male in the house to take on the duty of care which his illness has prevented him from fulfilling. Gold at the end of the rainbow? Not quite. Within a matter of weeks a fatal chasm begins to open up between Dobson’s public persona and the man he has become when alone with Kristy. He is insanely jealous, sexually demanding, domineering – and brutal with his fists. Despite Ryan and Pops still worshipping the ground that Lance Dobson walks on, Kristy has finally had enough. Using her unique insight into the mistakes made both by criminals and police, she plans a route which will take her out of her misery.

It will come as no surprise to learn that Hollie Overton (right) is an experienced writer for TV. In The Walls every set-piece, every scene is intensely visual and immediate. With consummate cleverness she sets up two story lines which at first run parallel, but then converge. Two men. One is definitely guilty. One possibly innocent. Both are condemned to death. One by the State of Texas. The other by his battered wife.

The Walls is a sheer joy to read. The pace of the narrative is breathtaking, the characters are beautifully drawn and utterly convincing. Of course Hollie Overton takes sides, and she expects us to do the same, but we can still hold our breath and chew our nails until the final pages. This is domestic drama at its very best. The Walls is out on 10th August in the UK, published by Century, and is available here.